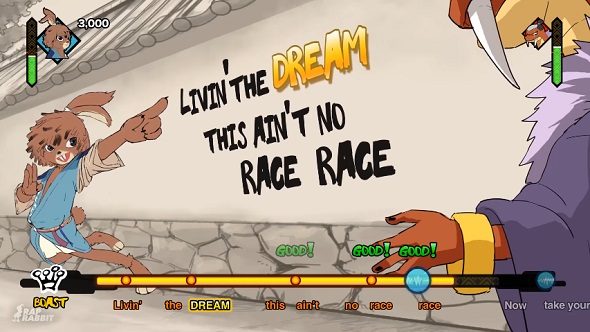 As its Kickstarter rolls on, Project Rap Rabbit’s development team have released a video, showing the game’s lyrical combat system in action. In the footage, the loquacious rabbit rap battles a samurai snake in order to continue his journey.

Learn more about Project Rap Rabbit with our interview with producer Keiichi Yano.

Being a prototype, everything in this footage is still a work-in-progress. The full game will feature full 3D backgrounds and “rich character animation” according the video’s end slate, with the scenario just being a demo of your typical rap battle. There will be multiple turns within your standard face-off, with both you and your opponent getting a chance to spit some super hot fire. As for the actual rapping and lyrics, these were done by producer Keiichi Yano who is definitely not a rapper. Expect better voice-acting and slicker rhymes in the full game.

As for the actual gameplay, it’s split into a listening phase and a rapping phase. As your opponent begins their lyrical onslaught, the player needs to hit specific buttons in order to form potential verbal ripostes, based on their opponent’s words. From there, rappers can choose between a boastful response, a jokey retort, a coercive reply, or simply laughing off their opponent’s jibes.

Each opponent is weak to certain responses, so choose carefully when trying to best them. For this prototype battle, the snake’s pride makes him weak to being made fun of, so a boastful response is the way to win.

Based on the current state of Project Rap Rabbit’s Kickstarter, it may end up as just a prototype. At time of writing, the Kickstarter isn’t even a quarter of the way to its funding goal and there are only nine days left. Its sudden U-turn on its stretch goals did not inspire confidence for potential backers, and the lack of this prototype footage on the launch of the Kickstarter caused many to wonder how Project Rap Rabbit would actually play. Unless there is a massive funding surge or a publisher picks up the project, this lyrical adventure may fall on deaf ears.