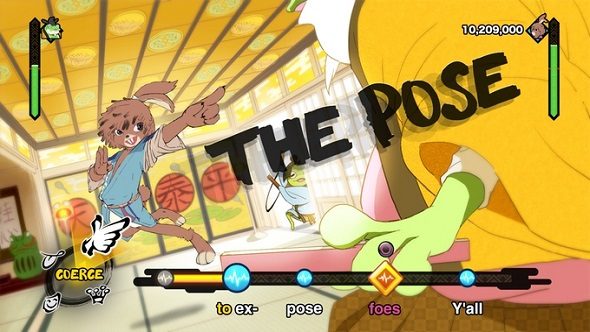 The creators of PaRappa the Rapper and Gitaroo Man are pitching a new game on Kickstarter, positioning it as the next evolution in rhythm-action titles. Where PaRappa the Rapper was a game about pushing buttons, Project Rap Rabbit blends dialogue choices with button inputs to create dynamic rap battles.

If it’s funded, that’s another one you can add to our upcoming PC games list.

The project is currently on Kickstarter and is asking for a considerable £855,000, which it’s currently nowhere near. That said, there are still 17 days to go, so fingers crossed because it genuinely looks lovely.

It just depends on whether there’s an appetite for this sort of game these days. That’s why we asked Gitaroo Man creator Keiichi Yano why he thought now was the time for a rhythm action revival.

“The best way to explain the timing is simply – serendipity,” says Keiichi. “A mix of things occurred that allowed all of us to consider the opportunity. An independent publisher that wanted to release a fully original Japanese game, iNiS J being open to the opportunity and having availability, and NanaOn-Sha also having availability. It also feels like it’s time to revisit the story-led rhythm-action genre and coincidentally, the remaster of PaRappa the Rapper seemed to back that up. It was really a lot of the right things at the right time.”

As for Kickstarter as the launch platform, that’s because traditional publishers aren’t willing to risk the genre these days. Kickstarter also happens to have a sizeable Japanese audience, hence why it was chosen over other crowdfunding platforms. The developers are hoping to capture that nostalgia for rhythm action, just as so many successful game Kickstarters have leveraged that longing in other genres.

“It would be silly of me to claim that Project Rap Rabbit won’t appeal to fans of our earlier music titles given that it’s the same genre,” explains Keiichi. “Project Rap Rabbit does indeed take elements from our previous titles, including PaRappa The Rapper, Gitaroo Man, and Osu! Tatakae! Ouendan/Elite Beat Agents. However, we’ve never been interested in just remaking what’s been done before and putting out a game that offers nothing new. Project Rap Rabbit exists because we feel that there’s so much more room for growth when it comes to story-led rhythm-action games, and we would desperately love to explore that future and help shape the next great innovations in the genre. That nostalgia factor is great, but it’s not something we want to trade on.”

With lifelong PC players, that nostalgia probably doesn’t even exist. I mean, this is clearly marketed at people who grew up with PlayStation, which is why it would make a novel addition on PC. It does make you wonder why they’d bother bringing it to PC in the first place, but Keiichi says a lot of that is to do with the narrowing gap between PC and console architecture. These days, it’s more a case of: why wouldn’t you do PC?

“Our team is small, and in the past when consoles and PCs were markedly different platforms to develop for, our resource levels prevented us from considering all platforms,” says Keiichi. “Now that it’s much easier to port a PC project to consoles, we feel confident in our ability to make a highly-polished game that takes full advantage of every platform. Given that the theme of Project Rap Rabbit’s story is all about bringing people together, we were eager to create this game for as many people as possible. We want to give PC players the opportunity to play a lovingly-crafted, story-led rhythm action game – and we’re sure that they will embrace it.”

If you want to support it, head to the Project Rap Rabbit Kickstarter page.