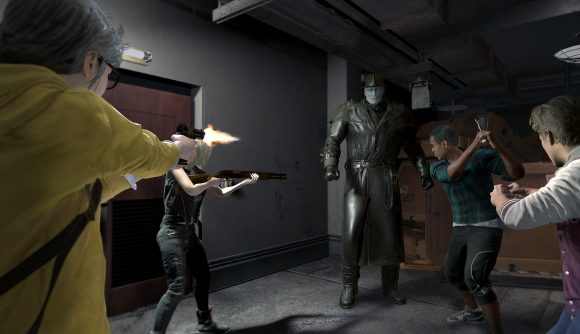 Project Resistance is set in the world of Resident Evil, but there’s a reason its working title isn’t fully branded with the name of the survival horror series. It’s a 4v1 multiplayer game that looks to be pulling a whole lot from popular games like Dead by Daylight. Fans of traditional survival horror aren’t altogether happy about the new direction, but Capcom producer Matt Walker says it’s important for the company to branch out – and that the new game is true to the old spirit.

“It’s totally valid that people want more of that quality core experience offered in Resident Evil 2 and Resident Evil 7,” Walker says on Twitter. “My take – we as a company need to continue to branch out and try to offer up new gameplay in addition to refining the experiences people expect from us. If we just continue to offer up the same thing over and over again, people will gradually lose interest with what we’re making.”

Walker says “the most important part” is that “it’s a great survival horror experience, if non-traditional.”

The upcoming closed beta – console only for now – will give players a chance to see how the project is shaping up. Walker says “people who have played it have been positive,” and the beta will give Capcom the chance to further refine the game based on how a wider selection of players respond.

“Based on that feedback,” Walker says Project Resistance “could grow from a project to a fantastic game.”

Multiplayer takes on Resident Evil have run hot and cold over the years. Resident Evil Outbreak has some dedicated fans, but we all prefer not to talk about the more recent Umbrella Corps. Project Resistance at least has the benefit of Capcom’s RE Engine, which has powered many of the publisher’s biggest hits over the past handful of years.

At a minimum, it doesn’t look like Capcom has any plans to abandon the traditional RE formula. It wasn’t even eight months ago that we got a game-of-the-year-caliber remake of one of the best titles in the series.