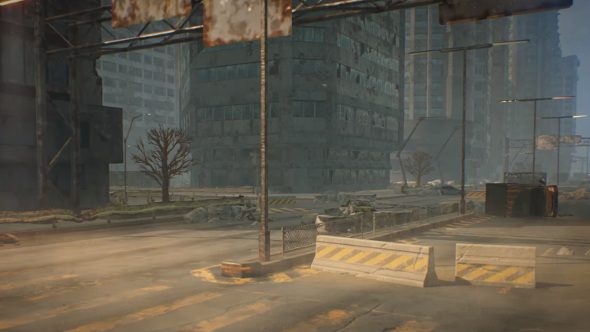 Bandai Namco have revealed a teaser trailer for a mystery game currently titled #Projekt1514. There’s not very much to go on, but we do know that it will feature a post-apocalyptic cityscape and bullets. So it’s definitely a videogame.

Speaking of the apocalypse, here are the best survival games on PC.

“Which world is this? What are they fighting for?” These are the questions Bandai Namco are posing, offering up few answers. But I don’t get paid to tell you nothing, so let’s make some educated guesses. What is #Projekt1514?

One detail that the trailer does offer is that the game is being developed by Dimps, the studio behind countless games and ports but most notably the Dragonball Xenoverse titles and Freedom Wars for the PS Vita. The teaser reminds me most of the latter, but it also calls this a “new project”, perhaps implying an entirely new IP. It’s also not necessarily set on Earth, or at least not our Earth.

Typically Dimps don’t develop titles for PC, though over the last couple of years this has started to change. Both Dragonball Xenoverse games, for instance, launched on PC.

We’ll keep you up to speed as we learn more.