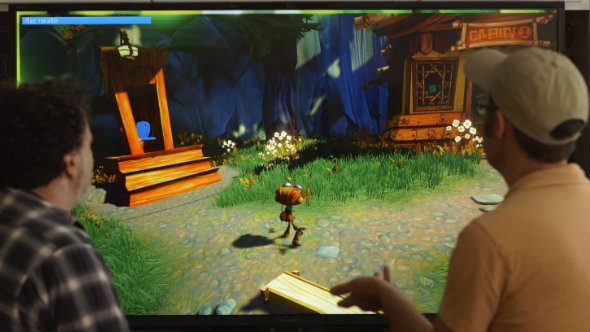 Psychonauts 2 is all funded after pulling in almost $4 million during its Fig crowdfunding campaign, and now developers Double Fine have released a video showing off how the game’s shaping up.

Keep an eye on what’s coming with our list of upcoming PC games.

Psychonautsisn’t due for release until 2018, but even with placeholder assets and a skybox ripped straight from the first game, that prototype footage above is looking gorgeous.

It looks lovely and colourful, with the whole scene popping with little details. You just want to bound around inside it, and you will once it’s finished; double jumping, gliding and running on top of a transparent sphere.

I missed the first game, but this sequel is still calling to me after seeing this little demonstration. I can’t wait to see how it looks in 2018.

The area you see in the video was built as part of an internal art test, so you won’t see it in the game. That means there’s no need to worry about spoilers and you can watch the video without fear.

This video follows last week’s news that non-accreddited Fig investors could now pay off their reservations, so Double Fine just got a bucket load of the crowdfunding cash. It’s only fair we get a little taste of where it’s going.