Early in Psychonauts 2 – which you can buy here, coincidentally – the acting head of the titular psychic spy organisation tells our hero Raz that “we’re not here to change people’s minds. Not here to ‘fix’ people. We’re here to help people fight their own demons.” Psychonauts 2 is better than the original in every way: its characters are better realised, its story is more empathetic, its controls are far more precise, and its levels perfectly balance creative art design and entertaining platforming. This is Double Fine’s best game.

While the villainous Maligula hasn’t quite returned for the sequel, enemies of the Psychonauts are working hard to resurrect her, and have installed a mole in the organisation to aid in their misdeeds. But the bulk of the game is spent trying to recruit the help of the Psychonauts’ founding members, each of whom is trying – unsuccessfully – to deal with the trauma of the original encounter with Maligula. That means you, as Raz, are going to be diving into another round of brains to explore a fresh set of mental worlds.

Psychonauts 2 is still absolutely a comedy, but the issues it deals with are grounded in an understanding of mental health that has evolved and matured over the 15 years since the original. Where the previous game’s mental worlds were essentially caricatures – a wargame in the mind of someone who believes he’s related to Napoleon, or an endless dance party in the mind of a swinging ’60s spy – the levels in Psychonauts 2 are built from more relatable concerns. You’ll meet an alcoholic whose mental world is a literal ocean of regret with piles of empty bottles just below the surface. Another character’s social anxiety and self-imposed isolation has created a mental world where their friends offer judgements like “slightly better than a mouthful of nails” on a high-stakes cookery game show.

While it’s been well over a decade since the release of the original Psychonauts, the sequel picks up just days after its ending, and only minutes after the conclusion of Rhombus of Ruin, the VR interquel. Raz still has many of the same abilities he had in the original game, and the mental worlds are built in similar ways, with the same sorts of collectables. There’s emotional baggage to be sorted by finding the appropriate luggage tags, figments rank you up over time for improved abilities, and memory vaults that contain illustrated versions of a person’s repressed memories. Structurally, it all feels very familiar. 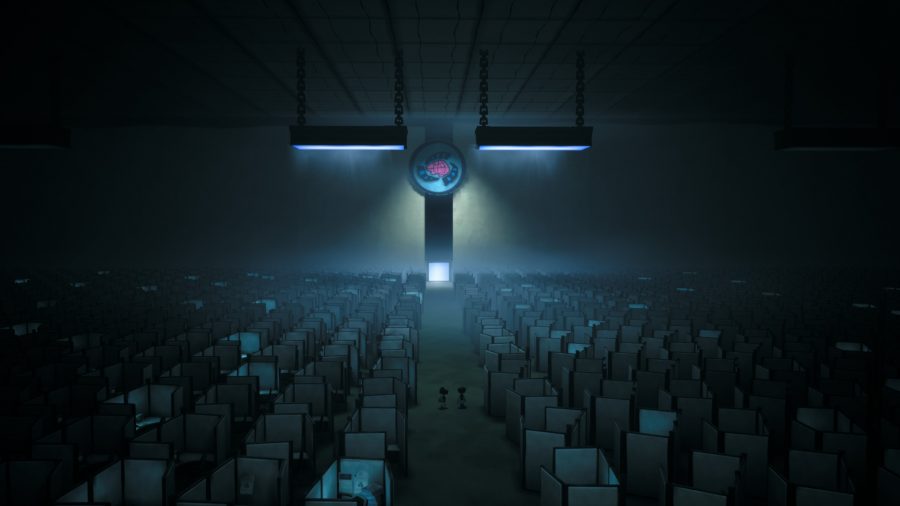 But the original Psychonauts had a feeling of ‘this is good, but’. The art style was inspired, but the level structure was a bit undercooked compared to some of its contemporary platformers. The characters were delightful, but the controls were mushy, so getting to each new story beat felt more frustrating than it should have. The ‘but’  is gone in Psychonauts 2. Raz doesn’t have the freewheeling flow of Mario, but he jumps where you want him to, and the levels are built smoothly around his abilities.

Every single level in Psychonauts 2 is a winner, too. Each has a clear, consistent, and distinct aesthetic, and they all offer varied pacing and mechanics. You’ll find levels built around straightforward platforming challenges, others loaded with puzzles to solve, some with open-ended exploration, and still more built around clever minigames. This is classic Nintendo level design, where you’re introduced to a mechanic, asked to use it in increasingly challenging ways, and then whisked away to something fresh.

One level puts you in the mind of a familiar character who’s now managing a bowling alley – and repressing the memory of losing a romantic partner. Their mental world takes the form of a city on the verge of annihilation, with bowling pin-shaped citizens shouting ‘the end is nigh’ while you ride a bowling ball along a treacherous course, Marble Madness-style. It’s a mechanically complete and visually stunning level that lasts for all of maybe 30 minutes before you’re onto the next thing. Nothing in Psychonauts 2 overstays its welcome. 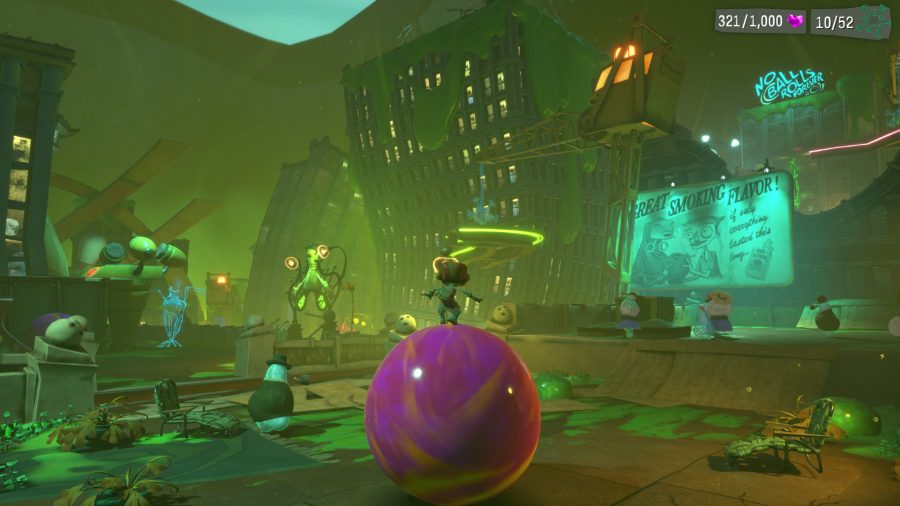 Then there’s the aforementioned game show level. Here, you’ve got to take ingredients – who are also anthropomorphic audience members – to various parts of the stage to be chopped, boiled, blended, or fried. If you do it within the time limit you get a bonus item, and this creates an Overcooked-like time crunch that encourages you to figure out the most efficient path between each kitchen tool through the criss-crossing paths that make up the level. In between each challenge you get caught up in a ‘commercial break’, where you’re assaulted by enemies dressed up in ’70s TV-appropriate gold sequins.

The cooking level is hilarious, but it’s tinged with sadness – it is, after all, a mental construct representing someone’s fear of judgement. But that’s part of why the levels in Psychonauts 2 work so well, as all these mechanics are grounded in a story that, for all its psychic spy shenanigans, often feels very real. One of the most treasured levels in the original Psychonauts is The Milkman Conspiracy, because it’s the stage that most effectively marries its aesthetic and the overarching story to the structure of the level itself. Every mental world in Psychonauts 2 does that just as effectively. 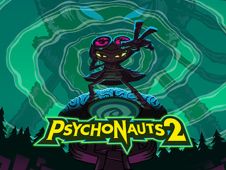 Psychonauts 2 hasn’t lost the sarcastic edge of the original, and there are still plenty of gags about exploding heads and unfortunate collateral damage to woodland creatures, most of which land with a laugh. But this is also clearly a game that has benefited from 15 years of increased cultural understanding about mental health. It’s kinder and more empathetic. 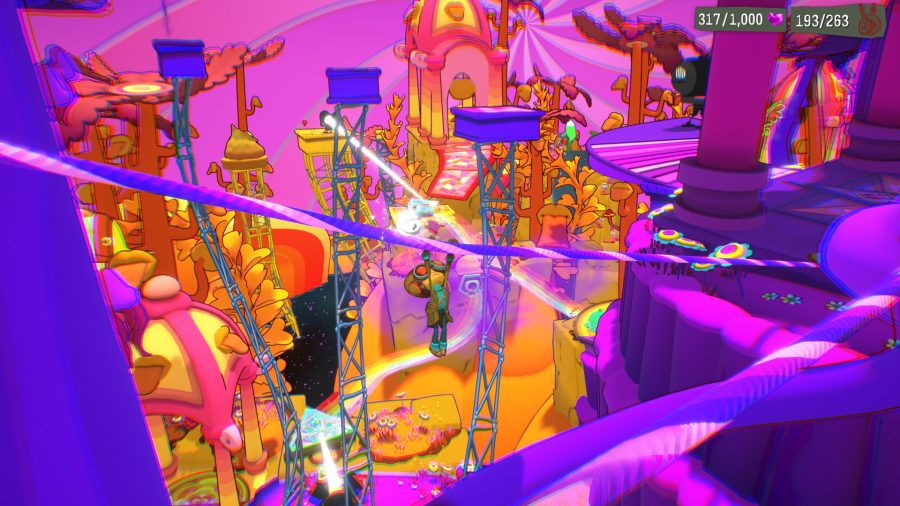 It’s all gorgeous, too. The technical merits of Psychonauts 2 aren’t especially impressive, but the art design is astounding. Every inch of the mental worlds is built to draw your eye toward some new vista of Dali-esque surrealism. One set of stages in particular, where you have to help a brain in a jar reconnect with the senses of a physical body, somehow manages to take the well-worn tropes of psychedelia and synesthesia and weave them into something that feels totally distinct.

All these mental worlds are linked together by exploration in the physical world. Here you can take your time exploring and hunting collectables to power up Raz’s abilities. The wide array of tchotchkes you can collect are evenly distributed to draw you off the beaten path towards fun, optional challenges without swallowing you up in a massive checklist of random junk. That’s a tough balance for any 3D platforming game to manage, and Psychonauts 2 handles it perfectly.

The rewards you get from all that exploration feel useful, but the game is a bit too easy for them to actually matter. You can spend upgrade points increasing the power of Raz’s combat abilities, like increasing the radius of your fire blast, or making your basic psi-blast ricochet between enemies. However, there are so many health pickups that you can easily get through most of the game relying on just a handful of basic moves. 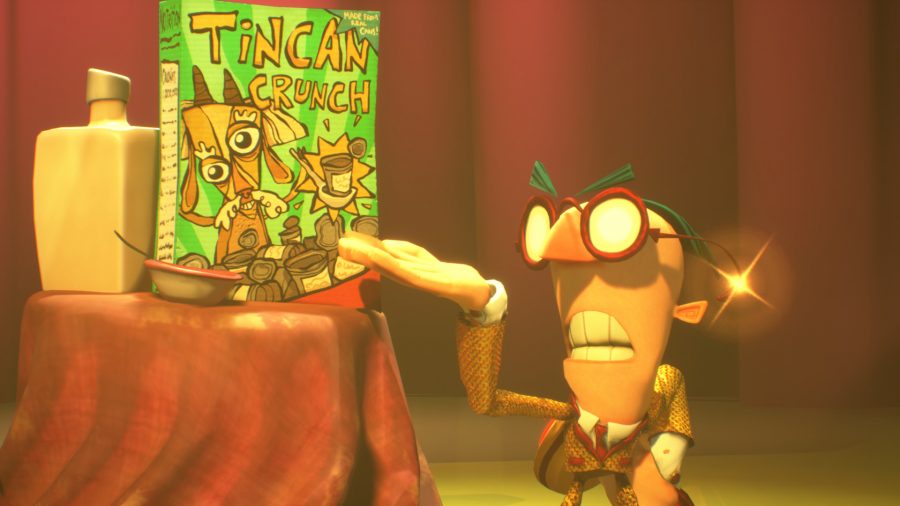 Combat can feel satisfying as there’s a tremendous variety of enemies, and each one can be countered in a few different ways. One enemy will provide an impenetrable shield for another, and is very effective at both dodging your attacks and pushing you away if you get too close. You can use a time-slowing power to get in close and deal some damage, or you could set them on fire to force them to drop the shield, letting you pelt the previously protected enemy with melee strikes.

Related: Here are the best adventure games on PC

The fights can be fun, and the powers are versatile enough to encourage you to use them in multiple ways, but by the end of the game I found myself resorting to mashing basic attacks and setting everyone on fire.

This is Double Fine's best game

This is mostly because switching up your combat style is more annoying than it should be. You only have access to four of your powers at a time and if you want to use another you’ll need to open your power wheel, assign that ability to a button, and then retrain your muscle memory to remember which button corresponds to which ability. It only takes a few seconds, but you’ll go through those few seconds multiple times in a single fight, which drags down the pace of an otherwise rewarding combat system. 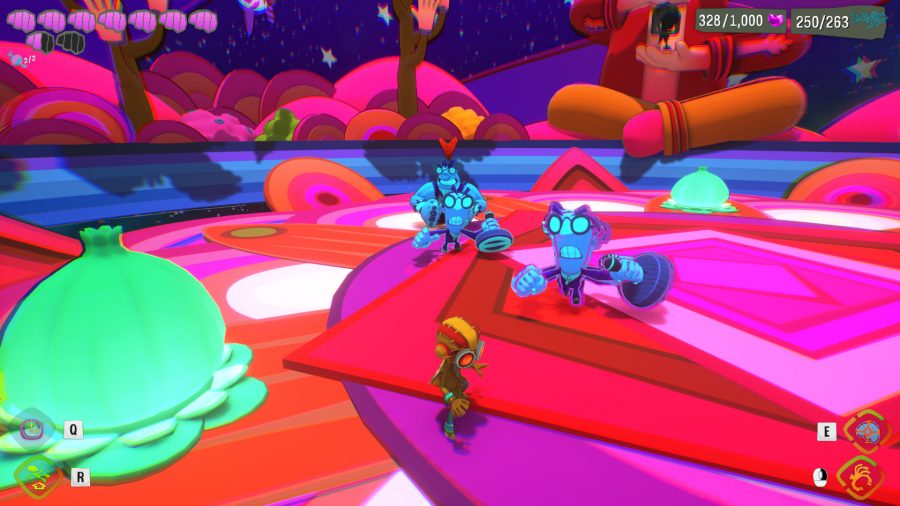 The PC version is largely great, though I ran into the odd stutter, mostly when destroying objects within a few seconds of entering a world for the first time. That’s a minor issue, but a frustrating one to experience on a machine that far exceeds the recommended specs. The PC version is also lacking HDR, which the Xbox Series X and S editions support. The HDR implementation was often stunning in my brief time with the console version, and it’s disappointing to be missing that feature on PC.

In the end, those very slight technical grumbles and some occasionally flat combat encounters do very little to detract from Psychonauts 2’s overall appeal. The entire campaign – which you can expect to run for between ten and 15 hours – is rich and rewarding. It’s filled with memorable characters, the visual design is breathtaking, the story expertly paced, and there’s so much variety at every turn.

A rare sequel that improves on the original in every meaningful way. It's packed to the brim with beautiful worlds and surprising interactions, and its colourful cast is equal parts funny, believable, and sympathetic. Double Fine is rarely wide of the mark, but this time it hit the bullseye.