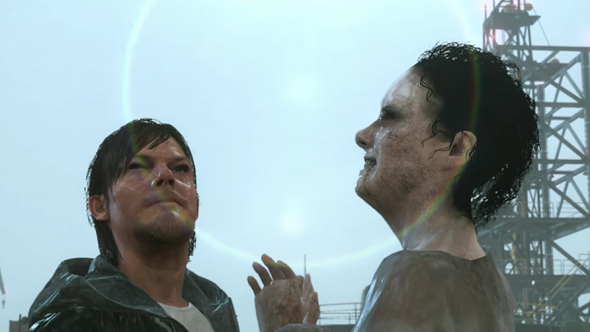 Silent Hills might be dead, but public interest certainly isn’t. People have been digging into the files of P.T., the game’s playable teaser created by Hideo Kojima and Guillermo Del Toro, pulling out the assets and laying out all its secrets. Brilliantly, this has led to a video of P.T.’s ghost, Lisa, playfully flirting with Norman Reedus in the rain, flicking water at him, rubbing herself sensually and presenting him with a fetus like it’s a bouquet of flowers and not a screaming hell baby.

If that steamy scene has got you in the mood, check out our list of the best sex games. (Sorry).

Remember that cringe-filled scene from Metal Gear Solid V where Quiet dances in the rain, rolling around on the floor and bending over while the camera zooms in on her arse? Somehow it’s better with a ghost. Even when Norman Reedus takes the place of Snake and is holding a fetus instead of a gun, it’s more tasteful, as you can see in the video embedded above.

It also makes about as much sense as the second trailer for Kojima’s next game, Death Stranding, which also has a fetus in it. Whether it has a photosynthesis woman assassin in it is thus far unconfirmed, however. This wonderful video is only possible because of that datamining,which is all laid out on the Facepunch forumsand contains some unused character models and some other bits. None of it outshines this video, though.

This particular bit of editing genius comes from Lakitouille on YouTube, a video creator who makes all sorts of daft MGSV content. I particularly like the way this one ends, with Kojima replacing Quiet in the shower, while Norman Reedus and Lisa watch. It’s kinda poetic.