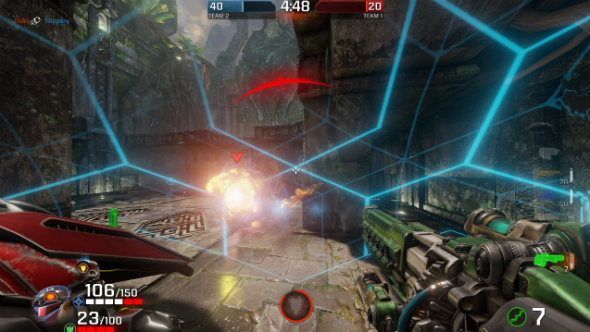 As any Quake pro or wikiHow page will tell you, map knowledge is the key to gitting gud at Quake multiplayer. You need to know every narrow corridor and central hub like the back of your hand: how every passage connects, where the best pickups spawn, and areas to avoid when another player has the quad. A good Quake player traverses an arena at breakneck speed, hoovering up weapons and armour, and rocket jumping across gaps you didn’t realise existed – it’s balletic. Only three arenas have been revealed for Quake Champions so far, but it’s already clear that the character abilities of all nine Champions work seamlessly with id Software’s level design.

Tim Willits’ role as lead designer on Quake Champions is apparent from a brief fly-through of each of its arenas; save for the graphical improvements, each one bears all the hallmarks of his previous work. They all feel as tall and deep as they are wide, and you can never predict where an enemy is going to appear from, whether you’re sprinting across a bridge or riding an elevator up to the highest level. Jump pads dictate the most obvious routes for players to take on their way to the essential pickups, but rocket jumps and tucked-away staircases provide enough of an alternative to ensure no path is safe. Likewise, the promise of finding a useful pickup, regardless of what course you take, means every inch of map comes into play during a match. They force you to think on your feet, to be ready for anything.

The action is everywhere, which leaves no room for situational character abilities. Thankfully then, nearly every primary ability in Quake Champions can be adapted to suit any scenario in the arena, whether that’s escaping a group of enemies, locking down a key map point, or emerging victorious from a tense duel. 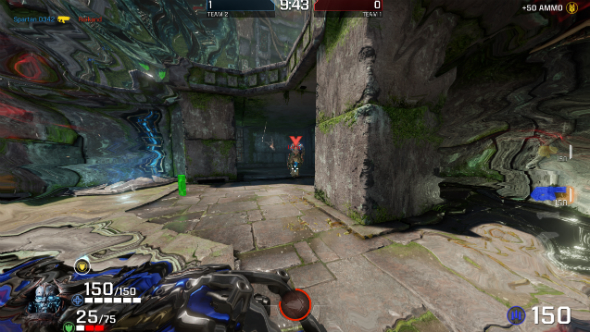 For example, Scalebearer’s Bull Rush ability can be used in a 1vs1 bouts as a last-ditch effort to get the frag, or it can be used in busy corridors to rack up multiple kills at once. The longer you’re able to charge with Bull Rush without being interrupted, the more damage you’ll inflict on whoever’s unlucky enough to find themselves in your way. Quake Champions’ arenas feature a lot of gentle, sweeping curves and arrow-straight channels that are ideal for Scalebearer to surge through. To assuage any fears that this is unfair, there are very, very few situations in Quake Champions where you can’t escape an incoming attack – it just takes presence of mind. Bull Rush also makes Scalebearer particularly adept at dominating pickups, as he can swoop in, shrug off heaps of damage, and crush any unsuspecting enemies in a matter of seconds. Holding the quad when there’s a Scalebearer nearby is futile.

While Scalebearer’s Bull Rush ability is lethal on level ground with an enemy, it offers him no advantages in aerial duels, which form a key part of Quake’s moment-to-moment gameplay. Heavyweight, Scalebearer’s passive ability, ensures he’s also got something to offer in vertical battles. Employing his substantial weight to lethal effect, Scalebearer can deal damage simply by landing on enemies; the faster he’s moving, the more damage it deals. Spotting foes two levels below you is common in an arena like Blood Covenant, and if you’re quick and accurate enough you can pick up a quick frag just by dropping on top of them. If you haven’t got height on your side you can even do a rocket jump to gain some momentum with which to crush your opponent. 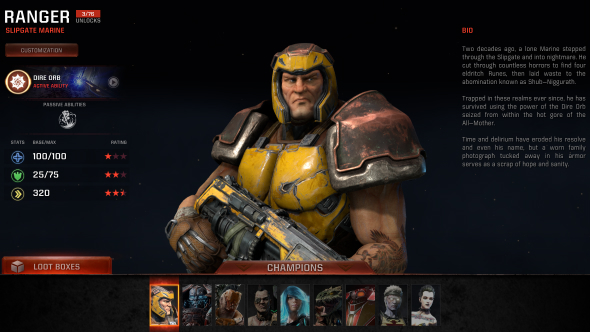 Area control is another key component of Quake multiplayer, because your team will have a hefty advantage if you are able to lock down the rocket launcher or railgun spawn: Sorlag, Clutch, and Galena are all excellent candidates for the job. Sorlag’s Acid Spit primary ability, for example, can be used to cover either a pickup or doorway dealing plenty of damage to any enemy foolish enough to pass over it. Likewise, Clutch’s Barrier offers total protection from incoming fire, making it possible to block off entire corridors for short bursts of time. Finally, Galena’s Unholy Totem, which heals teammates within its range, is ideal for occupying busy areas like the Eye of Cthalha room on Ruins of Sarnath or the main bridge on Burial Chamber.

Of course Quake isn’t all about securing map points, and each of the aforementioned abilities can also be used on the fly to lethal effect. Sorlag’s Acid Spit sticks to enemies it hits directly, dealing stacks of damage over time. Unloading the ability on someone you’re duelling with is a sure-fire way of getting a frag as it gives you an enormous DPS boost, making it particularly effective at netting kills and assists from beyond the grave. Unlike traditional shield-conjurers in character shooters, Clutch can shoot from behind its shield, which means no relying on teammates to have your back. While firing from behind the shield removes its defensive qualities for a split-second, when you’re using the shotgun, railgun or rocket launcher, a split-second is all you need. It’s also a perfect tool for engaging an enemy with quad damage, or a railgun pro. 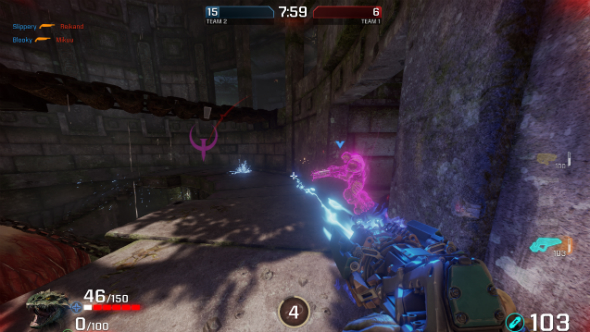 Even Galena’s healing Unholy Totem can be used to lethal effect. In a multiplayer game with a particular emphasis on movement and speed, a proximity mine is a devious tool, and that’s exactly what the Unholy Totem turns into when an enemy crosses its path. Placed on likely landing spots, by pickups and tucked around corners, the Unholy Totem is as effective at healing teammates as it is racking up frags or shaking enemies off your tail.

Abilities don’t slow the game speed at all. Quake Champions is as relentlessly fast as its predecessors. The intricate design of each arena ensures the action is always spread out evenly – there are no safe spots or corners to hide in – and that meshes beautifully with Quake Champions’ style of character abilities, that of quick-fire, reactive, and high-impact skills that can be used in any situation.

It’s certainly fitting that Ranger – Quake’s ever-present protagonist and the only free Champion – embodies this design philosophy with his Dire Orb primary ability. It’s obvious use is as a teleportation device that can grant you speedy access to any ledge in sight, but it can also be employed as a stylish means of dispatch if you time the teleport so that you spawn inside an enemy, killing them instantly. Success in the arena hinges on how well you know its layout, how quickly you can traverse it, and whether you have the composure to either evade a foe or finish them off – as always was, is, and ever shall be. The addition of character abilities only emphasises the skill gap between players.