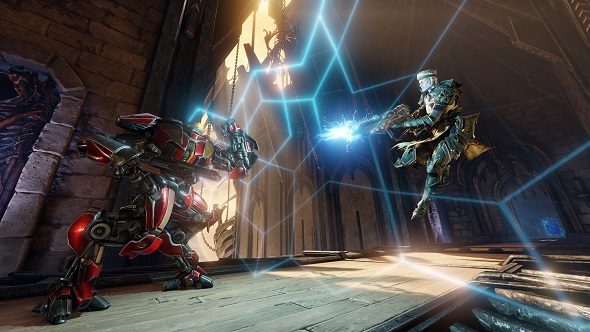 With the Quake: Champions beta removing its NDA, we now know what shape the Duel mode – Quake’s legendary one-on-one test of skill – will take. Essentially, it’s a draft, each player choosing three champions to battle their opponent. First to eliminate all of their opponent’s picks wins a round, a match is best-of-three rounds.

For the best FPS games there are to play right now, check our definitive list.

It’s massively different from the time-based duel that’s served Quake since the Arena days. Most notably, there won’t be quite as much snowballing – the most you can get ahead is however much armour and weaponry you can pick up over the three lives of your opponent. That, as well as all the obvious impacts of the Champions themselves, makes it practically a whole different game.

As noted below, pros were testing the mode as recently as March, so id aren’t taking it lightly. There’s room within that system to simply play Champions as an updated Q3 – a full mirror match with only certain characters allowed – but that game still exists. Id, clearly, are aiming to adapt to a new audience, as well as convince their old one what they’ve got is enough of the game they remember.

Original story March 12, 2017:Pulled kicking and screaming into the modern world of heroes and champions as it may be, Quake is back. What that means is that Quake Champions will need Duel, the fast-paced, impossibly skill-testing one-on-one mode that is still almost unmatched in the world of eSports. It’s being worked on right now and Tim Willits, studio director over at the developer, has a few, tantalising hints to give on it.

“There is a hole with one-versus-one, it’s missing from first-person eSports,” says Willits at PAX East, where the game is being demoed publically for the first time. “The title fights are great for Quake so our Duel mode is going to be uniquely Quake, but will still incorporate the champions.”

This may disappoint some who were hoping Quake Champions would remain true to the first half of its name for the most competitive mode. However, having now played it – for which we’ll bring you a proper preview soon – they are a significant modification to the formula, but not one that utterly changes it. Abilities or differences in move speed and air control are all simply another tool.

Plus, the pros are on board. “We have Duels [working in-game] but we need to get more pro players to play it, just to make sure they like it. We have some coming up to id next week,” explains Willits. He also mentions that id were at IEM Katowice, with a small room at the back of the business area not open to press or general public. This was similar to how the game was tested around QuakeCon.

“We’ve been listening to [the pros] too, at Quakecon last year the pro players came in, they played our team mode and they were like ‘yeah you gotta change this’, we said okay, we started changing it,” remembers Willits.

We’re taking bets as to how this new Duel will be built in the comments below. Perhaps a mirror system where characters are treated like maps, both players picking the same one to test their skill? Or some sort of pick/ban, where you have a range of champions to play, deciding depending on map? We’ll find out more soon.