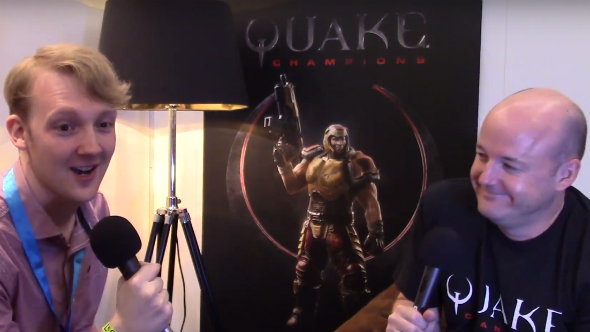 Quake Champions – the next evolution of id’s legendary first-person shooter franchise – is sounding better and better every time we hear about it. And thankfully Gamescom 2016 is happening right now, so we get to hear about it a bit more as our Matt got the chance to sit down with id’s studio director Tim Willits and ask him all about the frag-tastic arena shooter.

Enjoy the above video? Head to our YouTube channel and give us a like, we’re worth it.

For starters we get a full rundown of the Champions that have been confirmed so far, including more specific detail on Anarki’s special ability – turns out he can inject himself with a wrist-mounted needle to heal up. You can watch the full interview above.

Willits also talks about how Quake Champions is attempting to reconcile the differences between the original Quake and Quake III Arena. “What our vision for Champions is, was to take some of the visual style and inspiration from the original Quake, which has Lovecraftian architecture and feels techno-gothic, and then incorporate some of the gameplay from Quake III Arena”.

The interview also covers the specifics of rocket jumping in Quake Champions, air control tactics, and id’s collaboration with Sabre to create the game’s hybrid engine.