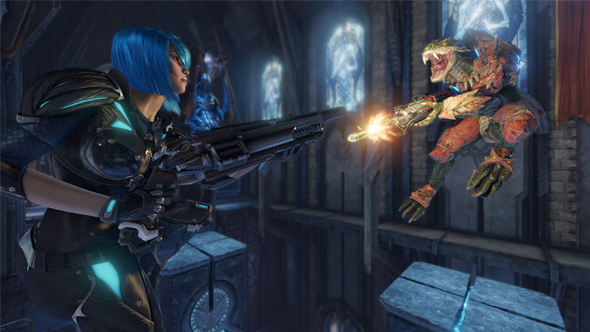 Update August 11, 2017: The Aussie who battled his way through the first round of a US-based Quake tournament, with ping over 200, has qualified for the World Championships.

This ride ain’t over yet. Dandaking, also known as astroboy, also known as horsedoodoo, just qualified for the Quake World Championships, still while playing from down under – at one point his ping peaks at 272.

While Quake is seeing a resurgance in popularity, here’s what we think are the best first-person shooters on PC.

After losing a tense first round to tomservo (with a ping disadvantage of roughly 100), dandaking finally qualified after battling through four roundsin the lower bracket (you’ll note that every other player is based in North America).

His final, fraught match was against Pit. After the Aussie found himself a map and two rounds down – one more loss away from being knocked out, against an opponent who was playing from the very studio hosting the match – he made an astonishing comeback. Here’s a clip, courtesy of Kotaku, of an error by Pit that let dandaking back in the game:

By the final round, dandaking was playing with a ping of 272 and yet still somehow managing to land lightning gun shots. Here’s his reaction to the win (don’t play this through speakers):

Spread the JAM! The moment I qualified for the Quake World Championships @ESLQuake @Quake @jamgamingau pic.twitter.com/pSLOGvzhf1

Having made it through the second round of qualifiers, dandaking is now officially competing in the Quake World Championships at QuakeCon later this year. Best news? He’ll be flown out for that, so will be playing with a decent ping. Be afraid.

Original story July 10, 2017:Quake is a game that demands speed, precision, and nerves that remain unfrayed under pressure. Somehow, Daniel “dandaking” De Sousa, a Quake player based in Australia, managed all three while competing in a US regional qualifier for a $1 million prize pot, all while playing with a ping rate of more than 200+.

The qualifying rounds for the ESL’s Quake Championships are taking place online and there are no rules discounting international players – maybe because no one thought a high-ping player could possibly win – so De Sousa was able to enter from his home in Australia. Naturally, this put him at a disadvantage – all the US players in the 32-man tournament would have little to no lag whereas he had plenty.

Despite this, as Kotaku show in these clips from the feed, just look at how deadly De Sousa was in play:

Having now qualified for the tournament, De Sousa will need to buy flights out to the states or find a sponsor to compete as the next stages will be held offline.

You can watch the full match over on Twitch (De Sousa’s match kicks off at around the ten hour, 30 minute mark). It’s a great watch, even if just for the growing incredulity of the commentators.