Most great sports are a convergence of two stories – two deserving protagonists wrestling for a single available happy ending. The Quake Champions Duel finals last weekend had two absolute humdingers. On one side, youth: the 17-year-old Belarusian Clawz, with the quiff of an X Factor hopeful and dexterity that borders on terrifying. On the other, experience: a Dutch veteran of ‘90s Quake named Vo0, whose comeback has been so sudden and unexpected that his Wikipedia page still reads “former” and “retired.”

In real life, VoO stands at least a foot taller than Clawz. But in-game, he endeavours at all times to present a smaller target – partially concealing himself behind pillars, exposing himself just enough to squeeze off a rocket at the spot he thinks Clawz might occupy in half-a-second’s time. Watch Vo0’s screen and you’ll see that he constantly backtracks and weaves through the map, zipping around his target like a wasp around an apple. In Quake circles, Vo0 has a reputation for reserved, even “passive” play, but it’s all relative: he never once sits still in this twitchiest of twitch shooters. 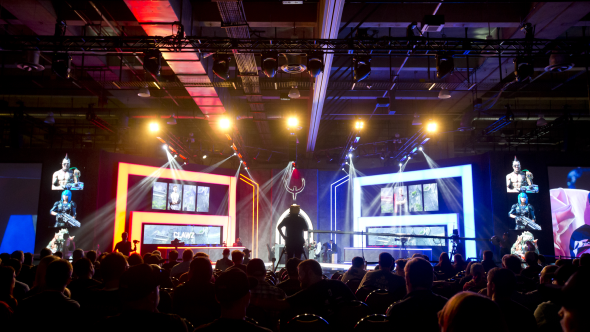 It’s only through this guerilla style of play – by fading into the architecture and popping up for surprise attacks – that Vo0 is able to compete with his new nemesis. Through a combination of confidence and practice, Clawz has developed a mechanical prowess that’s almost unerring. It’s embodied in his use of the lightning gun, or LG as it’s known in the community: a needling beam of pain that’s extraordinarily difficult to make connect with the slim character models in Quake Champions. Several times during the finals, Clawz locks onto Vo0 with the LG and simply doesn’t let him go – as if the weapon were a taser, and he were attached to his target via tiny electrodes. In fact, he’s enacting countless tiny aim adjustments that make the improbable – an 100% hit rate – feel inevitable.

The only thing going through his head in those moments is “full concentration,” Clawz tells us. “Focus.”

The commentators speak often about the Belarusian’s apparent fearlessness – a refusal to be fazed that allows him to go up against the best players from a scene that’s existed almost as long as he’s been alive. 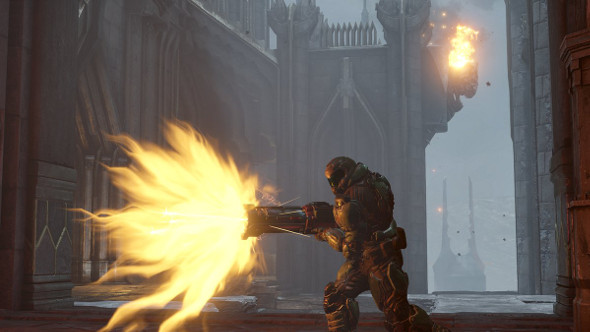 “He was never a star in the old Quake,” id Software esports manager John Hill says. “It didn’t matter. He took what he knew, he learned from the past, and he quickly applied it. I think we’re going to see a lot of that moving forward.”

Clawz has a tic that tends to emerge at the end of a particularly tough round: half-cough, half-exhale, as if he’s exorcising a demon. Is it relief? A sign that Clawz isn’t quite the preternatural master of his emotions he appears to be?

“No, man,” he says. “For the game, I was thinking about keeping my mind calm and that’s it. To be confident, to be calm, and to aim.”

Vo0, by contrast, wears his emotions more openly. He plays with a childhood photo of himself and his mom on his desk – a “good luck charm.” And he’s open about the reservations he harboured ahead of returning to competitive Quake. 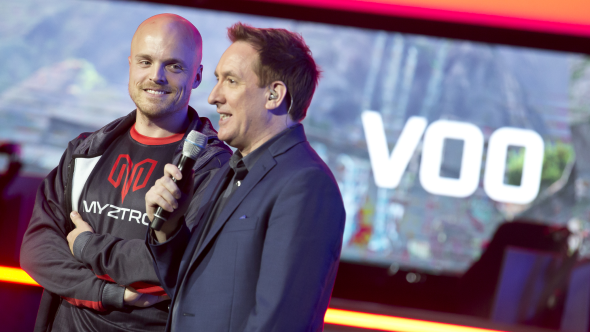 “It’s a lot of stress,” he says. “Because you always want to win. You have to play your best and sacrifice friends, family, hanging out, going to the park, going to bars. I skipped the summer to play Quake.”

Vo0’s return to relevance has been enabled only by a tiny mechanical tweak. His playstyle is reliant on a movement setting from early Quake that sees characters retain their momentum and direction after jumping. It’s a style of movement that had disappeared from tournaments in favour of greater air control – and the decision to fold it back into Champions has reignited Vo0’s career.

“The idea was to bring movement from multiple different Quake games into Quake Champions,” Hill explains. “In PC games, movement has a very high skill ceiling. You can see that with the way Vo0 plays: he’s very fluid, he’s doing things forwards and backwards – stuff like that takes a lot of practice to do.” 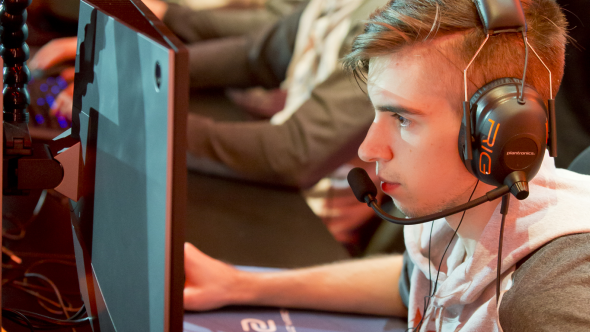 There’s a common belief that esports players reach their prime at some point in their teens or early 20s. As Hill, a former pro himself, puts it: “Reflexes, being young, really helps.” But Vo0’s return to Quake reminds me of a conversation I once had with Team Dignitas manager Odee, who retired from professional play aged 36.

It’s desire,” Odee says. “Do you want to do it or not? I don’t think brain cells tire.”

Vo0 seems to be living proof. He thought his career was long over, having packed in Quake and gone to college. But a few years ago, shortly after graduation, he picked up the FPS Reflex Arena. Within a month and a half he was competitive again, and shortly after that he was cleaning up at every Reflex tournament going.

“I’m 30 years old, and I can still hang with the young kids,” he realised. “QuakeCon always had older players. Age is just a number.” 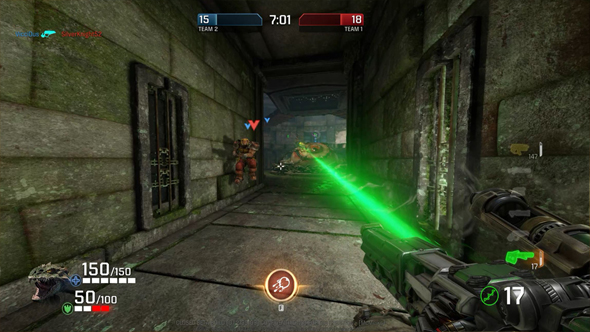 Every single round of the final is hard-fought and incredibly tense – an existential struggle played out across faux-medieval ruins. But the rise of Clawz seems inexorable, and eventually his LG finds Vo0 one too many times. A great from the ‘90s succumbs to the new generation. This is, in fact, Clawz’s second win today – having bested the group competition alongside his team, 2Z. After making a total of $45.16 professionally last year, this teenager is suddenly $175,000 richer.

Vo0, who won his spot in the finals only after another pro dropped out, heads home to celebrate. He resolves to take a week or two off Quake before rethinking his game. Odee would be proud. If Quake Champions is the battleground in which youth finally wrests the baton from the heroes of the ‘90s, they won’t take it without a fight. 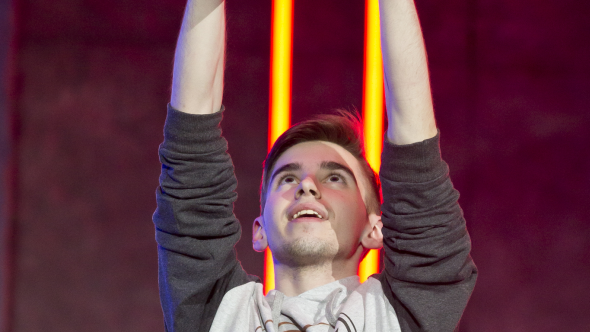 In the hotel and convention centre where QuakeCon is hosted in Grapevine, Texas, the sports bar chose not to show Floyd Mayweather beat Conor McGregor into submission – it’s a family establishment, you see. But it wasn’t a fight anyone seemed sorry to miss. After all: great sport is a convergence of two stories – two deserving protagonists wrestling for a single available happy ending. And great sport is exactly what went on at the Quake World Championship this year.