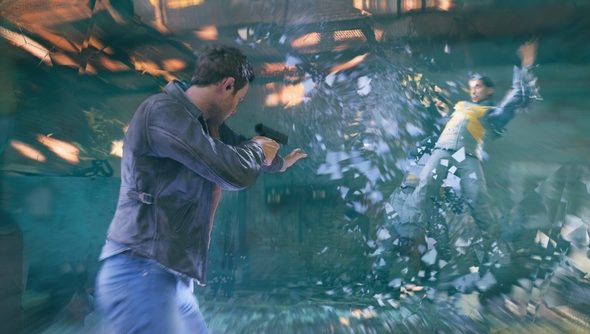 Quantum Break is about dealing with the fallout from a rip in reality, so it makes sense that it feels desperately uneven – a cover shooter that executes some familiar tricks with considerable style, thrust into the spotlight alongside a TV show that, so far, has all the charisma of a bowl of ketchup. Created in part to support Microsoft’s original vision for Xbox One as a place where interactive and non-interactive media would finally meet, hug and swear eternal friendship, the game alternates playable acts starring Shawn Ashmore’s grizzled babyface Jack Joyce with live action episodes featuring his antagonist Paul Serene, played by a dependably baleful Aiden Gillen.

Which of these upcoming PC games will we be talking about and playing for years to come?

Both the hero and villain (or is he, etc) have some control over the flow of time, following a lab experiment gone wrong at the outset. In Serene’s case, he’s already lived and relived the events of Quantum Break multiple times over, and now regards everything and everybody with a mixture of boredom and despair. In all probability, so will you.

Going by its first episode, Quantum Break’s story is so hackneyed it makes the average Tom Clancy yarn resemble an acid dream. I’ll spare you a synopsis, but suffice to say that much of the dialogue takes place in an office or warehouse, there’s a strong-jawed workaholic husband with a puppyish, stay-at-home wife, and the last five minutes is a car chase because that’s what passes for catharsis when you can summarise characters by what they wear. 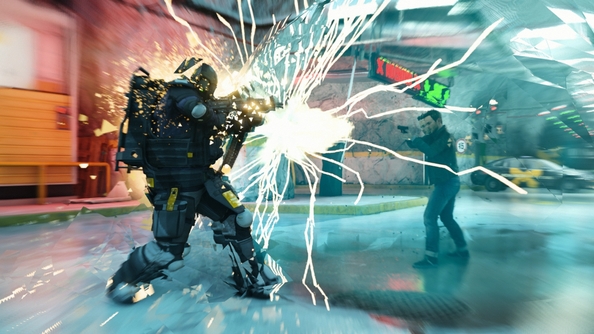 Fortunately, only the shooter part of Quantum Break is mandatory – you can always skip the TV episodes, which in any case must be streamed from a server. But the problem is that each half of the game feeds off the other, in an admittedly bold attempt to allow for narrative choice and consequence within the framework of a by-the-numbers corridor blaster. At the beginning of each live action segment, you’ll get to make decisions from Serene’s perspective that shape both the ensuing episode and what Joyce faces in his levels. On the flipside, you can interact with artefacts while trotting around as Joyce that contextualise and sometimes, directly affect what happens in Serene’s tale.

It’s obviously too early to pass judgement on this Frankenstein’s cocktail of a storyline, but one annoying by-product is that if you want to see everything the live action component has to offer, you’ll need to trawl levels for objects like laptops or whiteboard memos – pulsing Joyce’s obligatory Magic Object-Highlighting Vision as you wander around lushly rendered environments. It’s not exactly emergent storytelling on par with The Stanley Parable.

As a drama, then, Quantum Break may not live up to its billing. It’s just as well that the gunplay, when you’re eventually permitted to get to grips with it, is gorgeous. Joyce’s basic moves as a duellist are those of every unshaven white dude in a short jacket since 2007 – duck behind an object, sight on an exposed limb, repeat till driven from cover by a grenade icon – and the handling is a little sluggish. But that’s made up for by your superpowers and in particular, the ability to stop time in a bubble around a single foe. 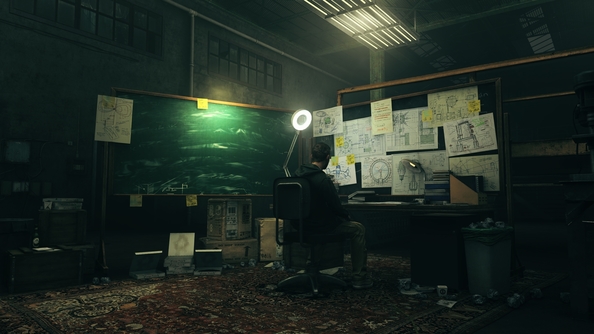 This shuts down incoming fire from that quarter, obviously – you might use it to paralyse an armoured shotgun trooper while you take care of his underlings. But you can also pump bullets into the bubble to queue up damage, piling on the pain till it collapses and the suspended rounds explode forward in a joyous Zerg-rush of sparking metal. As with Gears of War’s Active Reload mechanic, it creates an enticing little loop of challenge and reward inside the rhythms of each battle.

There’s also a dash ability that triggers a brief period of slow-mo, allowing the skilled practitioner to zip out to one side and draw on hastily swivelling foes before they can loose a shot. Should Quantum Break’s line-up of basic enforcers and heavies make too much of a dent on Joyce’s health bar, you can throw up a shield of frozen time directly ahead of you – usefully, it punts nearby hostiles into the air. Finally, you can clench and release the fabric of space to generate a shockwave, in lieu of a traditional grenade option. 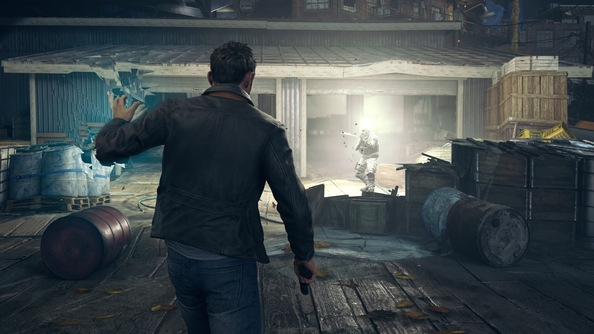 None of these gambits exactly reinvents the wheel the way Max Payne did, but there’s something to be said for a fresh spin on the business of cowering by cars and scuttling down flanks. Sadly, progress and exploration outside combat is dull, despite attempts to sex up pedestrian feats of action-platforming by having you, for example, rewind time to repair a platform, then suspend time so that you can trot across.

This looks impressive, but all you’re doing is interacting with highlighted objects to open a path – it’s functionally indistinguishable from moving a crate by hand. Hopefully, later chapters will offer puzzles that put time travel to more sophisticated use.

Quantum Break is a game I want to love almost because of its flaws, rather than in spite of them. The thrill of treating a rampaging thug to a brusque time-out aside, its rough edges are born of genuine and commendable ambition, and it’s possible that future episodes will knit the pieces into something marvellous. But I suspect that in seeking to make an artistic point of the rift between storytelling and gameplay in action games of this hue, Remedy has only deepened it.