It’s remarkable that we have only had one game based on The Running Man. This 1987 action movie is set in a dystopia during which the US government broadcasts game shows about criminals fighting for their lives, either facing off against each other or professional killers – a perfect fit for a multiplayer game.

Only a handful of titles have embraced a game show aesthetic – Dead Rising 2, Rage, Undertale – but none have shown more promise than the flamboyant and “x-treme” Radical Heights.

Not into Radical Heights? Find out which is the right battle royale game for you.

The newest contender to enter the battle royale fray, Radical Heights is a buggy, unfinished mess that has no right being so fun. With Fortnite and PlayerUnknown’s Battlegrounds dominating the space, it is paramount that developers Boss Key have something unique to offer, a juicy centre inside the battle royale wrapper. That’s where the cheesy, ‘80s game show complete with hosts, fabulous prizes, and even a big wheel to spin comes in. 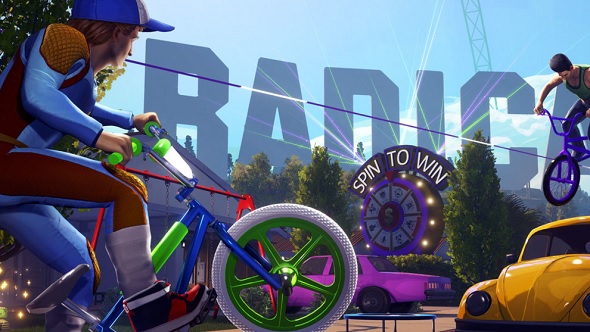 As expected, matches in Radical Heights consist of 100 players randomly landing around the map, finding weapons, and murdering each other until only one is left standing. It’s standard for the genre despite the introduction of a cash system that determines which supplies you can purchase. Radical Heights only starts to feel like a game show, then, once you stumble upon the specific prize events dotted around its map.

These events include BMX races, catching cash raining from the sky, and a giant wheel that randomly offers a piece of high-end loot. There are also large item caches that you have to stand on for a few seconds before they open. Sadly, while these events offer a quick thrill, they’re too infrequent, not impactful enough, and get lost in all the chaos – despite outwardly embracing the game show aesthetic, Boss Key have yet to let this energy fully extend to the game’s mechanics. 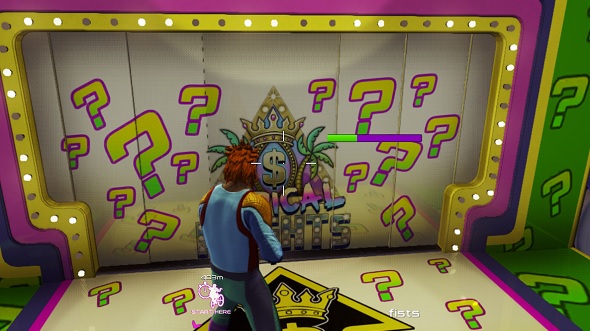 Standing in a spot for a few seconds while a prize box opens lacks the interactivity and excitement we expect from a game show. Why not have these prize boxes test our skills with a pop up shooting gallery or make us answer a trivia question? Indeed, it’s likely that these are ideas Boss Key already have but are in the process of adding to the game, given that it’s so clearly early in development.

If that is the case then it would be great to see them take these mini-games to the… x-treme. Radical Heights has the opportunity to go wild, really shaking up the battle royale formula by letting players bet their lives for the best loot. Would you run through a minefield if it meant getting high-end armour. Or how about entering a grocery store filled with poisonous gas in order to grab a beefy weapon? Boss Key need to add these high risk, high reward options to give their game life after the retro novelty of pink sweatbands and garish Hawaiian shirts wears off. 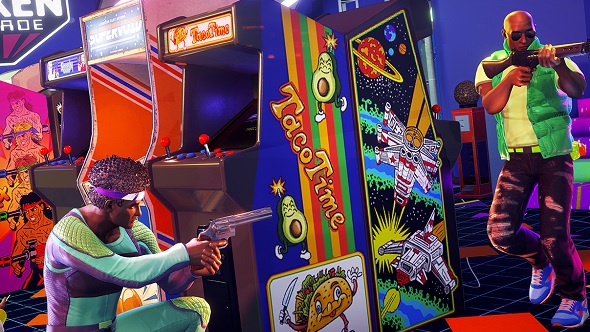 Radical Heights’ announcers are another underused resource. These men introduce every match and make a joke upon your death but this alone doesn’t fully convey the idea of being on a game show. Instead, these hosts should make commentary throughout the entirety of the match, regardless of whether your actions were impressive or not. In fact, if you fail utterly it’s a great opportunity to turn it into comedy. Having the hosts mock you for a missed jump, question your choice of weapon, and cheer on a successful kill would inject more personality into the game. They should be the GLaDOS of battle royale games.

If Radical Heights’ bugs were removed, cosmetic options completed, and general textures added it would still just be a blip on the multiplayer radar. The game’s current build is fun in the moment but is ultimately forgettable. Boss Key should not only look to the likes of The Running Man for inspiration but the loud-mouthed, prize-hungry game shows of the decades they reference.