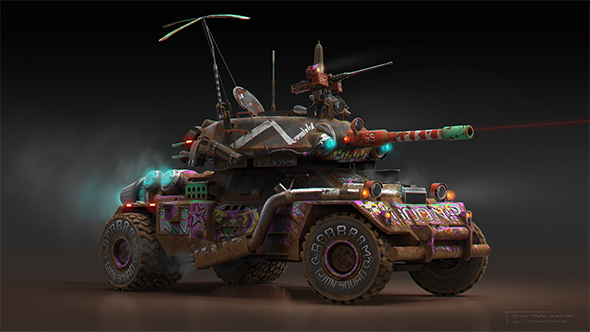 When you work around a game set during an apocalypse all day it’s got to get you thinking: ‘What would I do if the world ended?’.

It sounds like that’s the case with Magnus Nedfors, game director of Rage 2, who when asked by GAME Media what he would do in the apocalypse, said that he “actually built [his] own bug-out vehicle. It was a big four-wheel drive van I had.”

His plan went further than that as he had even picked out his group of survivors: “I [would] grab my best friend and my family, and I knew where to go in Sweden. There was a little exit plan going around.”

There’s a lot going on this week, to keep on top of things be sure to read our comprehensive E3 2018 guide.

Nedfors isn’t alone in hatching a plan for the end times; it’s something a lot of people have done. I know for a fact there is someone in our office who has bought a set of gas masks for his family and a year’s supply of food, should he need to “bug-out.”

With any luck, Nedfors won’t have to use his bug-out van before Rage 2’s release date in spring next year, because the game is looking great and I’d like to spend at least a week driving about its wasteland before having to adopt a new life as a flesh-eating cannibal bandit.

You can watch the full interview below:

How well-prepared is #RAGE2 game director Magnus Nedfors for the apocalypse? Well, he once built his own bug-out vehicle!

Rich recently played through a Rage 2 demo and left impressed:

I’m a huge fan of Avalanche’s games – the Just Cause series grows wilder with each new entry and its take on Mad Max was beautiful. So having the studio collaborate with id on a game which is basically Mad Max with more colour, both figuratively and literally, is excellent news.