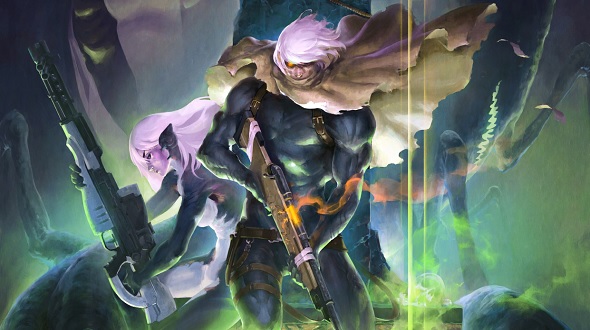 What do you love more? Single-player games with large narrative campaigns? Or 4v1 shooters in which you work with or against your mates? If you can’t decide then here’s the good news: Raiders of the Broken Planet lets you have both.

Developer MercurySteam have, so far, released two campaigns for their episodic action adventure, in which you can play solo or grab up to three friends to join you. The first is Eternal Soldier, which is available as a free-trial prologue, offering two missions to introduce you to the Broken Planet world and the characters within.

The second campaign is Alien Myths which is available at £9.99. However, because we’re generous folks, we are giving away 300 Steam keys for Alien Myths. Before we get to how you can win one, let’s tell you a little bit more about this campaign. In Alien Myths, you can play as the heroes or the antagonist. As the former, your mission is to search for the legendary Protectors, working with your fellow Raiders. But as the bad guy you are out to stop them as best you can.

Now that you’re pumped up and ready to play, it’s time for you to enter our giveaway. All you have to do is use the widget below- we’ll need your email address so we can send you the code upon winning, but we won’t send you spam, we promise.

Your journey through Broken Planet doesn’t have to end with Alien Myths, either, as MercurySteam have now released the third campaign priced at £9.99. It’s called Wardog Fury and has you tracking down Loaht to persuade him to join the Raiders, but it will not be an easy given that the Wardog mercenaries are hunting him down.

On top of that, the ruthless General, who was betrayed by Loaht, takes no prisoners and plans to takeover the Broken Planet himself. Will your team be able to find Loaht alive in time? And will you choose to protect the Broken Planet or infiltrate it with the enemy?