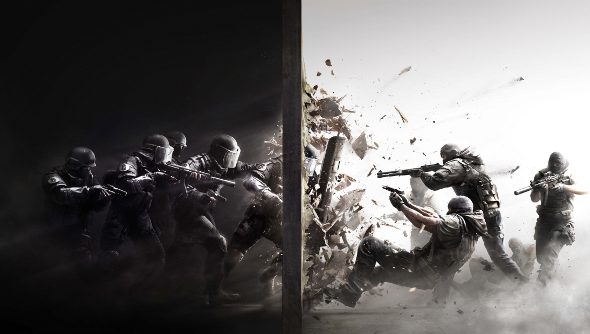 My ears are ringing and every noise I hear is deep and bassy. A dust cloud from a hole in the wall conceals everything in front of me, but as it dissipates there’s a flash of gunfire, then a response from an ally standing next to me. Another explosion, this time from the barricade, heaps chaos on top of chaos. A man starts to sing in French and another swears in English.

The wall-demolishing vandal is dead, but his cohorts pour through a door, stepping on the splinters and wooden planks that were once our barricade. More gunfire, lighting up the room, piercing the smoke, and then… victory. The Frenchman is singing again. Yes, I think to myself, sing it. It was my first Rainbow Six Siege victory, and it felt great.

It’s useless, trying to guess what state a game will be in when the developers say it’s in alpha or beta. I’ve played alphas where the game hardly exists, and betas where the game is nearly indistinguishable from the finished product. In Siege’s case, alpha means very early on, but still completely playable. 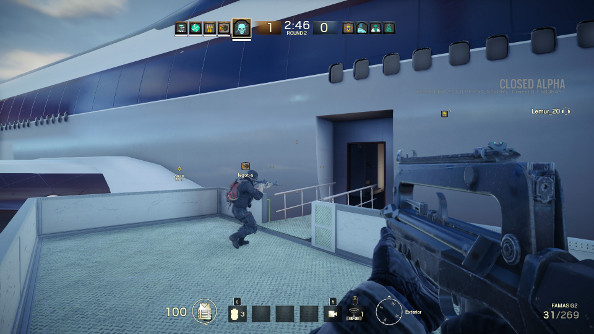 Alpha players can fight across two maps, a large suburban house and a stationary plane, in one mode, Hostage, and you just get flung into matches. With lots of missing textures, wall clipping and barely any settings options, the game feels very rough. And it makes an odd first impression.

I wanted to play with Rob, but that was immediately out. When you select multiplayer, you’re immediately flung into the first available match, with no option to join as a group. Siege will be a game that you’ll want to play with people you know – it’s all about communication and teamwork. But that’s not possible yet. Instead, communication is forced between strangers by an ever-present voice chat feature.

I didn’t realise the voice chat was on until I heard someone answering questions which I was directing to Rob over Skype. Someone in Rob’s game probably didn’t know this either, because when he joined the match, all he could hear was some streamer thanking his subscribers. My first moments in the game were baffling, with different conversations going on with my fellow players chatting away, but not to each other. 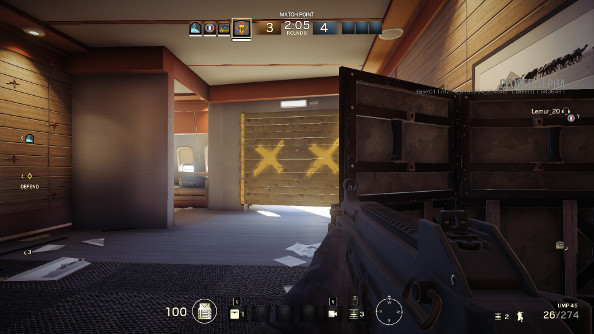 That Ubisoft is showing the game off so early is surprising, and my first impressions were that it was too early. Now I’m less sure about that, because the fundamentals, the game’s bones, are here, and they’re looking good.

Hostage, the only mode available at the moment, pits two slightly asymmetrical teams against each other as they attempt to keep or take the titular prize: a very scared hostage. The defenders can hole up in one of several defensible locations – chosen at the start of the match – while the attackers can choose an entry point and then must locate and rescue the hostage.

Playing either side is a distinct experience. The attackers are infiltrating enemy territory, essentially. They have to carefully pick their route, actually search for the hostage – either at the start, with their adorable remote-controlled cameras, or during the match itself – employing stealth and perfectly timed breaches, sometimes from multiple locations. 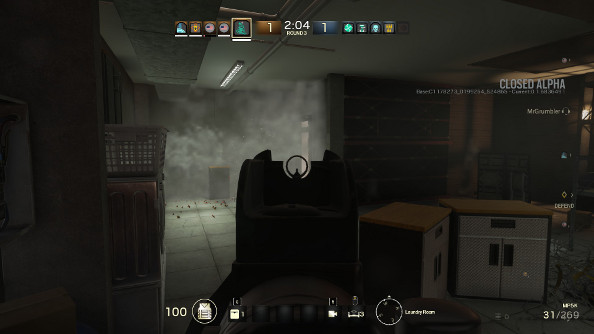 For the defenders, they’re on their home turf. Before the match kicks off, they have time to fortify their position by boarding up windows and doors, setting traps and ambushes in the locations where they hope or expect the enemy to come through.

The tools that attackers and defenders employ are different, too. Different factions have different operatives, Siege’s classes, who have unique abilities, but during the alpha only two are available. There’s still a fair amount of diversity, though. The operatives have different weapons depending on their role, and then special items that define them. One operative, attacking, can lay down devastating breach charges, smashing through walls and floors, turning rooms into wooden splinters and plaster dust; on the defending team, he’s got an opposite, an operative that can plonk down a portable, metal barricade that can be moved and employed by the rest of the team.

Siege is undeniably a tactical game. Death comes swiftly, and when you’re dead, you’re not coming back (you can still watch the match from security cameras, if they haven’t been destroyed, and shout warnings at chums) inspiring carefulness and planning. There’s not a lot of that at the moment, with everyone being new to the game and unwilling to use the voice chat for anything other than singing or letting everyone hear their private conversations. But on the occasions where a team gels, it’s glorious. 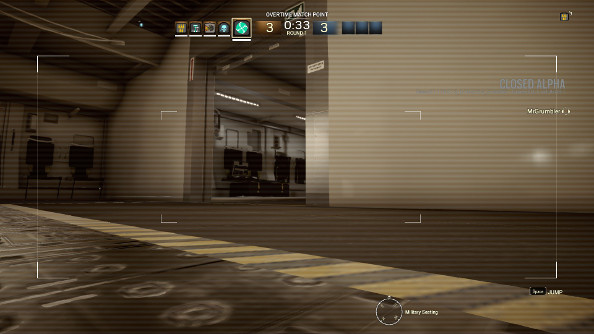 We’re infiltrating a house, searching for a hostage. I’ve been here before and I’ve got a pretty good idea of the layout and each of the places where the hostage could be. Rolling through the home with my wee camera on wheels, I head straight to the closest one: the laundry room. Jackpot!

We head inside, and I make a straight line for the laundry room in the basement via the backdoor. It’s undefended. The door to the laundry room itself, however, is not. It’s been boarded up, and thanks to the unfortunate, aforementioned clipping issue, I know there’s a chap with a rifle right behind it. My operative can tear down these types of barricades, but I’d be full of holes before I was finished. A bit of teamwork is called for.

I move back up the stairs slightly, and then fire, making a head-sized hole in the wood. This is followed by a flashbang flung by an ally. We turn around, it goes off, and the enemy fall over each other. We have enough time to smash the remaining boards and get through the door. At the same time, hearing the ruckus, another member of my team breaches the second door on the other side. Inside, it’s nothing but grey smoke, muzzle flashes, and silhouettes dropping to the ground. 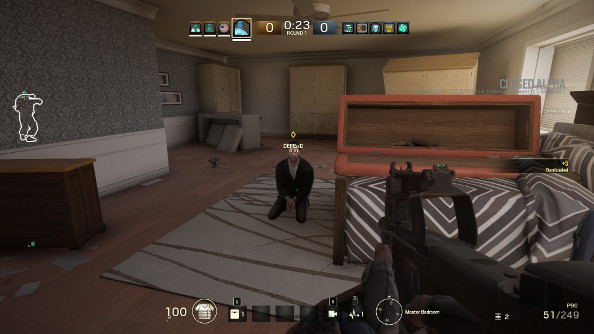 This has all taken a few seconds, and now there’s only one enemy left, crouching behind a stalwart metal barricade. He’s dug in. We can get him, but nobody really wants to die in the attempt right when we’re about to win. There’s a split-second break in the hail of bullets, and then an explosion from above and part of the ceiling ceases to exist. One of my team decides to take the final enemy out from above, dropping down and executing him swiftly.

These fast, intense encounters have been absolutely the best part of the alpha, but they’re not particularly evocative of the rest of the Rainbow Six series. Siege is fast-paced and explosive, where plans are formed on the fly. It’s still methodical, it’s not a game about rushing, but it does demand haste.

Cues, I think, have been taken from the likes of Counter-Strike: Global Offensive, with players being pushed into engaging quicker, and Call of Duty, with its love of spectacle and explosions. Though comparisons between Siege and Call of Duty don’t go much further. 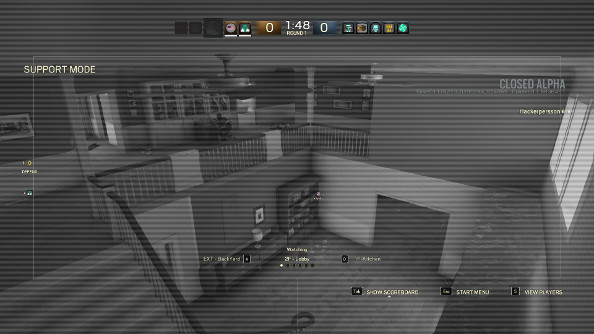 Despite its distance from the rest of the series, Siege could, I think, stand on its own. The destructible environments are genuinely brilliant, entirely changing how you have to look at a map, and the maps themselves are thoughtfully crafted and tactically interesting. The house is full open open spaces and kill zones with an intimidating number of potential paths and entry points, while the plane is a claustrophobic maze of blind corners, dead ends and choke points.

There’s a lot left for Ubisoft Montreal to show off, of course. More maps, modes and factions, a progression system, load outs – all important stuff that we don’t know much about. And with the game still being in alpha, it might be some time till we see big picture.