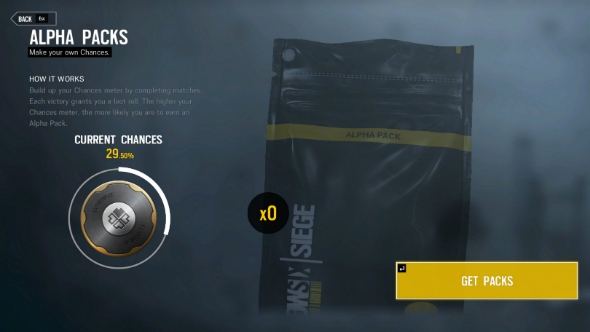 You may have heard just a bit of controversy over microtransactions lately. Battlefront 2 has offered a strong lesson in what not to do, but as season passes start to fall by the wayside – particularly in multiplayer games – it seems smaller purchases will continue to fill in the void to keep AAA games profitable in the long term.

Find out everything we know about Operation White Noise.

Rainbow Six Siege has been particularly successful when it comes to long-term support, leaving behind an unremarkable launch to be one of the most consistently popular shooters on the market, and that’s partly been possible because of microtransactions.

We asked Rainbow Six Siege brand director Alexandre Remy if – looking at the Battlefront 2 loot box controversy – he was happy with the way microtransactions and alpha packs have been handled in his game. “Overall I think, yes,” says Remy, “there is a little bit of pride for the philosophy of the monetisation and the grinding in Rainbow Six Siege.

“We feel we have hit, we hope, the right balance between serving the people who are most eager to get the content right now at a decent price, and at the same time, for those who do not want to spend that money, grinding is here and accessible without having to put in way too much time. So I hope that there is no sensation and perception of a massive pay wall. In that matter, we feel by the feedback we are getting that Rainbow Six Siege is doing [microtransactions] the right way, so it is satisfactory.”

There’s a reason why microtransactions have become such an integral part of modern games, as they’ve offered a way for multiplayer games to enjoy continued support and development without splitting the userbase among map packs and other forms of DLC.