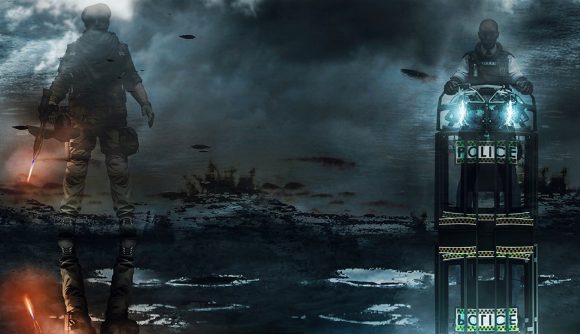 Ubisoft has revealed the first concrete details on Rainbow Six Siege year 3 season 3, officially known as Operation Grim Sky. The operation will bring two new operators and a Hereford Base rework. We already knew that much, but now we know a bit more about the new ops – including what their gadgets will be.

Both operators are as yet unnamed, but one is a female British defender equipped with a shield in the teaser image, described as a “police officer who’s an expert on mob behavior and snatch-squad tactics.” The other is a male American attacker who’s “legendary for his surgical precision” and boasts a blowtorch in the teaser.

The announcement also briefly touches on the Hereford Base rework, which will have a “high chance of rain” – basically confirming the weather effects we expected after yesterday’s tease. Ubisoft says that the renovations will see it “making many adjustments to raise the bar for competitive play.”

We’ll see a full reveal for Operation Grim Sky during the Six Major in Paris, scheduled to run August 17-19. Proper gameplay will likely be showcased for the first time there, though if Ubisoft follows its previous patterns, we can expect a drip feed of new details in the week-and-a-half leading up to the event.

Some smaller scale “gameplay enhancements” are also coming alongside the new Operation, with a weapon sight misalignment fix set to finally come out of testing at Grim Sky’s launch. Get familiar with the best Rainbow Six Siege operators while you can – we’re about to see some big shifts in what to expect.