More details have been announced for Rainbow Six Siege’s upcoming Theme Park map. In a blog post, Ubisoft reveal that the map, which is part of the new Blood Orchid update, will be “an abandoned theme park on the shores of Hong Kong.”

Karine Letourneau, art director on Rainbow Six Siege, says that Theme Park was inspired by the fact that Hong Kong’s “Special Duties Unit is famous for being able to operate in [the city’s] diverse and challenging urban environment.”

The blog post goes on to say that the designers attempted to capture the eclectic landscape of Hong Kong in the new level. The rusted metal of the abandoned Theme Park is overgrown with grass and vines, and construction sites share the horizon with the mountainous regions near the city.

The game area itself is intentionally confusing. Rainbow Six Siege’s production manager Frédérique Rousse says “since the spaces have been reconfigured by squatters and an overgrown nature, the architecture is often misleading. You will find wildly different patterns packed in the same corner, for example, rather than a smooth succession of colors and shapes.”

The Rainbow Six Siege Blood Orchid update, which contains the new map, and three new operators, arrives on August 29. You can read more about the new map through Ubisoft’s blog.

Ubisoft have teased the new Hong Kong ‘Theme Park’ map in a video released today. The video shows off the building at the centre of the park in some detail.

The video shows off the interior of the building at the centre of the Theme Park that’s likely to be where the majority of the map’s action takes place. As well as demonstrating some destructible walls, the video points towards a lot of the map’s spookier areas, with a lot of scary statues hidden in the shadows around the level. You can check out the video below.

Update, August 11:Ubisoft have announced the next update to Rainbow Six Siege will release after the Year 2 Season 2 Pro League Finals at Gamescom.

The Year two Season three update, which is called Operation Blood Orchid, will be available from August 29 on PC, Xbox One, and PS4.

Ubisoft say that “after a focus on improving the game’s health for the past three months, this content update introduces both a free new map and three brand new operators.” One of the new operators is Polish, from the GROM counter-terrorism unit, and the other two will be from the Hong Kong Special Duties Unit. The update will also introduce several new customisation items.

You can snatch a quick look at the new GROM operative, as well as some more Operation Blood Orchid content, in this Gamescom trailer from Ubisoft.

Operation Blood Orchid’s new operators will be available August 29 for season pass holders, and September 5 for all other players. The new map, which you can read more about below, will be set in Hong Kong and named Theme Park. It was accidentally released by Ubisoft this week, but was quickly taken down from the tactical board section of the Rainbow Six Siege website.

The Operation Blood Orchid update will come after the Rainbow Six Siege Pro League finals, which will take place at Gamescom next week, on August 25-26. Eight teams from Europe, North America, and South America will be taking part to win their share of a $237,500 prize pool.

Original story, August 11:A new map for Rainbow Six Siege, based in Hong Kong, has been leaked by Ubisoft. It was first teased in atweetby the game’s official account, but was then accidentally released on the game’s onlinetactical boardon August 9.

The new map is rumoured to be called Theme Park, and the text in the tweeted image translates to ‘amusement park’ in Chinese, which seems to confirm the name and the Hong Kong location. The large setting is likely to be loosely based on the Ocean Park water park, which is just south of Hong Kong, and is the largest amusement park in the city. 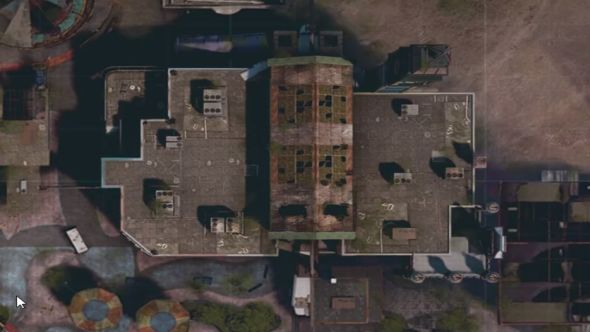 The action takes place in a large building towards the centre of Theme Park. Unlike in Favela, the building seems to have no external breachable walls, although there are plenty of access points on the map’s lower levels. There are three floors, with the second and third floors providing more points of vulnerability, and potentially some sort of basement. You can check out a detailed breakdown in this video. Theme Park is now no longer available via the tactical board.

The map will be part of the Operation Blood Orchid update, which will release on August 29, marking the end of the current competitive season. Launching alongside it will be anew Polish operatorand two operators from the Hong Kong Special Duties Unit.