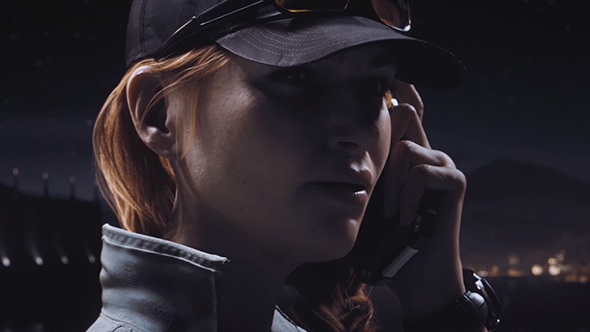 A second trailer for Rainbow Six Siege’s Outbreak event has just been published. After Ash was forced to call in reinforcements in the first trailer, he gets a full briefing on the extent of the damage.

Check out everything we know about Rainbow Six Siege Outbreak.

In the trailer, Ash discusses the possibility of simply nuking Truth or Consequences, the town that Outbreak is set in, but it’s clear that’s intended as a last resort. Ash says that the monsters are adapting quickly, and also happens to tease the new Biohazard operators arriving with Operation Chimera.

In the version of the trailer uploaded to Ubisoft Russia, however, there’s a extra scene – Ash is speaking to Doc via video link, and on the screen in front of her is a severed arm. Doc says “the coral reinforces bones, grows like a carapace of armor on the skin. In other words, it makes monsters.” The video is still in English (with Russian subtitles) but it’s not clear why the US version of the trailer is missing the scene.

The first full reveal of Outbreak will take place at the Rainbow Six Invitational.

Original story, February 5:We’re closing in on both the full reveal of Rainbow Six Siege’s Outbreak event at the Six Invitational, and the proper launch of the event alongsideOperation Chimerain March. To stoke the flames of anticipation, Ubisoft have provided a very coolnew trailerhighlighting the event.

It opens with a bunch of soldiers struggling to fight back against monstrous enemies in the shadows, efficiently getting picked off by the unseen threats one-by-one. Quick cut to operator Ash calling in reinforcements – teasing the introduction of the biohazard specialists that will be coming as part of Chimera, particularly the new Russian operator.

The full reveal of Outbreak is scheduled for February 18 at the Siege Invitational, with the event itself set to run from March 6 to April 3. The pre-release hype for the event hasn’t gone entirely smoothly, though, with some players concerned about changes to the game’s pricing structure – which Ubisoft have partially backpedaled on – as well as the addition of cosmetic loot boxes.