The Razer Naga Infinity has managed the impressive feat of being both an incredibly comfortable, accessible MMO mouse, as well as being a gaming rodent you can use for any other genre too.  And use without ever wanting to swing it by the tail and dashing it against the wall for being so damn button-y. What voodoo is this?!

Check out our pick of the best mmo gaming mice on the market today.

Creating a gaming mouse purely designed for MMO, and latterly nascent MOBA, players was a smart idea, and the Razer Naga has long been synonymous with many-buttoned rodents since it was launched almost a decade ago. But while having more buttons than you have digits arrayed around your thumb is great for some games, for other it just gets in the way. TheRazer Naga Trinity, however, has solved that problem.

The most familiar Razer Naga design features 12 buttons in the same position as the now-traditional back/forwards buttons usually sit. When you’re trying to nail all your buffs, spells, and whatever else those MMO folk like to do, all those extra buttons allow you glide through your virtual world with your thumb a blur of positive action.

But outside of it you’ll quickly find your thumb bashing against an errant button when you don’t mean to, accidentally sending a string of numbers and modifiers over email or whatever chat messenger you happen to be rocking at the time.

And that is incredibly frustrating. If you’re a hardcore MMO/MOBA player then chances are that you’ll suck it up and keep faith with your faithful 12 button rodent. But other companies have been seeking to solve the problem of wild thumb strikes by taking the radical step of not having so many buttons.

The SteelSeries Rival 500 is a smart option, leaving only five buttons by your chunkiest digit while adding more either side of the main left and right mouse buttons. They call the 12-button grid ‘antiquated’ and claim they’re rethinking the thumb. And, until now, that made it our favourite MMO/MOBA mouse.

Roccat’s Nyth also made a good stab at it, offering different covers for the 12-button grid which meant you could limit the number available at any one time. 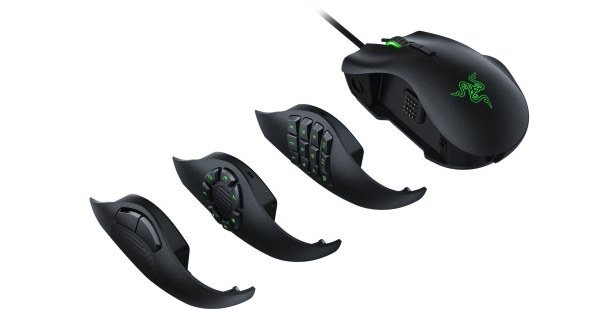 But Razer’s excellent $99 (£100) Naga Trinity goes another step further. It still offers the same clean design around the rest of the mouse chassis, to rest a weary paw atop, but gives you more options around the thumb. You can, of course, stick to the tried and tested (and potentially incredibly annoying) 12-button array, but Razer have created instantly hot-swappable sides for the Naga Trinity allowing you to pull the entire side panel off and replace it in an instant.

It’s magnetically attached with a set of 16 contact points on the removable panel and 16 corresponding pins on the inside of the chassis itself. The Naga Trinity comes with three different panels, the Naga-standard 12-button panel, a traditional two-button (forward/back) design, and a seven-button setup in a wheel formation as a halfway house in between the other two.

It does obviously work with Razer’s Chroma lighting, so you can have your rodent lit up how you so wish, it uses Razer’s own mechanical switches and has the now-classic 16,000 dpi optical sensor that we’ve come to expect from practically all gaming mice around right now. It is, of course, denoted as Razer’s own, but we’d bet that it’s only a very slighty tweaked version of an existing sensor.

This all makes the Naga Trinity an incredibly versatile gaming mouse. It’s no longer just an MMO/MOBA mouse, it’s usable for anything you do with your PC and capable of making that switch in an instant.

It’s swift, accurate, and pleasingly comfortable too. The chunky, wide-boy design is probably most suited to a palm grip, but even as a dyed-in-the-wool claw grip gamer I found it well balanced and still suited my play style.

I’m a massive fan of the new Naga, which is quite something considering I’ve never been particularly fond of them in the past. But the Trinity design has made it almost impossible not to love.