Choosing the perfect gaming keyboard can be a tricky task due to the sheer amount of options available these days. Do you go the custom route and spend hours creating your own board, or do you save yourself the hassle and opt for something off the shelf instead? For the people that don’t want to put any work in, the Razer BlackWidow V3 Mini HyperSpeed offers a feature complete keyboard that also leaves the door open for future customisation.

This is Razer’s first attempt at a 65% keyboard, and it’s done a fantastic job packing essential features into a board this small. The standout aspect of the V3 Mini is Razer’s HyperSpeed wireless technology, which runs on 2.4Ghz to eliminate as much lag as possible. There’s also the ability to switch to regular old Bluetooth in case you have another device you want to connect to, which is always nice to have as a secondary option.

I’ve tried to use Bluetooth keyboards in the past, but the typing experience has never been consistent enough for me. The odd delay here and there is fine for a workplace environment, but that type of lag can get you killed in games. Thankfully, these problems never occur when using the 2.4 Ghz connection. You also have the caveman option of using the V3 Mini wired with the included USB Type C cable, if you fancy trying to manage cables.

If you own any other supported HyperSpeed products, you’ll be pleased to know the V3 Mini can pair to your computer using the same dongle as your other peripherals. The V3 Mini also supports Razer Chroma RGB, which you can drastically improve using the Razer Synapse 3 software – more on this later.

It’s worth mentioning that it takes just over four hours to fully charge the keyboard. Running any form of backlighting while using this keyboard wirelessly feels counterproductive. I use this keyboard cordless (in 2.4GHz mode) with the static white effect and only managed to get through one work day before the battery notification popped up. 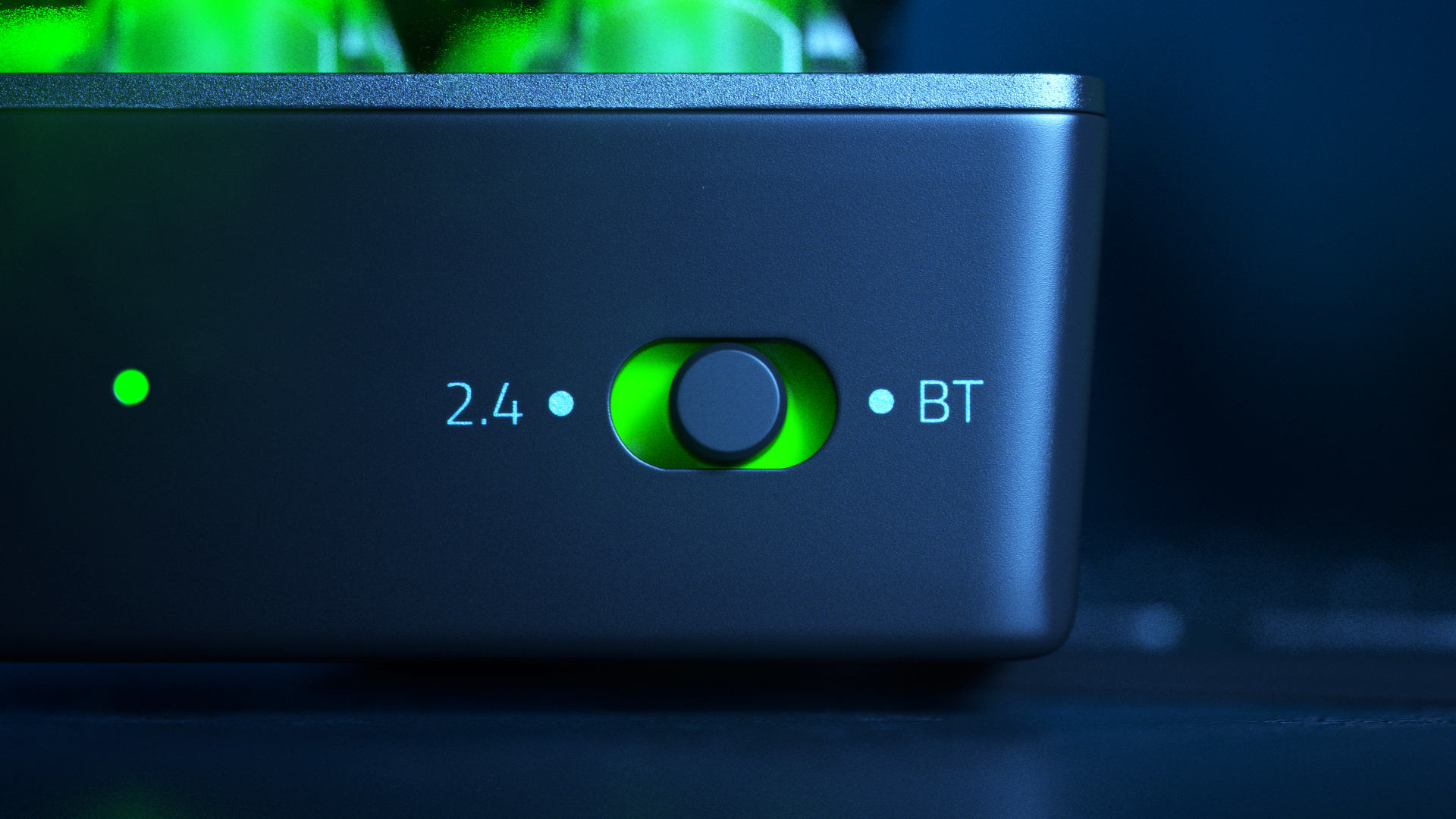 To test Razer’s claims of the V3 Mini sporting a 200 hour battery life, I created an RGB-less profile to see how long the juice would last. This profile easily got through the entire week with power to spare, though it came at the cost of the keyboard’s standout feature.

There’s definitely room to strike the perfect balance between the battery life and RGB. You don’t need to run the brightness setting at 100% all of the time, and there are plenty of power-saving options you can enable to conserve some battery life. That said, the backlight needs to be on at least 30% if you want to be able to read these keycaps during the day. While Razer’s stock keycaps on the V3 Mini are designed to let the RGB lighting shine through; it’s very difficult to read each key unless you have the backlight on. Razer’s new Phantom keycaps might fare better as the snakeheaded version of pudding caps, but I didn’t test these.

If you’d rather swap the keycaps for something a little less traditional, the V3 Mini is compatible with the most popular keycaps. The bottom row of keys isn’t standard, specifically the alt, function, and control keys on the right side, however, this is common for a lot of 65% boards. 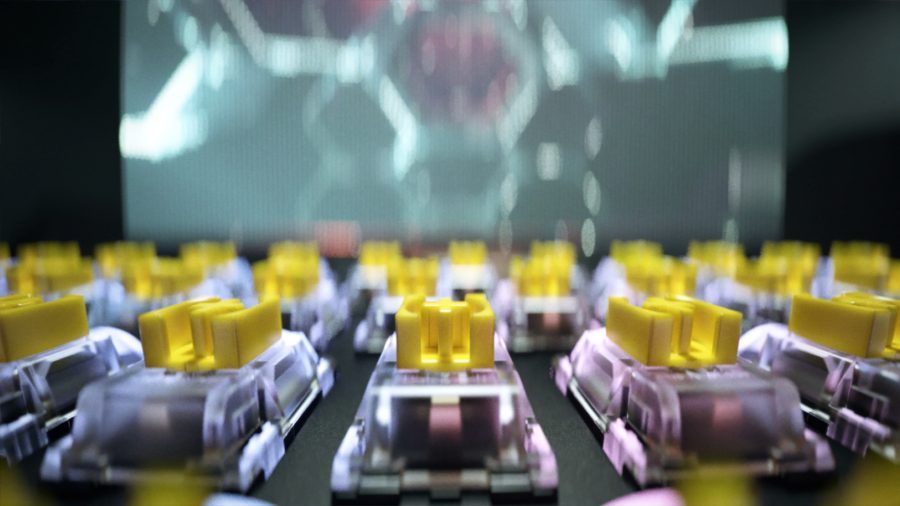 The V3 Mini comes in two distinct Razer switch varieties: greens and yellows. Razer’s green switches are tactile and clicky, whereas its yellow switches are linear and silent. Compared to any keyboard I’ve ever used, the yellow switch version of the V3 Mini was difficult to adjust to within the first week of use. I’ve tried several types of switches in the past, but this is the only keyboard where I found myself accidentally pressing down keys in a resting position.

The Razer yellow switch feels noticeably sensitive with its low 45G actuation force and 3.5mm travel distance. This was annoying to deal with at first, but once I got past the initial learning curve, I found this switch to be amazing for both typing and gaming. Razer recommends its yellow switches for gaming, but I’ve recorded some of my highest words per minute in typing tests using this switch. It feels great and has a dampened sound, yet this doesn’t make the keyboard feel spongy.

Razer Synapse 3 is a divisive piece of software with a history of hiccups. Personally, I’ve had problems ranging from crashes when plugging in different Razer hardware, all the way to the software refusing to boot up unless I reinstall it. With all that out of the way, when it works, it’s actually really good. The Chroma Studio in particular allows you to customise the RGB on your devices exactly the way you want them. 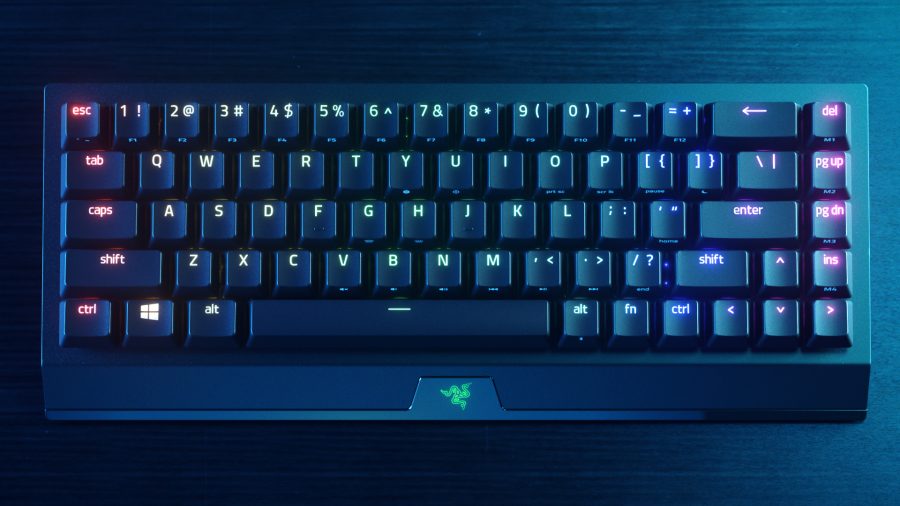 Synapse also contains the Hypershift feature, giving you the ability to redefine several keys when holding down the function key. This can be used to launch programs, set up shortcuts, and even switch profiles. I have profiles for wired and wireless use that are stored in the keyboard’s on-board memory, forgoing the need for Synapse entirely. If you want to get the full use out of the V3 Mini, it’s worth sticking with the software as it’s usually painless.

The V3 Mini comes in at $179.99 / £179.99, which is a premium price for a gaming keyboard, but it’s hard to argue the high-end wireless functionality isn’t worth the cost. If you don’t care about the 65% form factor or the wireless capabilities, Razer sells the near identical BlackWidow V3 Tenkeyless for almost half the price of the V3 Mini HyperSpeed.

The BlackWidow V3 Mini HyperSpeed is a feature-packed compact keyboard at a high price. While there are cheaper alternatives on the market, you won’t find anything as complete as the V3 Mini at this size.