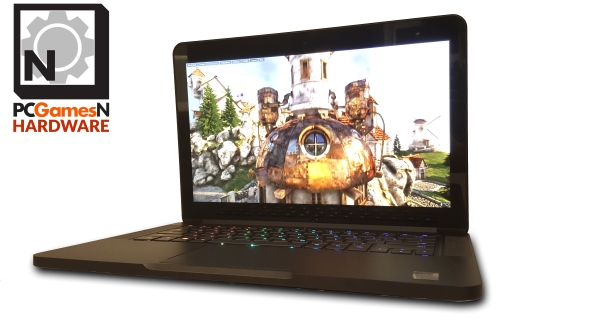 Update December 2, 2016: It turns out Razer had an issue with the initial US versions of the Nvidia 10-series powered Razer Blades. The first batch of laptops seem to have had a GPU throttling issue which meant their performance was lower than they really should be. That explains why our initial benchmark numbers are so much lower than the equivalently-specced Gigabyte laptop.

Razer issued an EC fix(essentially a firmware update) on Monday and that has given our review machine a much-needed performance boost. We’ve also now tested an FHD UK version of the Blade, which didn’t need the EC fix, and they both get pretty much identical benchmark numbers.

However neither manage to deliver the same gaming speeds as the Gigabyte P55W v6 even with the fix, so you are still not getting the same performance that the chunkier chassis seems to afford. But that said it’s only by a handful of frames per second and that’s probably a trade off I’d be happy with given just how sexy the Blade’s design is.

Sadly the battery life isn’t improved by the fix. We actually only got 54mins out of it running the Heaven benchmark on loop.

While the performance has improved that was not really our major issue with the original machine, which is why our score remains the same. It still needs to be almost permanently tethered to a plug socket if you want to do any serious gaming on the Blade, which is a shame given the ultraportable nature of its overall design. And no matter how many hotfixes you apply to your Blade there’s no getting away from the sky-high price tag.

Original review, November 22, 2016: Razer’s Blade laptop is a gaming machine with a specs list you’d happily have in your desktop PC, and yet it comes in Mac-a-like aluminium chassis. What gives?

Gaming laptops are traditionally fugly-looking things. They’re all chunky chassis, overly-aggressive, angular styling and come with more vents than the Nostromo. Which is a result of their function – jamming in the sort of high-grade components you need to make with the gaming pretties means you need serious cooling and that means bulky ol’ gaming laptops, right?

And yet here is this 14-inch Razer Blade laptop with a GTX 1060 graphics card, an eight-threaded Core i7 CPU and a decidedly Ultrabook aesthetic.

Check out the quick links below to go straight to the different sections. 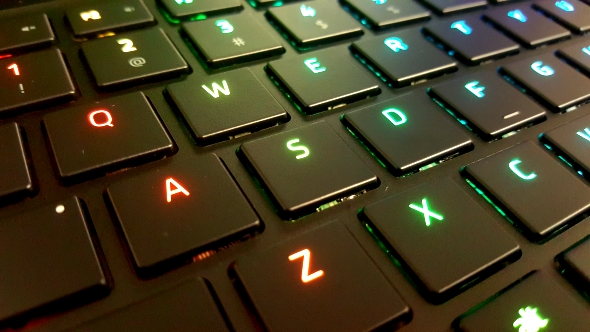 The Blade’s specs list is generally the thing that has people’s jaws scraping on the dirt the moment you tell them what’s in the sleek, diminutive notebook in their hands. Well, that and the exorbitant price tag. You’re getting some serious componentry in Razer’s neat li’l package, but you’re paying top dollar for it too. The spec I’ve been testing comes in at $2,300 (£2,250) and that’s not even the top spec of the Blade either. Yeah, ouch.

It’s very clear where Razer took their design cues from when creating the Blade’s chassis. It is, to all intents and purposes, a black MacBook Pro for gamers, with Windows installed on it. But that’s by no means a bad thing – it really is a lovely little thing. It’s remarkably understated in its design, especially when compared with pretty much any other gaming notebook out there. But Razer have definitely overpriced it in line with Apple’s money-grabbing ways too.

When we’re talking about gaming it’s the mix of CPU and GPU we care most about and the pairing of Intel Core i7 6700HQ and Nvidia GTX 1060 makes for a potent combination. Drop 16GB of DDR4 memory into the equation with a 512GB Samsung SSD and it’s all looking rather tasty.

In fact it looks downright gorgeous, but that’s mostly because of the stunning screen that comes with this high-end version of the Blade. At the 3200 x 1800 native resolution of the 14-inch IGZO IPS panel the imagery and colour reproduction is simply fantastic. Until you start smearing your greasy fingers across the screen anyways. A capacitive touch panel on a gaming laptop feels kinda gimmicky in the extreme and is just going to muddy the glossy display.

As it’s a Razer product the Synapse software is inevitably in attendance; allowing you to paint an RGB LED rainbow across your keyboard. To be honest it’s probably more of gimmicky than the touchscreen, and was the first thing to be changed when I was testing. With a clean white, static LED it’s much more acceptable to be seen out in public with. 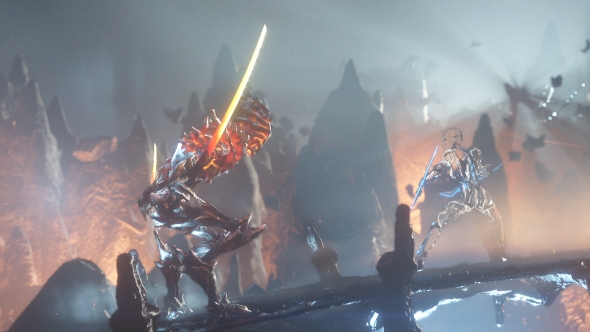 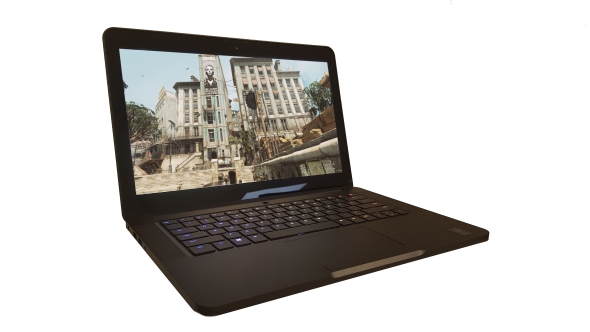 It may be quite a looker, but when we’re talking gaming it’s frame rate performance we’re interested in and this is where things aren’t quite so rosy for the Blade. It’s inevitable really, the GTX 1060 at the Razer’s heart was never going to be able to fully stretch its GPU legs within the tight, thermally-controlled confines of that svelte all-aluminium unibody chassis. There’s a typo on the Razer website which states the case is made of aluminum, but that’s as real an element as unobtainum is to unobtainium.

When compared with the latest Gigabyte P55W, with its identical GPU/CPU combination, the drawbacks of the Blade’s thermal design quickly become apparent. In 3DMark’s Fire Strike and Unigine’s Heaven benchmarks the Blade is 14-15% down, but with Rise of the Tomb Raider, Total War: Attila and GTA V it’s 20-30% slower.

The GTX 1060 in the Razer Blade was bouncing between 1,200MHz and 1,400MHz when gaming, while the Gigabyte machine resolutely stuck around the 1,600MHz mark. Though both were just as blowy as each other when really stressing the graphics silicon.

The performance is still most definitely not bad, but you’re sacrificing a lot of gaming prowess for that sleek chassis and that’s something you do need to be aware of. At full 1080p settings you’ll get near 60fps performance from most games, though the system hog that is Total War is always going to haul those figures down.

And running that 3200 x 1800 screen at a non-native resolution doesn’t actually lead to as muddy an image as you might get on a screen size larger than 14-inch. At that scale the pixel pitch is so tiny that running at 1920 x 1080 on a high-res panel doesn’t make me wretch. Which is a good job because I put our test suite through the Razer Blade at its native resolution and the results don’t make for pretty reading. Only GTA V actually makes it beyond 30fps and that’s a deal-breaker for me.

As is the battery life. On the desktop app-focused PCMark battery test it manages a pretty lacklustre 2hrs 23mins, but when you push gaming loads through it, even with Nvidia’s battery-saving tech doing its thing, it could only manage an hour before it packed in. Actually that’s being generous; it really only made it to 59 minutes. 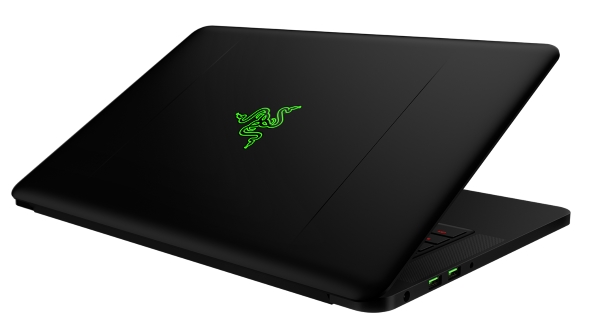 The Razer Blade is a laptop dichotomy – a machine that wants to be both an Ultrabook as well as a gaming laptop. While it has some success as the latter, form factor aside, it utterly fails as the former.

The performance comparison between the Razer and Gigabyte laptops may lead to you immediately discounting the Blade, but they’re machines almost built for entirely different audiences. The Gigabyte is for the performance-at-all-costs crew, while the Blade represents a willing sacrifice of gaming prowess to a slimline aesthetic you wouldn’t mind taking to a coffeeshop. Thanks to Nvidia’s latest GPUs though the sleek Razer, even thermally-limited as it is, can still beat gaming frame rates as the GTX 970M of the last generation. The Blade is most definitely a style-over-substance machine yet still manages to retain some gaming chops.

More of an issue than the understandably lower frame rates though is the battery life and that sky-high price tag. Only just being able to nail two and a half hours of lightweight operation is pretty abysmal for a laptop with Ultrabook pretensions. And an hour of gaming? Well, that’s kinda par for the course for a gaming notebook, but still pretty underwhelming.

At $2,300 (£2,350) the high-res Blade variant is a ludicrous amount of money. The 1080p version makes a little more sense; the screen won’t be quite as be-still-my-beating-heart gorgeous, but it does bring the price below two grand. And when that similarly-specced Gigabyte laptop is out-performing it for $1,350 (£1,350) the price certainly does need to come down.

I am therefore a little torn by the Razer Blade. It’s a gorgeous little thing, with a simply stunning-looking screen and an impressive specs list, but if you were hoping for all-day gaming in line with its Ultrabook styling you’d be sorely disappointed with your expensive purchase. In the end then it’s still a gaming laptop and that means a complete reliance on tethered power and blowy cooling, just with a nicer chassis.