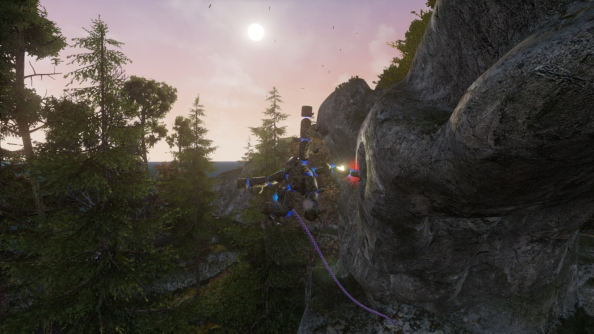 Going outside? Pfft, we shunned that when we became PC gamers. Regular sleepers merely adopted the dark; we were born it, compelled by screen glare to close the curtains the very first time we booted up Thief II.

Except that sometimes, on a rainy day, there’s nothing quite like an outdoors simulator.

Some of the best sandbox games on PC double as fine physics playgrounds.

“It feels like you’re playing with real stuff outside,” says Spintires fan and R.C. Bot Inc. lead developer Stefan Menzel. “That’s what I wanted to replicate and push a little bit farther, and that’s the motivation behind [R.C. Bot Inc.]. You play and after a while, because it’s all physics-based, you feel like you’re actually playing with real stuff outside.”

Menzel’s enthusiasm for the not-indoors is understandable. Injured in a snowboarding accident a couple of years ago, he was left unable to walk more than short distances. The game that became R.C. Bot Inc. was initially conceived as a physical therapy tool. 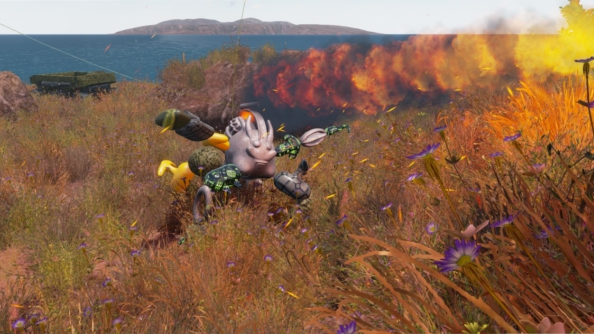 The plan was that a user would stand on a balance board in front of a Kinect camera and watch an Nvidia PhysX-enabled figure on-screen – able to monitor their own movements and practice their balance in a virtual environment.

“That was the idea,” recalls Menzel. “It’s just terribly difficult, so after a while I threw in the towel.”

R.C. Bot Inc. instead puts you in control of a wobbly vehicle in a reactive world – built in Unreal Engine 4, where PhysX is “integrated really well”. You’re not abusing the full-size heavy machinery of Spintires, however. Essentially, you’re handed a complicated toy and asked to relive the first flight of an expensive birthday present – the sort that ends five minutes later with a poorly piloted drone drifting beyond the treeline.

Players direct a many-limbed ‘recovery bot’ not unlike BigDog, the self-righting mechanical being from Boston that set the internet alight. Each of the R.C. Bot’s limbs are controlled independently, and affected by all the natural forces involved in real-life motion. Thrusters can help keep him upright and, when upgraded, airborne – but his solar-powered battery will drain without regular exposure to the light. Prolonged experimentation beneath tree canopies is therefore not advised, and nor is falling from great heights, thanks to some unforgiving damage modelling. Getting about doesn’t get any easier with fewer legs. 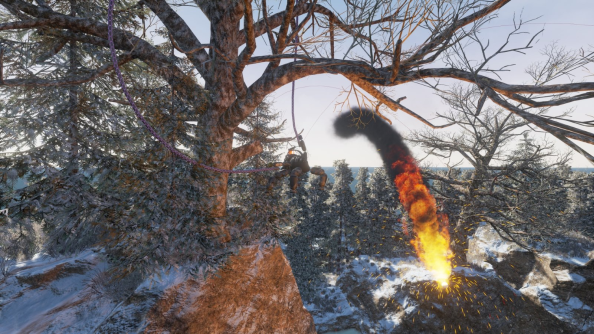 Taking its pointers from Nintendo’s navigational classic Pilotwings, R.C. Bot Inc. has you collecting targets while driving, flying, and swinging about the place, before landing carefully on a recovery platform. Other modes involve shooting or catching a target, which pulls about erratically once you’ve got hold of it – a recipe for “huge chaos”, according to Menzel.

There are plans, too, for planes and quadcopters – the R.C. Bot team are in touch with local remote control enthusiasts for advice – and remakes of Pilotwings’ original levels. The game’s island landscapes range from forest through to African Redlands and space training facilities, “where up can be down”.

You’ll succeed only by treating your immediate environment as a web of all-too-tactile hazards that might knock you off course. Every branch on every tree is a potential threat to your carefully-guided trajectory.

“When you touch a rock wall [in most games], nothing really happens unless it’s scripted,” says Menzel. “When you touch a wall in R.C. Bot Inc. you will bounce off it and fall down. It gives you a different feeling, and after a while you feel like you’re playing with real stuff.” 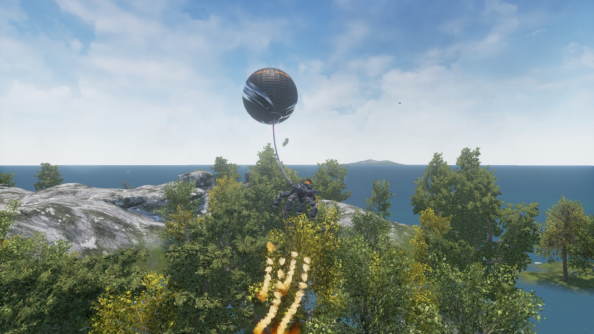 Menzel has some theories as to why developers often don’t make the most of the huge natural worlds they create.

“The outdoors is usually more difficult,” he explains. “It’s usually render-heavy, so you need good graphic cards and so on. The optimisation is really critical.”

But Menzel’s team have been rewarded for their efforts. Although by his own acknowledgement R.C. Bots Inc. is “a bit tech demo right now”, it was Steam Greenlit in 11 days and is now set for a summer release. All the fun and foliage of the sunniest season of the year, with none of the screen glare.

In this sponsored series, we’re looking at how game developers are taking advantage of Unreal Engine 4 to create a new generation of PC games. With thanks to Epic Games and Blue Budgie Studios.