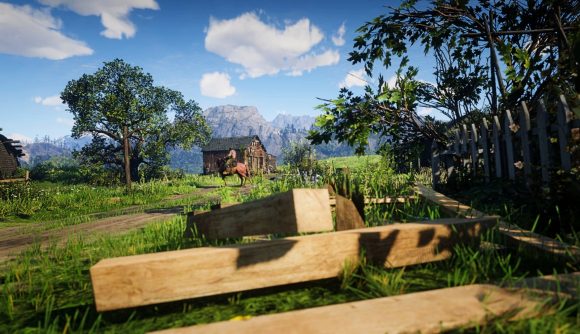 One of Red Dead Redemption 2's most alluring traits is its attention to detail. Law enforcement officers will wait for you to finish your fistfight with a bar patron before asking you to move along, and if you don't eat or rest well enough, Arthur becomes fatigued. While all these details help build a sense of immersion, there are still things that can break it. If you leave a city in ruins, it'll be new again mere seconds later if you return.

Catching all these details is a tough ask for anyone, but that's where modders come into the fold, adding tiny tweaks to make the Western game more consistent. Over the past week, one of the main mods to catch my eye was Juliet G's Enhanced Entity and World Persistence 1.1 mod. The mod itself keeps the world more, well, persistent – “no longer will going down the road result in everything looking pristine when you turn back around,” the modder says.

To accomplish the feat, uploader PixieV explains that objects, vehicles, weapons, horses, and corpses are now tracked by default and that any entity you interact with is added to a persistence ring, which you can configure yourself. Wilderness and town entities are tracked differently, and heaps of optimisations are in place to ensure the game still runs well. “By default, the mod has a performance monitoring system in place that will dynamically activate and deactivate the mod based on a user-configurable frame rate,” PixieV explains.

As a bonus, the witness system has also been tweaked, so you’ll need to be more proactive with hiding bodies on the road. They’ll be sticking around for a while, after all.

Elsewhere in the Red Dead modding scene, some of the more popular mods now simply involve popping a smoke, having a seat, or automatically greeting anyone who says hello to you. Looking over Nexus Mods’ tracker for the most popular mods over the past 30 days, those three rank the highest.

I’m sure the potential to take cool screenshots while smoking is a draw, but it’s neat how far several small mods go to create a more immersive experience.

If you’re looking for more Red Dead Redemption 2 mods, you can click the link. You can pick up the cowboy game from Fanatical here if you don’t already have it.