Struggling to track down all of the RDR2 legendary animals? Early on in the story, you’ll come across the first instance of the Red Dead Redemption 2 legendary animal hunts. These are intended to be epic fights against nature itself, pitting you and your wits (and your guns) against almost mythical creatures out in the wild west. The animals you hunt are generally much larger, much stronger, and much sturdier than their standard, non-legendary counterparts.

There are a total of 16 Red Dead Redemption 2 legendary animals to track and hunt across the map, and while the game does give you some clues to help you find them, it’s a lot easier if you just follow along with us.

Each of these hunts will reward you with lots of animal parts to turn into the Trapper for new outfits and even some unique Trinkets. It’s a great way to kit yourself out with some cool looking gear as well as the chance to boost your abilities in exciting ways. As such, you’ll want to complete these RDR2 legendary animal hunts if you want to be at your best for the more difficult firefights and story missions.

There are a couple of things worth noting when it comes to these hunts. Unlike normal animals, it doesn’t actually matter about the state of the animal when it dies. That means you don’t need to think about where you place your shots or what weapons you use; as a result, you can use something with a lot of power. The best bet for this is the Rolling Block Rifle that you get during the Pouring Forth Oil mission in Chapter 2, it packs one of the biggest punches of all RDR2 weapons so you’ll have no issue putting the legendary animals down.

Secondly, you’re going to want to use Dead Eye a lot in these fights. While you can often defeat the beasts with a well-placed shot, sometimes that won’t happen, so bring Dead Eye tonics and level up your Dead Eye, too. When you hit level 4, you’ll be able to see weak points on the animals, which means you’ll have a better chance of putting them down quickly.

To begin any of the hunts, you’ll first need to complete the mission Exit Pursued by a Bruised Ego in Chapter 2. Hosea will give you a handy little map as part of the questline that will show you the location of the legendary animals. The trouble is that it’s not a great analogue when you’re looking at the normal in-game map. That’s why we’ve put maps in below.

Once you’ve reached the destination, you’ll get a message that says “You Have entered Legendary Animal Territory. Hunt, this Legendary animal by finding and inspecting clues.”

Enter Eagle Eye and then have a look around, you should see a swirl of yellow particles stemming from the ground. Head over to where they are and inspect the clue before following the trail to the next clue. You then repeat this until the third clue, which will then lead you directly to the legendary animal.

You should also be able to see a question mark on your mini-map, so keep an eye out for that as well as using the maps for each creature and your Eagle Eye. Using all of this will lead you to the hunt itself, and then you just need to be ready to actually fight the beast.

We’ve listed the animals based on where you’ll come across them. This will more or less fit how you go through the story itself, but if you’ve got a great thirst for exploration, then it might not match up. Of course, this just means you can check out the animal you’re going for or just have a look generally. 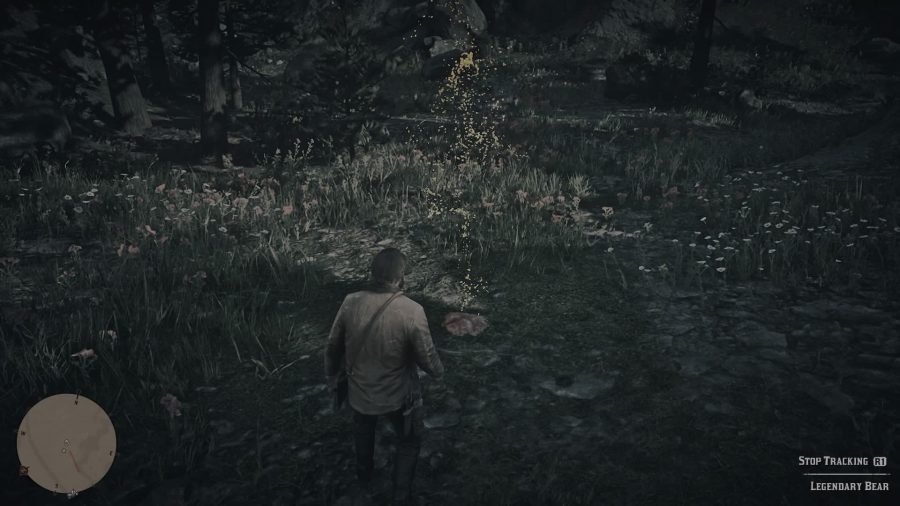 These ones have no requirements past getting through the initial encounter with the Bharati Grizzly Bear, so feel free to go wild once you can do so.

Here are the RDR2 legendary animals: 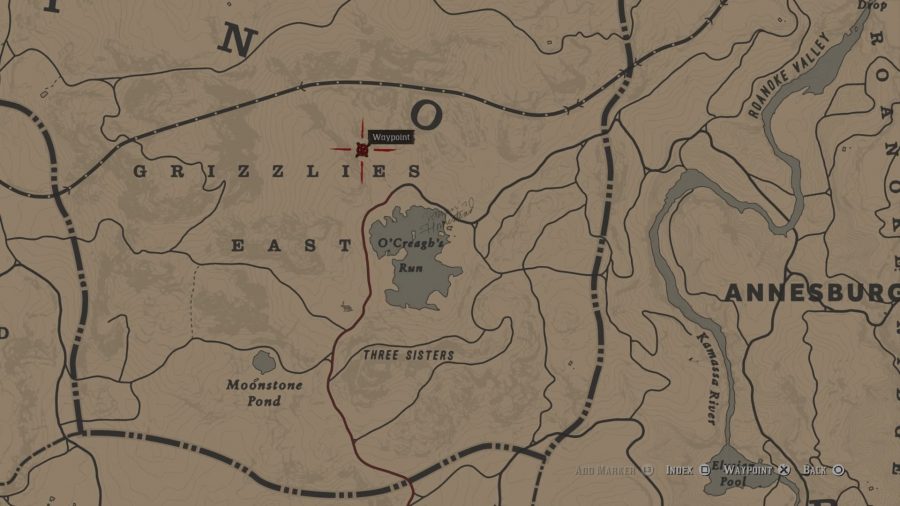 This is the beast you come across during the mission Exit Pursued by a Bruised Ego. While you do hunt it during the quest itself, you’ll have to stick around after the mission is finished to actually finish the job. If you’d rather come back at a later time, you can find it to the north of O’Creagh’s Run. Your best bet to beat this monstrous bear is to find a nice spot above the passage where the bear roams and pick him off from there. 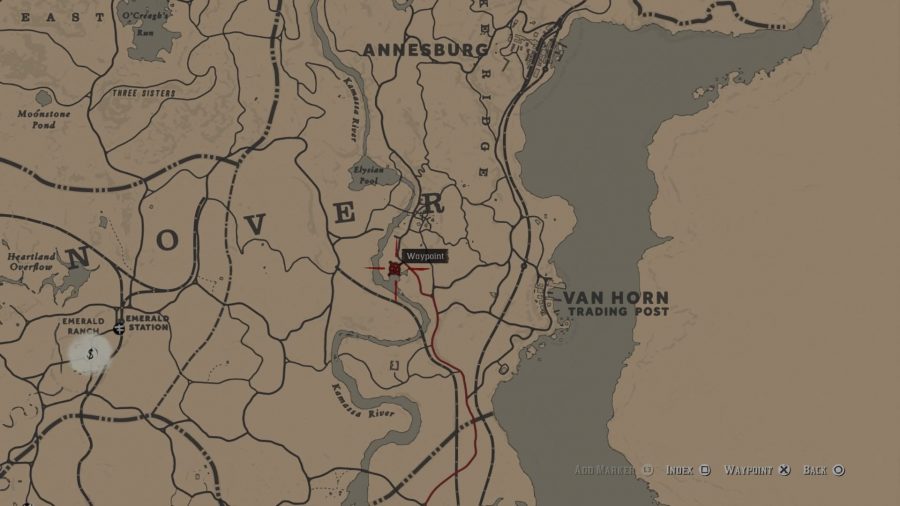 This is a much easier fight, probably due to the fact that beavers aren’t known for their ability to tear apart humans. It’s a dam easy fight in fact, and you can find it to the east of the Van Horn Trading Post at a rather large beaver dam. 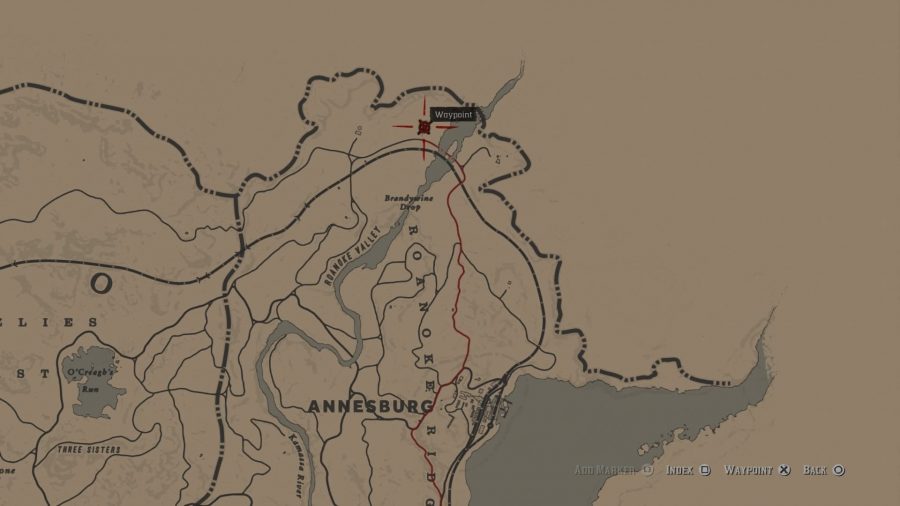 You can find this creature in the north-east of the map just north of Brandywine Drop. The good news is that despite the size of this animal, it isn’t all that angry. That may make you feel a bit bad about taking it down, but hey, you’ve gotta get that loot somehow. 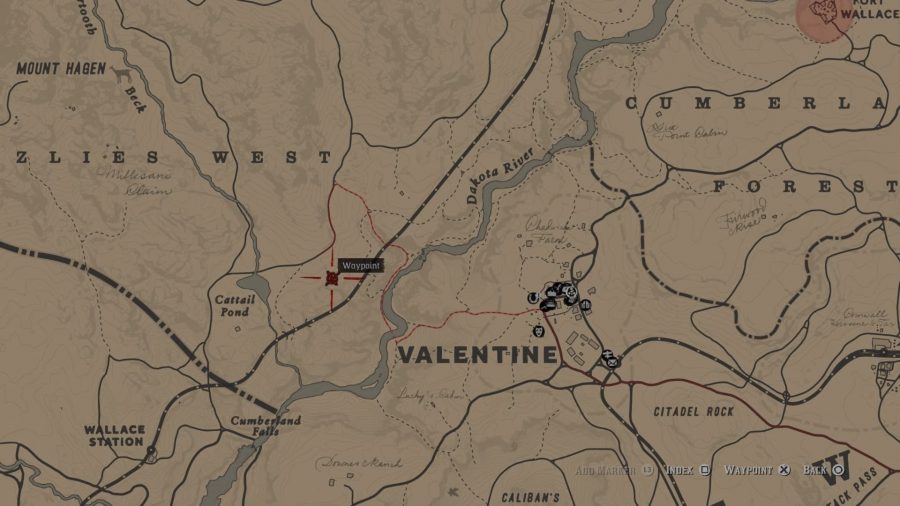 You can find this one to the west of Valentine, just to the east of Cattail Pond. The Bighorn Ram is actually somewhat skittish and will run away if it senses you or if you hit it without killing it. As ever, the best bet here is to take your time lining up a headshot with your Rolling Block Rifle and put it down. It may take a couple of shots, but that’s what Dead Eye is for. 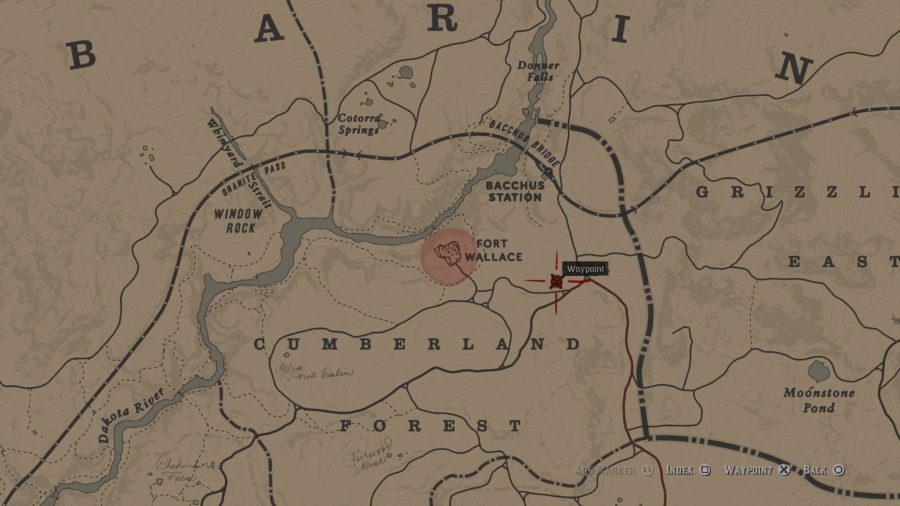 The Elk hangs out to the east of Fort Wallace. It’s another cautious animal and will run away if it spots you or if you don’t kill it with a single shot. The same tactics as always will help you take it down it quickly; line up your shots in Dead Eye, and it should fall fast. 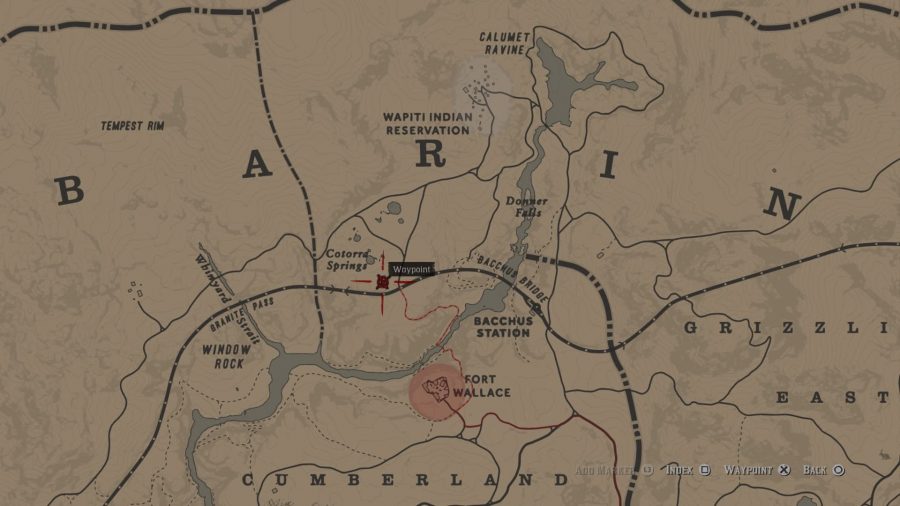 You can expect a much tougher fight with the Wolf. You can find it roaming near Cotorra Springs just north of Fort Wallace. Once you’ve found the third clue, you’ll be able to see the Wolf walking around to the east of you. Hunker down, bring out your rifle, and enter deadeye before painting it with targets. It should go down. Be aware that it’s still very tough even when it looks close to defeat, so don’t underestimate it. 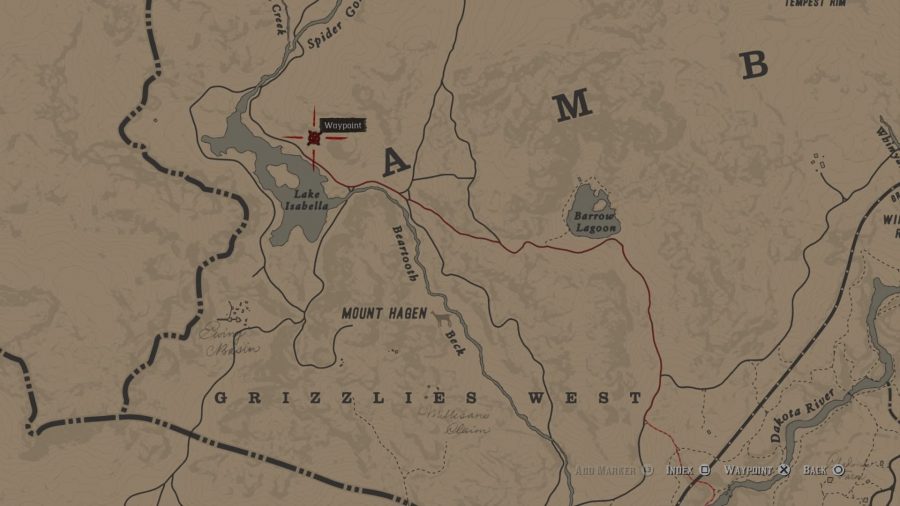 The White Bison roams the wilderness just north of Lake Isabella. This beast has a lot of health but isn’t too keen on attacking you. Keep your distance just in case and take it out before it can react with a flurry of sniper shots. Well, as close to a flurry as the rifle can manage. 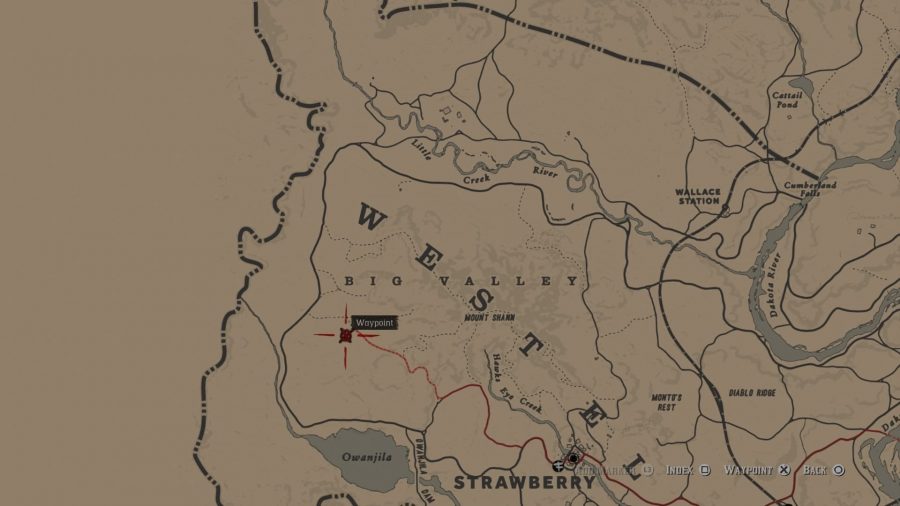 You can find the Buck to the north-west of Strawberry in Big Valley. The main challenge facing you with this beast is the amount of cover it naturally has thanks to the trees in the area. Your best bet is to take your time to find an area with a good sightline before using your Dead Eye. 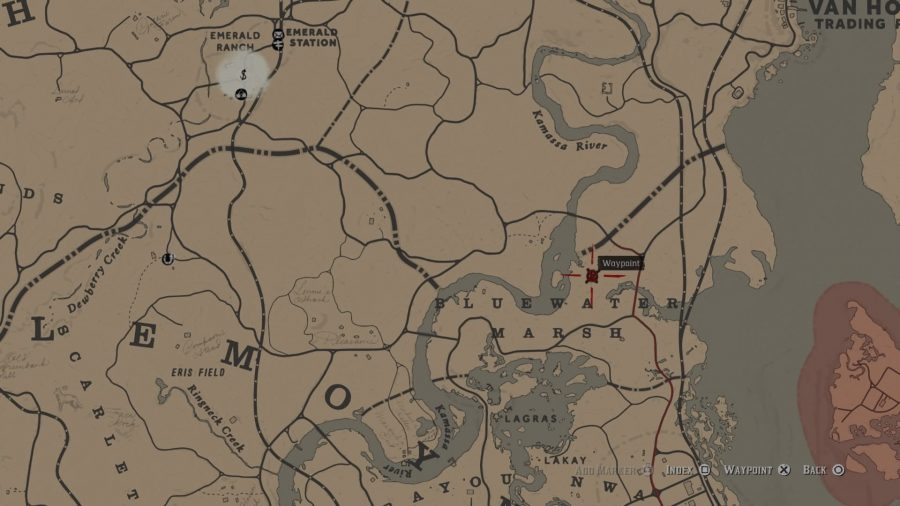 This Boar lurks in the Bluewater Marsh just to the east of a wide section of the Kamassa River and to the east of where the sea encroaches on the mainland. This is an easy one to hunt and isn’t particularly fast or tough. 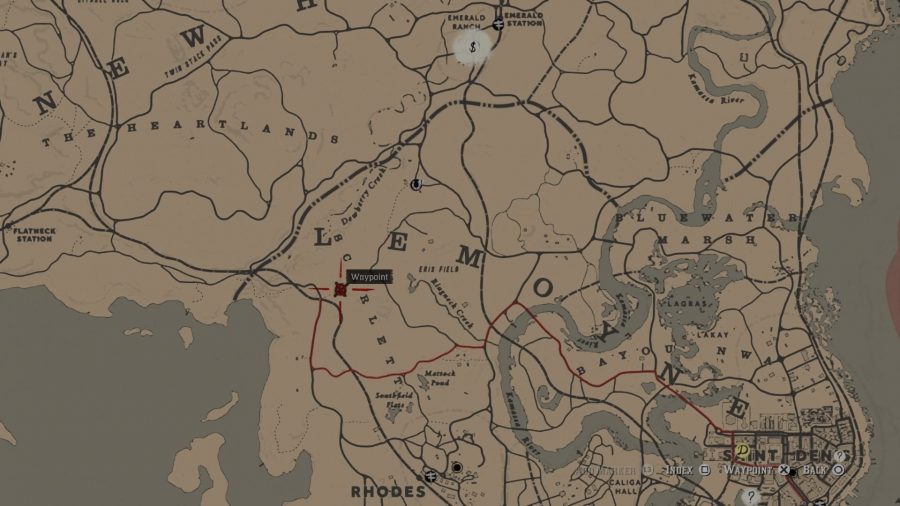 Head to the north of Scarlett Meadows within Lemoyne for this one. While the Coyote isn’t very tough, it is incredibly quick, so make sure you’re putting a couple of shots on it in Dead Eye just in case. 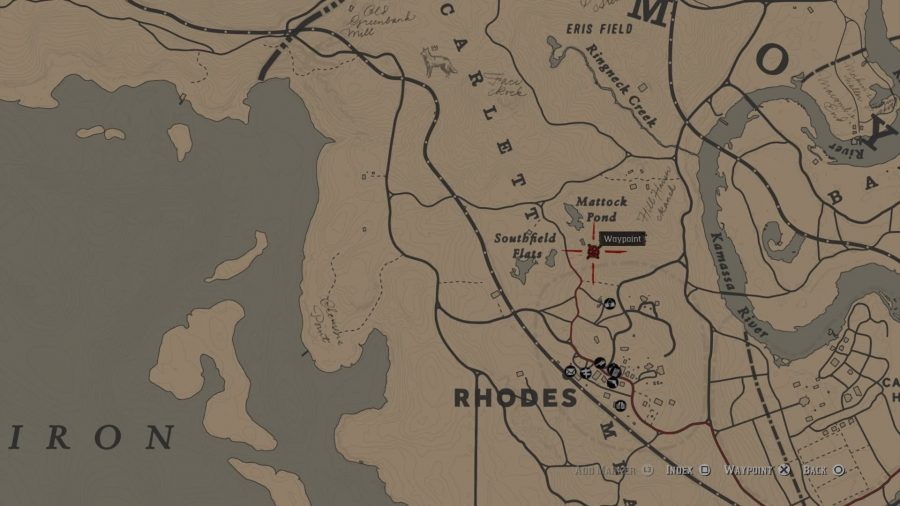 The Fox is just to the North of Rhodes, in an area called Mattock Pond. You shouldn’t have any issue spotting this overgrown white fox, nor should you have any problems killing it once you’ve got it in your sights. 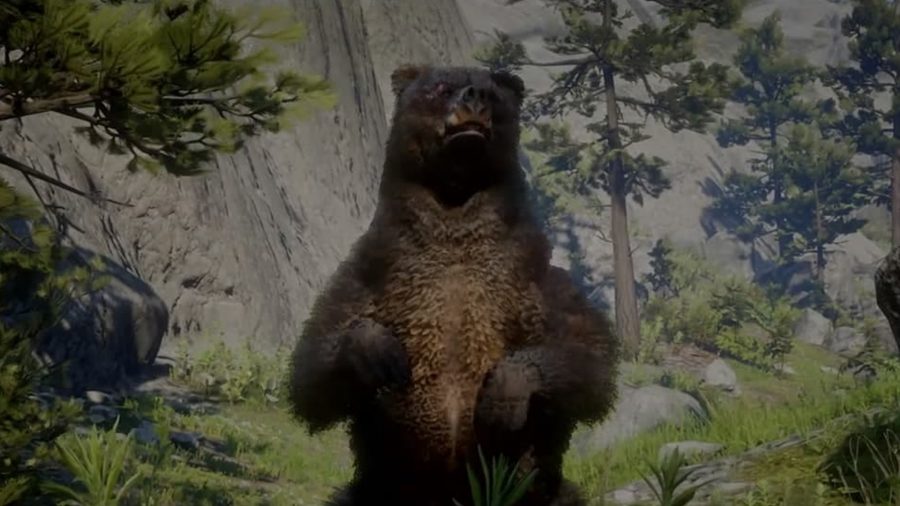 These animals all have certain things to accomplish, or points in the game to reach before you can meet them. It’s essential to keep that in mind and not try to hunt them beforehand because they simply won’t be there. 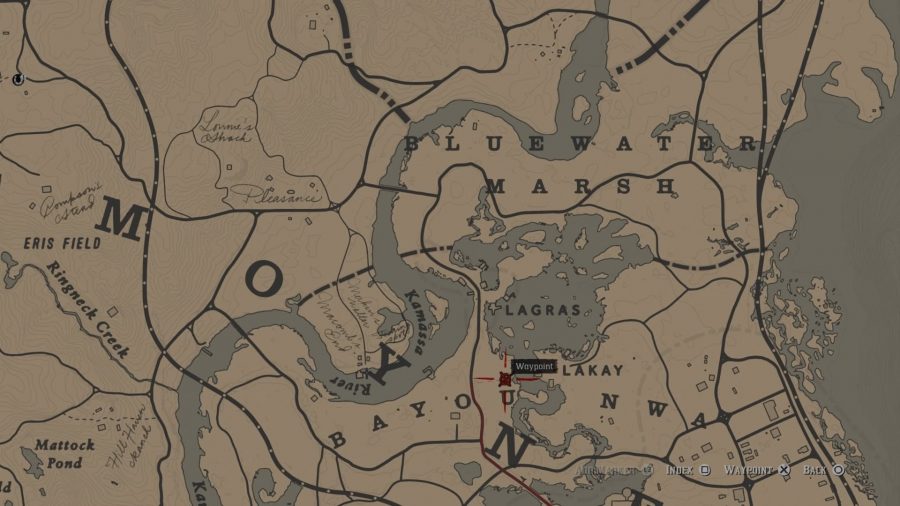 You’ll be able to hunt this ‘gator once you’ve finished the mission Country Pursuits in Chapter 4. You can find it haunting the south of the Lagras. As soon as you’ve found the third clue, you’ll need to be ready for a fight. Not only is this particular reptile huge, but it’s fast, tough, and strong. Still, line up a lot of shots from your sniper rifle, but make sure to have a powerful shotgun to hand too, as you may need something a little less unwieldy. 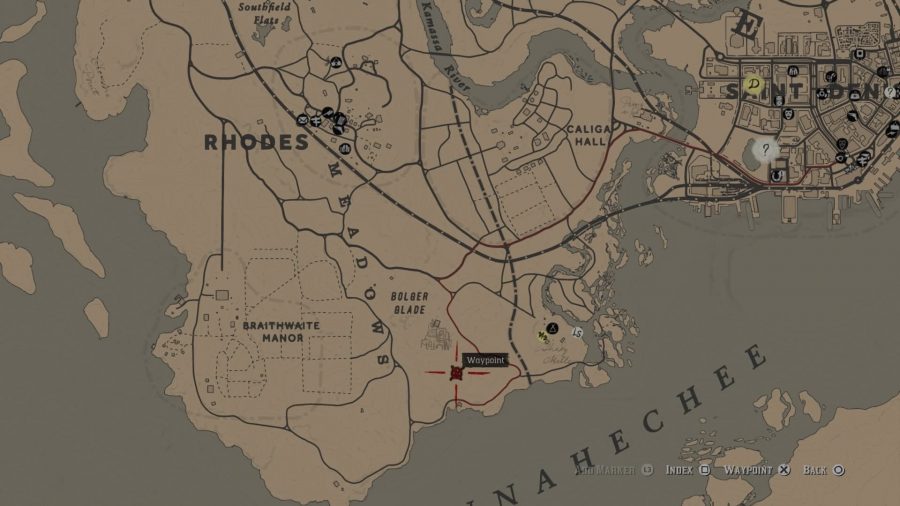 You’ll have to reach Rank 9 in Master Hunter challenges before you can challenge this king of cats. It stalks the area just to the south-east of Bolger Blade, and you’ll need to be on high alert when deciding to hunt it. While hunting it, you should be on high alert; it’ll likely try and sneak up on you and pounce on you which will instantly kill you. Go in after using a Cover Scent and keep an eye on your radar while skulking around; it will appear as a red dot a split-second before pouncing on you, and if you can dodge it you should be able to activate Dead Eye and then land a shot or two to kill it.

These hunts can only be found once you’ve finished Chapter 6 and accessed the Epilogue. They’re all located in the south-west of the map in the New Austin area. Thankfully, only the Cougar presents much of a challenge here, so you should have no issue finishing off this particular checklist. 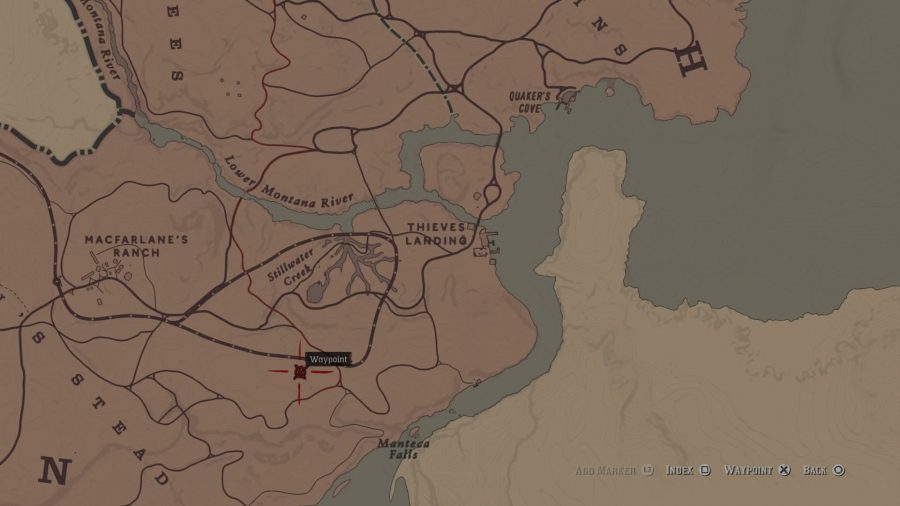 The Tatanka Bison can be found due south of Stillwater Creek. While it is a large animal, it’s not very hard to actually put down. It’s another of the animals that is likely to run away the moment you open fire, so make sure you mark a few spots in Dead Eye to give you the best chance of putting it down. 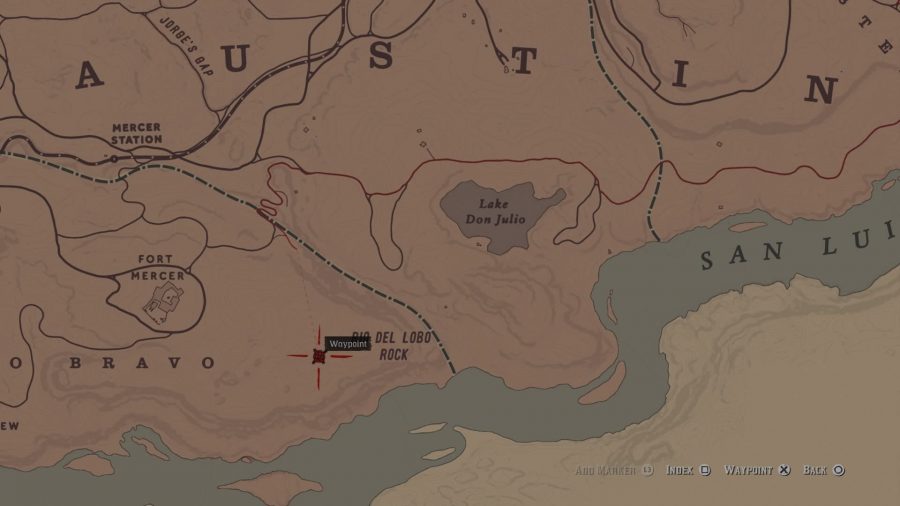 This rather fancy creature is very fast and can be found east of Fort Mercer at Rio Del Lobo Rock. It’s a straightforward fight given where it comes in the game, so you’ll be able to take it down with no issues. 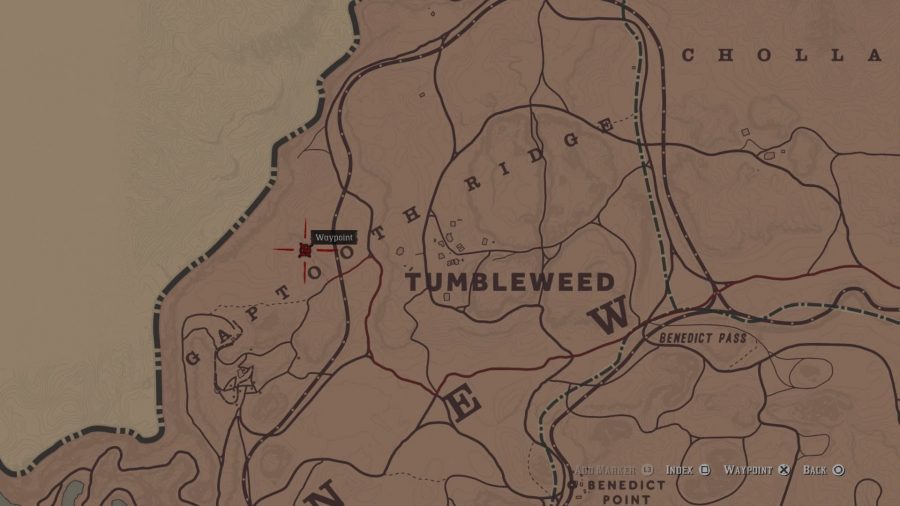 The Cougar can be found in Gaptooth Ridge, and you’re best off using a Cover Scent before starting this hunt. It’s incredibly fast and highly aggressive, so you’re best bet is to try and line up a Dead Eye with your sniper rifle and try and hit it twice before switching to a shotgun and using Dead Eye again to kill it as it charges you.

And there you have it, all of the RDR2 legendary hunts we’ve stumbled across so far. There’s plenty to get stuck into, and they all vary in difficulty. Regardless, we wish you luck on your hunts.