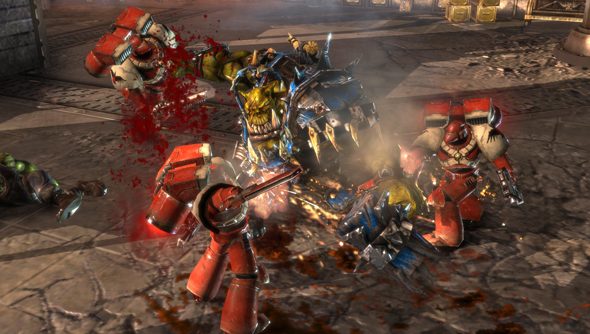 Warhammer 40,000: Dawn of War and its three ambitious expansions were on the kill list of games set to lose their servers once Gamespy expires this weekend. But about a week ago, Relic sent a squad of terminators to take back their space hulk and leave Steam matchmaking in their wake.

Dawn of War II isn’t under threat, but it does operate under the iffy Games for Windows Live – and Relic have decided to give it the same treatment. In short order, all of the progressive RTS games in Relic’s fold will be operating under the same matchmaking system and backend developed for Company of Heroes 2.

The loss of Dawn of War’s multiplayer component is “not an outcome anyone at Relic would want to see”. The major update that reached the game on May 22 will not only safeguard against that, but also improve the matchmaking experience – which will now be handled through Steam.

Dawn of War II’s migration is “in progress”, and in the short term Relic expect players will have issues with multiplayer for both games.

“Recreating the multiplayer infrastructure for seven titles is no small feat, and there will be bugs,” wrote Dawn of War series design lead Philippe Boulle. “Ultimately, we felt that it would be better to get the update out in a slightly imperfect state in time to prevent an outright interruption in multiplayer play. So, bugs.”

However, Relic are committed to squashing those and ensuring all seven(!) versions of Dawn of War make it to Steam fully functional.

“I came to Relic in 2005 to work on the product that became Dark Crusade and went on to run narrative and campaign on both Dawn of War II and Chaos Rising,” said Boulle. “To be working on these titles again is a joy, and on behalf of all of us, I’d like to thank the fans who have continued to keep DoW in their hearts. You guys rock.”

Work on keeping past Dawn of War games preserved began as soon as Relic crossed over from THQ to Sega. After years of Total War, it seems the publisher understands the value of a back catalogue.

Isn’t it interesting that the Dawn of War series still has a design lead? What do you suppose it might need one of those for?