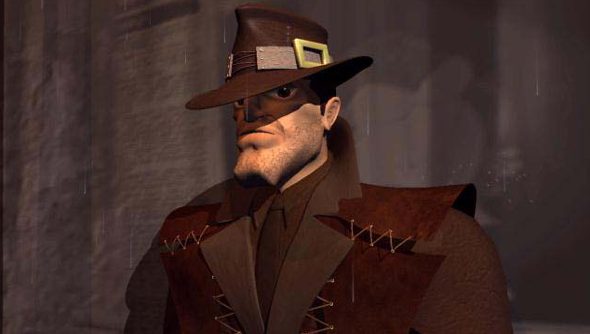 I sometimes think we can appear to be a bit selfish when, as fans, we mourn the death of creators. Unlike their friends and family, our association with them comes from their works and, in our minds, the creator and their creations are inextricably linked. So we mourn the loss of the artist, in part, because of the loss of the art.

This is why I was hesitant when I first thought that I’d like to remember Sir Terry Pratchett, who passed away today, by remembering some of the games he had a hand in helping bring to life. But maybe it’s not selfish. Maybe it’s a perfectly reasonable way to celebrate someone we never knew personally, but who had an impact all the same.

So here’s why I think that Discworld Noir – a game Pratchett didn’t write, but consulted on and created some dialogue for, and without a doubt could not have existed without him – is one of the greatest overlooked adventure games. 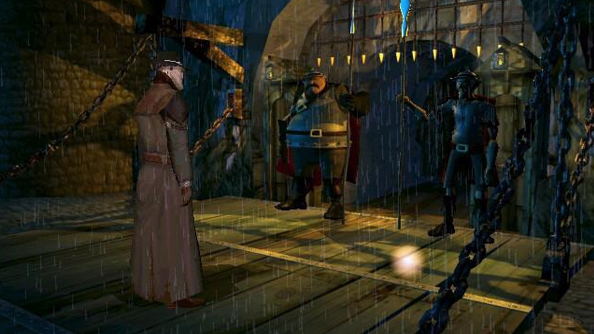 In 1999, the fate of the adventure game genre was sealed, and it would take a decade for it to start to recover. If Grim Fandango couldn’t sell when it came out in October of ‘98, what could? In the retelling of the decline of adventure games, the story always goes that a developer would approach a publisher, and they’d get knocked back. It was too risky. Nobody is making adventure games.

Noir was not the first Discworld game. There was a ZX Spectrum game based on The Colour of Magic, and the rather well-known Discworld and Discworld II adventure games, with Monty Python alumnus Eric Idle in the role of buffoon-extraordinaire and wizard, Rincewind. They were traditional point-and-click, puzzle-heavy adventure games, and the first is notorious for being bastard-hard. Noir took a different approach.

Out went Rincewind, and into the protagonist’s role came the world’s only PI, Lewton, voiced by Rob Brydon. There are puzzles in Noir, but they are stretched out and split up with long gaps given exclusively to a great deal of chatting and gumshoe work. It was a great marriage of game design and setting, because it put the bizarre denizens of Ankh-Morpork and Pratchett’s endearing writing style – which endures even in the many parts he didn’t directly pen – front and centre.

This is all stuff that Telltale figured out a decade later. When you’re working with an existing IP, like The Walking Dead or Discworld, filling them with puzzles can feel a bit like a game being crammed into a setting, instead of the two being equal partners. The first two Discworld adventure games were funny, satisfying romps, but the game and the world kept getting in the way of each other. In Noir, they work together. 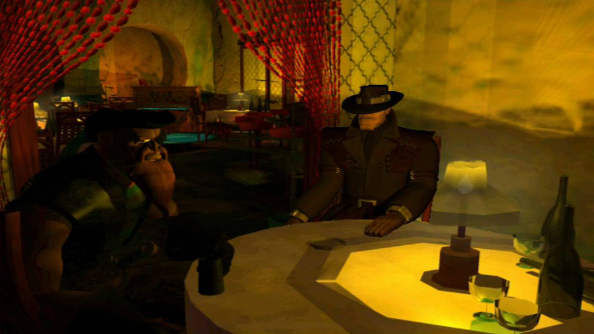 Lewton’s a proper detective, you see. Sure, he solves a few puzzles, but he’s more into solving crime. Well, he’s more into hard-boiled soliloquies than anything else, really. He’s an investigator with a notepad full of lead and a head full of questions. While he dabbles in traditional point and click stuff, there’s a process beyond slapping random objects found in the street together. The aforementioned notepad is a clue repository, and things scribbled into it can be brought up in interrogations, conversations or even applied to objects. It’s a mechanic that’s less knowingly game-like and illusion-shattering.

It’s not laden with consequences and branching paths, but is still more evocative of later games like L.A. Noire and The Wolf Among Us than the earlier Discworld adventures. And like The Wolf Among Us, The Walking Dead and the other franchises Telltale’s worked on, it stands as an excellent homage to the source material.

Noir is a celebration of Discworld, but it doesn’t celebrate Pratchett’s world by recycling it. It’s an original story with a number of characters exclusive to the game. It’s a collision of worlds, with a pulpy noir detective tale slamming into Pratchett’s brand of fantasy, with werewolves, trolls and satirical gags. But Discworld is always smashing things together like that, the mundane and magical, the modern and fantastical. So in doing something new, it manages to be in step with the books that inspired it.

I’ve just spotted Snuff, the last Discworld novel I read, sitting on one of my bookshelves and I’ve gone back to feeling terribly miserable again. It seems wrong, because I’m so used to thinking about Terry Pratchett and chuckling. I should read some Discworld tonight, in case I can’t find a way to install Discworld Noir on my PC.

Terry Pratchett died today, at home and surrounded by family. While his passing leaves the world a poorer place, it’s still filled with his stories, and the ones he inspired.