There is an enduring excitement at the prospect of being dropped in the middle of nowhere, naked and alone in the middle of the woods. I am talking about videogames, by the way – I am no longer allowed to discuss why I know that to be the case outside of games as well.

Regardless, survival genre devotees will be immediately aware of the game to which I am referring. Solomon Lee and Jeremy Wood, co-founders of Frostkeep Studios, have Ark: Survival Evolved’s crown in their crosshairs, and they’re using the lessons they learned while working at Blizzard to take it.

Want more? Here are the best survival games on PC.

“Let’s take EverQuest and make it better, that was basically the design doc for World of Warcraft,” Wood says. “Blizzard found all the things that really make it tick, sanded off all the rough edges, and borrowed things from other genres to make it something new, and that’s what we’re trying to do here.”

This time, their riposte to the likes of Ark: Survival Evolved and Rust is Rend, the debut game for their fledgling studio.

One difference to Studio Wildcard’s survival behemoth is already unmistakeable: the blonde, muscular starting avatar is dressed, minimally, in leather underwear that tastefully hides his special bits. No doubt breathing a sigh of relief that his masculine pride remains intact, this character can explore his faction’s home base shrouded in an impregnable shield (if not more clothing) – a key difference in comparison to Ark’s opening stages.

Like Subnautica, you start in the safest area of Rend, but you can travel to more perilous locations once your gear, knowledge, and confidence builds. These days it’s refreshing to see a game in which the safe zone is not shrinking. 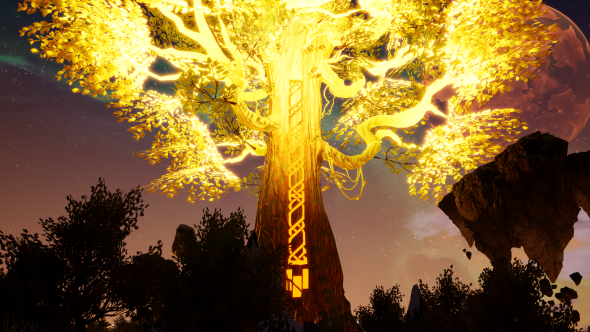 This base is one of three located in each corner of Rend’s triangular map. Each belongs to a warring faction whose existence on the server depends on mastering the world and its resources. You have plenty of space in which to explore, too: on foot, it will take 30 minutes to reach the enemy’s gates.

In the centre of the map is the gargantuan World Tree that has three glowing progress bars etched onto it. Each meter corresponds to the number of souls gathered by each faction and stored in their Divinity Stone. A faction must fill their bar to win, and yes, it is possible for all three to be booted off the server. Each of these precious stones lies safely within each base but, if it is destroyed, you and your faction are wiped from the server for good. Up to months of your team’s progress can be dissolved, just like that.

You can help your faction in various ways, both in PvE and PvP. More support-orientated players can explore the world to harvest resources and craft powerful gear, whereas those itching for some fisticuffs can choose one of many offensive shooter-based playstyles to take capture points that offer a strategic advantage. For as long as that spot is held, your faction can take advantage of rare loot with the power to turn the tide of battle. Either way, you will find yourself specialising as time goes on, but it is unlikely that anyone will see all of the possible perks as no server experience will be the same.

But how can Divinity Stones be destroyed when they are safely stored behind a faction’s shield? Well, that shield disappears for an allotted time for Rend’s most exciting event, The Reckoning.

There will be a Reckoning 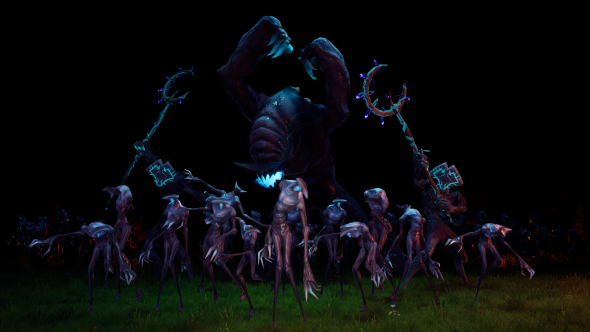 At a preordained time each week, monsters of all shapes and sizes launch themselves at your hideout – an attack for which your faction will need to prepare. The larger blighters bash perimeter walls, mages throw projectiles from afar, and your typical cannon fodder will eagerly dispatch any survivors. Even if your squad can stagger from the wreckage unscathed, Reckonings will increase in intensity and new monster types will be inserted regularly: Wood teases the possibility of portal-wielding beasties that can materialise behind defensive lines and wreak havoc on even the toughest of fortresses. Reckonings cannot be mastered but they can be survived.

All three bases will be vulnerable simultaneously during this event so, if waves of fearsome monsters posing an existential threat do not frighten you enough, you can enlist a brave and suicidal band to strike another team’s Divinity Stone. Since you can see on the World Tree if one faction is storming ahead, you could find yourself teaming up with an enemy faction to scupper the ones in the lead.

For Lee and Wood, The Reckoning is one way in which they are ironing out the ‘pain points’ the team at Frostkeep take issue with in survival games.

“There’s so much frustration built into the genre,” Wood says. “It can be part of the charm, but a lot of it is unnecessarily punishing. “Survival games have this promise of grand war, but the reality is, most of the time, you’re either going to be fighting 20 on two battles or you’re just going to have your stuff taken from you at four in the morning.”

In Rend, every faction member knows when a Reckoning will happen, can plan accordingly, and, most importantly, have the “opportunity to experience these wars all the time.” If you cannot find a server with a suitable Reckoning time, you can make a custom one with the freedom to tweak almost everything.

Twitch streamers have already responded with considerable interest: they can guarantee action for their viewers to enjoy. However, it remains to be seen whether viewers and players will be attracted to the game outside these major events. 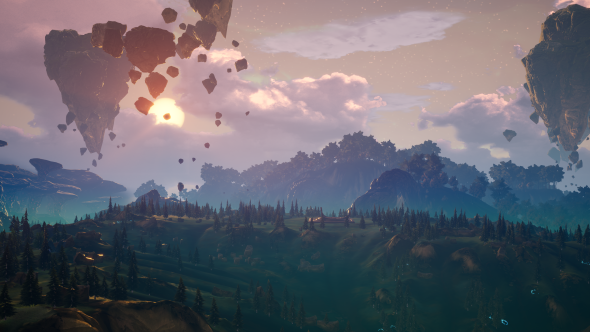 Frostkeep also want to cement Rend’s spot in the survival genre in terms of aesthetics. Visually arresting, the game’s fantasy setting infused with Norse mythology is reminiscent of the timeless art direction of World of Warcraft. “Survival games tend to be very realistic, very brown and grey,” Wood argues. “We tried to preserve a lived-in, believable aesthetic, but with colour.”

Nowadays, with Don’t Starve, Subnautica, and Fortnite’s PvE mode, Save the World, there are plenty of survival games that steer clear of gritty, po-faced realism when it comes to art. That said, Rend’s visual style is certainly distinctive and more appealing than Rust and Ark.

In typical survival style, Rend is not a game that holds you by the hand. It is up to you to decide how you will help your faction, be it on the front line, or by assiduously picking flowers – us fraidy cats know what we’re going for.

There is a lot to learn in this complex survival game and it is certainly not for everyone: you can risk days and weeks of work as murderous monsters organise outside your base, ready for the shield drop acting as their green flag, or if you gamble on an unwise foray to an enemy base. Frostkeep Studios have thought carefully about survival games and sampled others to ensure that there is a niche with Rend’s name on it – now they just have to endure in an already competitive genre.

Rend comes to Steam Early Access later this year. Let us know if you will be exploring its mythological world in the comments below.