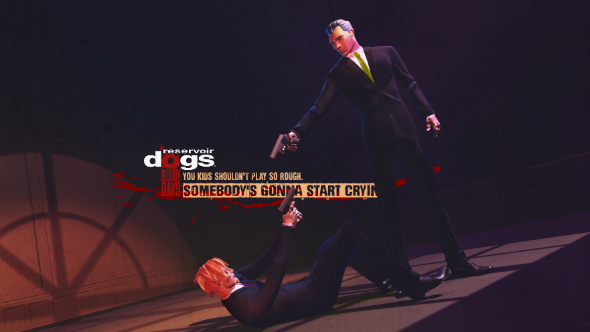 Big Star Games and Lionsgate are partnering up to release a new Reservoir Dogs game, one that hopefully makes up for Volatile Games woeful third-person shooter adaptation from 2006. Taking the form of a top-down action-shooter, Reservoir Dogs: Bloody Days features a time-shifting mechanic called Time Back, which will let the player rewind time allowing them to control the whole crew’s actions as they attempt to pull off the heist that leads to film’s tense, drawn-out whodunit scenario. You can watch the brief reveal trailer above.

Check out the best indie games on PC if you’re after something that doesn’t have an enormous license attached to it.

According to the press release, “every time the clock is turned back the outcome of the heist hangs in the balance as each Reservoir Dog plays their role in finishing the job and completing the bloody escape.” Reservoir Dogs: Bloody Days will feature the main six heist characters from the game: Mr. Blonde, Mr. Blue, Mr. Brown, Mr. Orange, Mr. Pink, and Mr. White. Be warned though, their appearances aren’t based on the actors who played them in the movie, so sadly you won’t be able to hand out as-whoopings as Steve Buscemi or completely lose control as Michael Madsen.

“As huge fans of Reservoir Dogs, we’re very focused on creating a highly addictive experience that stays true to the tense, dramatic vibe of this unforgettable movie,” says Big Star Games CEO, Liam Patton. “By taking control of different characters for overlapping bursts of time, players must utilize the strengths of each squad member to carry out the game’s missions, with every move and shot creating a butterfly effect on the overall outcome.”

We’ve gone ahead and put all the Reservoir Dogs: Bloody Days screenshots and character art in an Imgur album for you.