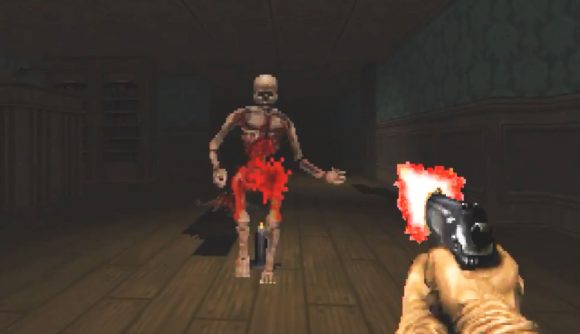 With the success of the Resident Evil 2 remake and the upcoming release of Doom Eternal, it would seem that 2019 is gearing up to be a pretty good year for gory 90s shooters. And with those two games in particular riding high, it’s of little surprise that one modder has brought them together.

Not their newer outings, of course, but the original versions of the game. Doom modder GearboxGunman says that they’ve “decided to replicate Resident Evil mechanics” inside id Software’s famous FPS.

You can check out what that looks like in the tweet I’ve embedded further down this article. Despite maintaining many aspects of Doom’s personality – most notably a first-person perspective and its famous shotgun – the mod is also immediately recognisable as a Resident Evil game. There’s something about those shambling zombies and that interior design that perfectly captures the horror series, although you won’t be playing as either Leon or Claire – it’s Doomguy who shows up in the mirrors at the beginning and end of the video.

The mod isn’t playable just yet, but GearboxGunman says that they’re planning to release a demo, which hopefully won’t be too far away.

Take aim: Here are the best FPS games on PC

You can check out the video for yourself in the tweet below. It’s early days, but upcoming updates will add new rooms, a pump-action shotgun, and the terrifying Tyrant.

Decided to replicate Resident Evil mechanics inside of Doom. pic.twitter.com/RQKHTe0A5M

The Doom modding scene’s longevity is no secret, but Resident Evil 2 is doing pretty well for itself, too. Dustin’s beloved ‘Mr X Gon’ Give It to Ya’ meme has been brought to life, while another modder is looking to bring the original game’s fixed-camera perspective back to the game. I’m not sure that the new scene will outlive Doom’s, but it’s fun to see what the community is coming up with.