Resident Evil 3 kicks off by showering you with all of the ingredients that made last year’s Resi 2 Remake such a momentous return to form for the series.

During your first encounter with a zombie you have only six or seven handgun rounds, and after quite literally shooting the shuffler’s face off it’s still lurching and creeping towards you, cutting off your angle to escape. The streets of Raccoon City are busier and brighter than the eerily quiet corridors of Resident Evil 2’s police department, but crashed vehicles and debris belie their seeming openness and constrict your movements. Similarly, the city’s avenues link together via unlockable doors, shops, and side alleys, creating a potent progression loop as each area reveals new weapons and key items that motivate exploring further.

Capcom constantly toys with your expectations, teasing future scares by littering the streets and buildings with bodies that could spring back to near-life at any moment. You soon learn that any corpse you pass is probably going to reanimate, whether that’s a police officer dead at the wheel of their crashed cruiser snatching at you the second you wander past, or the occupant of a body bag following you into a nearby shop. Like the best haunted houses, Resident Evil 3’s opening act knows exactly where you’re looking and always sneaks up on you from the other direction.

Deconstructing the city’s undead inhabitants is another returning pleasure. Every bullet tears an actual lump out of a zombie, and you’ll often have to physically cave their face in with pistol rounds before they collapse. In the game’s larger interconnected areas you have to be very mindful of your ammo, as you’ll often have to deal with more threats than you have bullets. Every missed shot will make you wince and the pressure to land the next one ratchets up exponentially with every stumbling movement the undead horde makes in your direction. 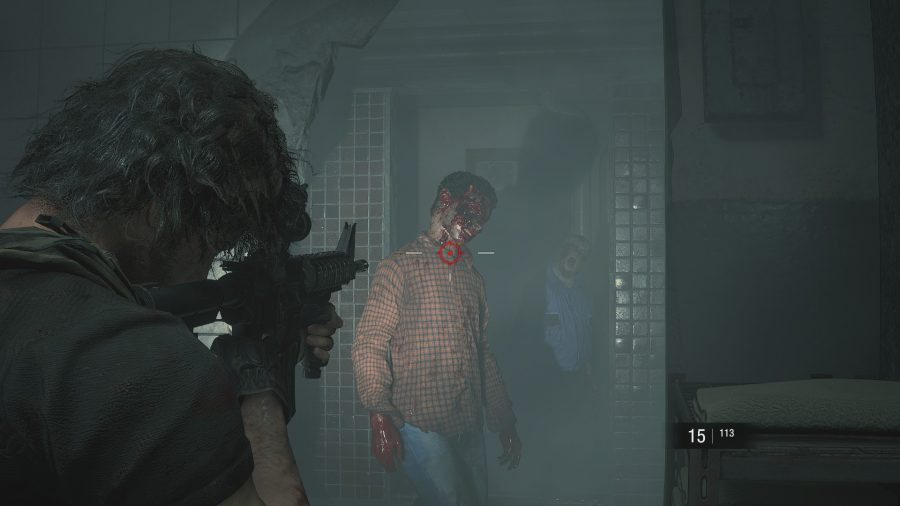 Even when playing as the assault rifle-toting UBCS mercenary, Carlos Oliveira, who often has a couple of hundred rounds, there’s immense pressure to make every single one of them count. You never know when a tougher enemy like a crocodilian Hunter will crash in, gobble up every bullet from your 60-round mag, and ask for seconds. Capcom’s ability to distribute just enough ammo to see you through each section is masterful, leaving you with almost no spare rounds and an elevated heart rate after many fights.

Alas, these exciting, Metroidvania-like episodes only make up about half of the campaign’s runtime. The rest is more linear and feels like transitional filler, ranging from boss fight arenas and chase sequences to simple corridors and large puzzle rooms. For the most part, these see main character Jill Valentine and deuteragonist Carlos Oliveira running and gunning through any threats that fall into their path. All the careful pacing and resource management of the game’s open areas is cruelly jilted in favour of a quickened pace, but these action-packed sequences ironically never match the thrill of scrabbling around a pitch-black corridor for a couple more bullets. 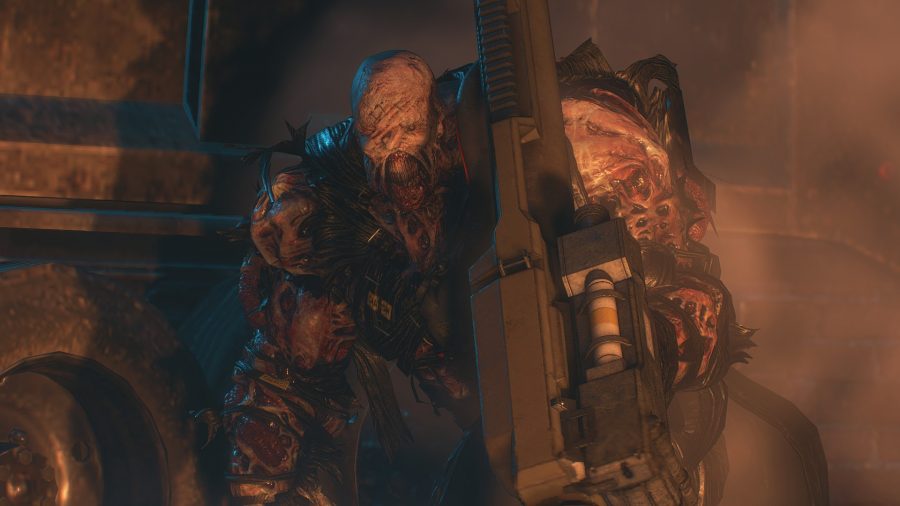 Perhaps the biggest surprise is that the Nemesis is not, as many had guessed, just a souped-up version of Resident Evil 2’s Titan. Rather than stalking you across the map, it only shows up for big set piece moments like chase sequences and boss fights. The former are some of the most fraught moments in the whole game, with plenty of skill and patience required to dodge Nemesis’ strikes and some opportunities for cunning players to stall the mutated monstrosity by shooting an explosive barrel or faulty generator. The unceasing pressure of Nemesis behind you, while you’re desperately trying to dodge roaming zombies ahead, is like sprinting along the edge of a straight razor.

More like this: Here are the best horror games on PC

Boss fights provide some of the main story’s best moments as Jill repeatedly comes up against an increasingly ferocious, animalistic, and grotesquely mutated Nemesis. Mechanically, there’s nothing new or inventive about these boss encounters, but Capcom does a superb job of establishing Nemesis as a relentless force of death. Right from the start of the game it’s capable of mauling Jill with just a couple of attacks while you can burn through several clips before dealing any noticeable damage. It’s a proper David and Goliath matchup and Jill Valentine earns bonus badass credentials every time she squares off against the creature.

Unfortunately, outside of these bouts neither Jill nor Carlos make particularly interesting characters. Their story is concerned entirely with escaping the zombie apocalypse that’s swallowing Raccoon City, with little space given for the kind of interactions that helped humanise Resident Evil 2’s Claire Redfield. Jill ‘supercop’ Valentine is an unmitigated badass, but there’s little to no depth to keep you invested in her plight. Meanwhile, Carlos suffers the same fate as Leon: impeccably gorgeous bangs but no personality whatsoever. 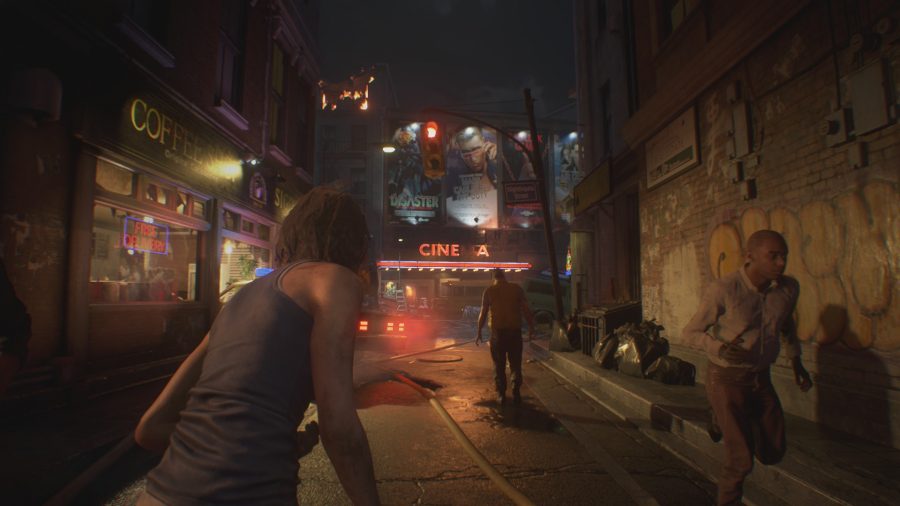 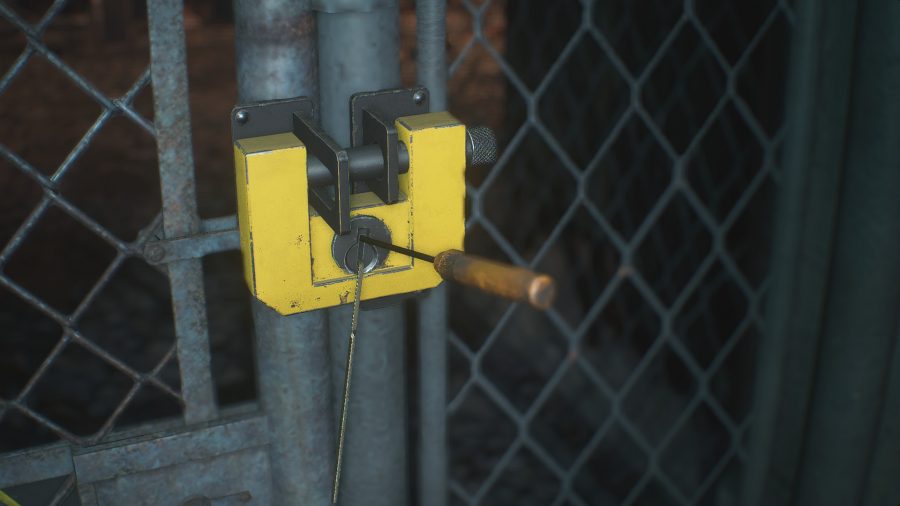 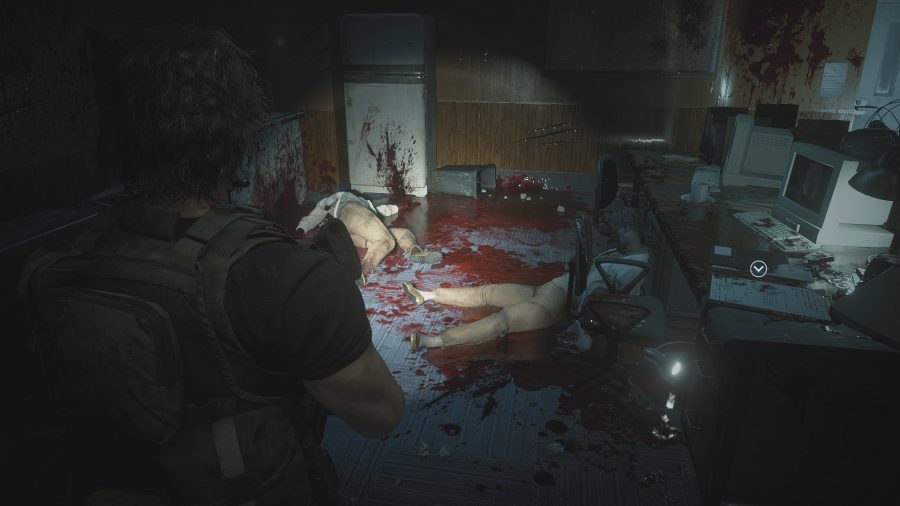 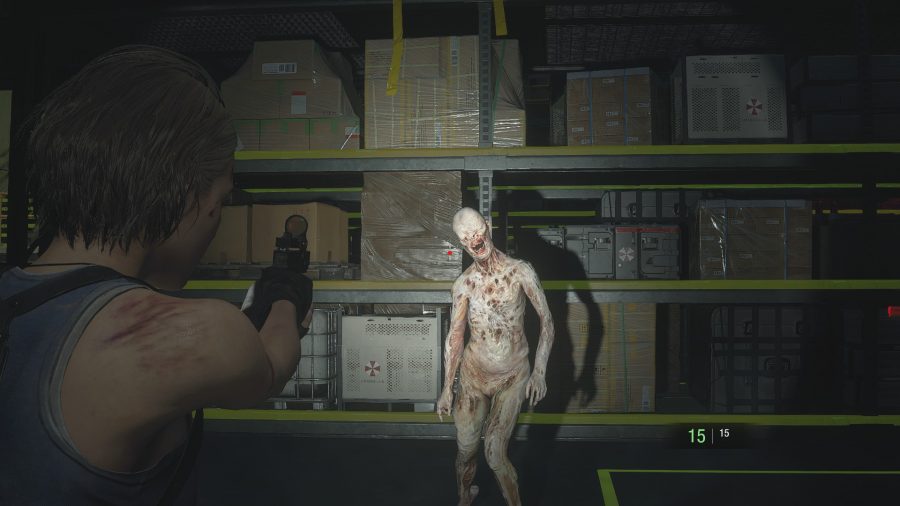 Resident Evil 3 also struggles to strike the right tone across its narrative, falling somewhere between the sincerity of last year’s remake and the campiness of the series in the early 2010s. You don’t ever really see the human side of the zombie outbreak, and at times Jill seems to forget about saving innocent civilians altogether.

Other tweaks, like slightly limited gore effects and severely reduced collision physics, even make the world feel less realistic than last year’s remake. Zombies can’t be chopped in half with a shotgun shell and they’re generally trickier to dismember, which makes them feel a little less tangible and gives you fewer tactical options. It also seems there’s no ragdoll physics for zombies in Resident Evil 3, so undead will no longer wander into their crawling colleagues and tumble over them. Stranger still, while there are a few goofier weapons to discover, they’re buried in a main menu ‘shop’ waiting to be unlocked with credits you earn by completing gameplay challenges, rather than hidden in the world or as easter eggs.

Playing the campaign on Normal difficulty, the credits roll after ten hours – although I could have easily shaved a couple of those off if I were in a hurry. While the majority of Resident Evil 3 is as tense and tactical as the series’ best, the jarring switches of pace and lack of a settled identity dilute the experience. 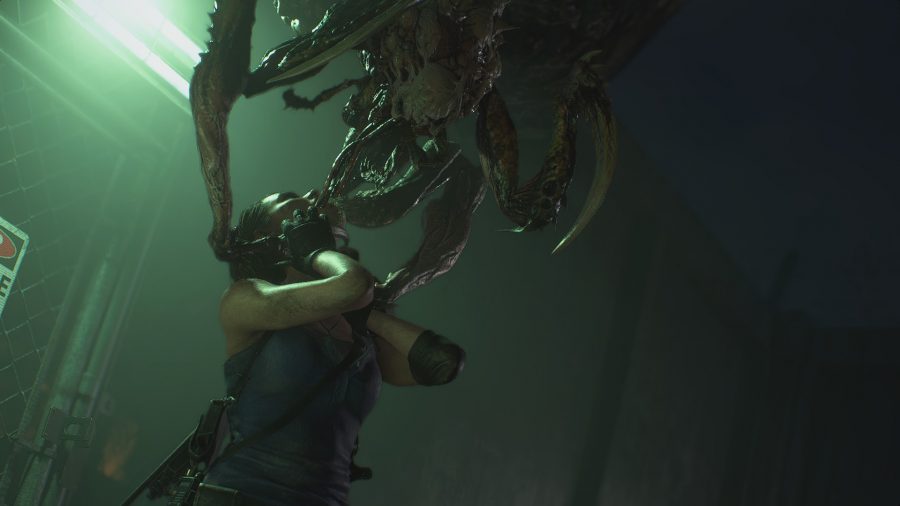 There is, it should be added, a substantial multiplayer offering in the form of Resident Evil Resistance, an asymmetrical mode that sees one player running an Umbrella Corporation experiment while the subjects of said experiment try to battle through the various nasties and escape. Given limited pre-release multiplayer populations, we’ve not managed to get enough time with the mode just yet and want to see it running in a live environment before reviewing this component, so expect our updated thoughts shortly after the April 3 release date.

Brraaaiiiinns? Here are the best zombie games around

There’s no denying that Resident Evil 3 is gutsier than last year’s Resident Evil 2 Remake. Capcom has mixed the slow-paced survival horror of last year’s outing with a relentless action movie plot. For the most part it works, but it has left Resident Evil 3 with a grave personality crisis that too often abandons tension in a less effective pursuit of high-octane thrills.

Capcom's latest is still one of the better entries to the series, but isn't quite sure if it wants to be po-faced and terrifying or a campy, blockbuster shooter.