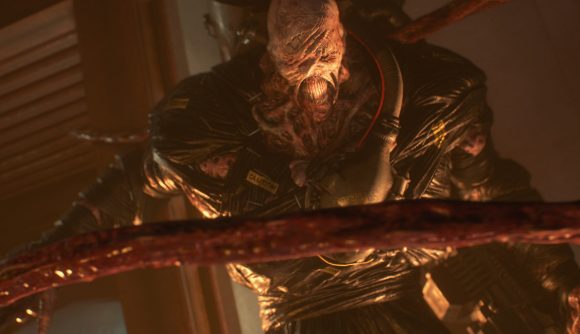 March 6, 2020 Resident Evil 3 remake’s Nemesis can bust into save rooms, not safe rooms

As if a full game of running away from a giant monster weren’t enough, word came down today that the Resident Evil 3 remake would provide no safe haven from Nemesis. However, it turns out that safe rooms are actually safe after all – there are just certain rooms with save points that aren’t protected, just as it was in the Resident Evil 2 remake. (Unless Capcom is just telling us this to really preserve the scares.)

As GamesRadar – sister to Official Xbox Magazine – clarifies: “OXM reported on needing to dodge past the Nemesis when he broke into a room with a progress-saving typewriter. This location was not, in fact, a designated safe room. The clue’s in the music, as is traditional in the Resi franchise – and not all save points are in safe rooms.”

So like Mr. X from the Resident Evil 2 remake, the new Nemesis will likely simply hover near the safe room door for a bit before wandering away. Clearly, the new Nemesis has not taken velociraptor lessons to learn how to open doors.

Don’t expect Nemesis to be a cakewalk, either way. “The director looked at what they had done with the Tyrant in RE2,” producer Peter Fabiano tells OXM, “and was like, ‘Wait a minute! They’ve Nemesis-ified him!’ So it was like taking it one step further – we needed to make Nemesis ferocious and a real threat, and I think you’ll feel that when you play the game.”

As it appeared in the early Resident Evil 3 remake gameplay, Capcom has confirmed that there’s a more robust dodge mechanic here. You’ve got both a normal quick step as well as a perfect dodge that’ll let you play RE3 as a bit more of an action game – though the devs say it’s still survival horror through and through.

That’ll help you against the Nemesis – which is capable of one-hit kills – as well as a selection of “new creatures.” It also looks like spiders will return this time around, so arachnophobes beware. The world of horror games gets more chilling by the day.