One of the biggest problems with Burial at Sea Part One was that it compartmentalised combat and storytelling, placing them neatly into separate boxes and completely sealing them away from one another. It’s an apt enough metaphor, given how the Irrational Games family are busily packing away their belongings and shutting up shop. So Burial at Sea Part Two, had the metaphor held together, should have been a useless collection of broken Christmas lights and garlic crushers, all of the fiddly crap that gets hurriedly bundled into the last empty cardboard box before the movers arrive.

But it’s not. Instead Burial at Sea Part Two is some of Irrational’s best work, drawing BioShock and Infinite closer together than they’ve ever been, while even managing to engender the spirit of System Shock at the same time. They’ve unpacked a pair of wine glasses for one last celebration, surrounded by boxes, a modest toast to all they’ve done.

In less poetic terms: BioShock Infinite: Burial at Sea Part Two avoids all of the problems of Part One by splicing the storytelling a combat into an interlocking whole. You play as Elizabeth in Rapture, shorn of her dimension warping powers (because videogames) and narratively less inclined to fight splicers outright. Instead, the world and the level design pushes you towards acting more stealthily, using things like ventilation shafts to circle around groups of enemies and pick them off from more advantageous positions.

A new Peeping Tom plasmid lets you see enemies through walls and (pretty much unrelatedly) momentarily turn invisible. Sitting still makes the x-ray vision permanent, while moving causes it to frazzle away and vanish, a neat trick that very subtly paces your progress through the environment as you routinely pause behind cover, observe splicer movements and plan your routes accordingly. Tranquilising darts, one hit melee knockouts and gas bombs all promote a non-lethal approach to combat, though there are properly murderous weapons available to arm yourself with should you wish to draw blood.

You’re still trapped in the submerged metropolis, with the events of the DLC carrying on from where Part One left off, but the plot takes you through some new and never before mentioned locations in Rapture: a bathysphere showroom, a school, a nursery. Elizabeth spills her encyclopaedic knowledge of her surroundings as you explore too, revealing more of the city to lore-starved players. Your objectives are varied, seeing you collecting objects and repairing machines, but they’re never dwelled on for too long. Part Two is short but punchy and fat-free, never giving the sense that it’s wasting your time with dawdling gathering quests and reruns through previously explored areas. 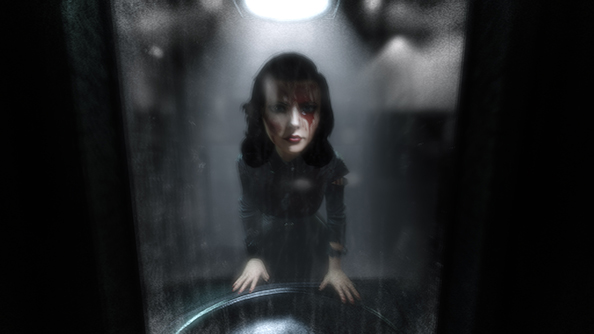 The stealth approach is just about held together by some neutered splicer AI. They’re less aggressive than their previous incarnations and more willing to give up searching for you once you break line of sight. You’ll also come across a Big Daddy, though it’s easier to avoid the thing completely than it is to helpfully utilise it against other opponents in combat. But while enemy forces are neither particularly robust nor especially intelligent, they’re just competent enough to present an enjoyable challenge.

While Part One baited a confused protagonist with the central mystery of who the noir-twisted Elizabeth was, in Part Two your position in Rapture is clear cut from the outset. Your goals are obvious and the characters you’re encountering have been well defined. Not being haunted by a question-dodging mystery lady, it turns out, makes for a more satisfying exposition and resolution. And simply being alone in Rapture again presents a seismic shift for the tone of the game: suspense is ratcheted, stealth makes sense and the contrasting bleakness and beauty of your surroundings is enhanced. It’s nice to look at a big fish and not have somebody comment on it while dynamically leaning on a nearby post and doing an idle animation. 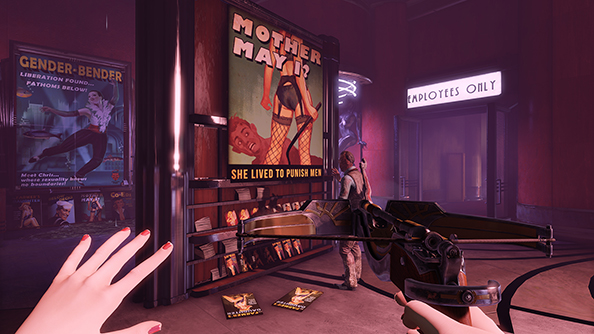 Part Two also ties the characters and technologies of Rapture and Colombia together, presenting a unifying theory of magical things as well as answering questions raised by the more keen players. While there’s perhaps a little too much exposition scrawled down on blackboards and displayed behind unbreakable windows — why one universe’s plasmids are drinkable while another’s are injectable, how Big Daddies imprint on Little Sisters, lore dabbling trivia — the DLC is a frank reveal of how the Bioshock multiverse works on a practical level, managing to tidy up just enough frayed narrative ends to at least resemble a proper merging of the two games’ plots.

Burial at Sea was a little over excited to return to Rapture, donning a film noir trilby that soon fell off to reveal clunky set piece combover, but Part Two is far more comfortable in its own skin. It integrates the fighty and the talky enough to make Rapture feel a more dangerous and believable place, discards the impenetrable conceits with which the first DLC began, and brings an almost seven year old series full circle and to a satisfying end. What a wonderful trick, and a fitting note for one of PC gaming’s best loved studios (as we know them, at least) to bow out on.