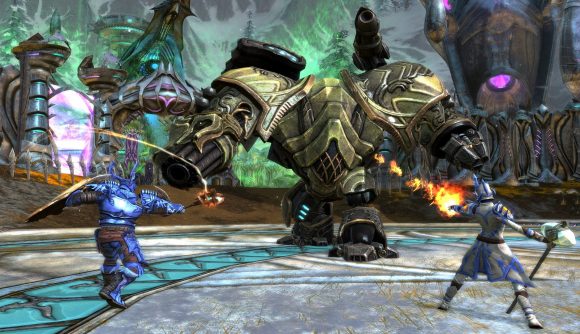 MMO developer Trion Worlds, the team behind titles including Rift, ArcheAge, and Defiance, has reportedly laid off the “vast majority” of its staff. The lay-offs come following the acquisition of the studio by Gamigo, a free-to-play publisher most recently responsible for FPS Ironsight.

The studio issued an official statement about the acquisition last night. It confirmed that “there has been a transaction involving Trion Worlds and its games,” but did not mention the German publisher. That statement also revealed that some members of staff had been laid off, but made no mention of the scale of the staffing changes.

The statement, given to Gamasutra, confirms that “while many of the names and faces you’ve come to know in our studios will remain on through this transition, others will not be making the journey.” Again, the statement itself offers no mention as to the extent of the lay-offs, but sources speaking to Gamasutra claim that nearly 200 people across both the company’s California and Texas studios have lost their jobs as a result of the acquisition.

Reports suggest that only 25 staff have been given the opportunity to remain at the company. More than 200 people were thought to work at Trion prior to the purchase by Gamigo. A press release issued by the publisher this morning confirms the acquisition, making reference to expected profits of $18 million, but makes no mention of any lay-offs or restructuring.

Trion Worlds is just the latest in a string of studio closures and mass redundancies. High-profile examples include the closure of Telltale Games and Capcom Vancouver last week. Elsewhere, Icons: Combat Arena developer Wavedash laid off 80% of its staff with no severance pay. We’ve reached out to Trion Worlds for comment and clarification, and will update this story if we hear back.