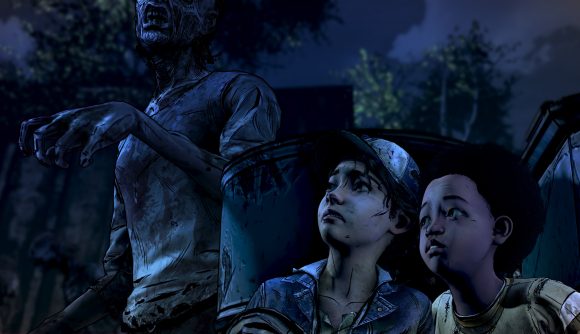 September 22, 2018 Netflix will continue “Minecraft: Story Mode” project, but other Telltale projects are all effectively cancelled in the wake of mass layoffs at the company Friday.

September 21, 2018 Telltale has confirmed it will close following a round of mass layoffs.

Telltale Games, the studio best known for narrative adventure titles like the Walking Dead, will soon shut down. Early reports suggested that around 90% of the studio’s 250 employees have been laid off, and the company has now confirmed that it will close.

An official announcement says that a “majority” of the studio’s employees were let go today, leaving a small group of 25 to “fulfill the company’s obligations to its board and partners” ahead of the shutdown.

“It’s been an incredibly difficult year for Telltale as we worked to set the company on a new course,” CEO Pete Hawley says in the statement. “Unfortunately, we ran out of time trying to get there. We released some of our best content this year and received a tremendous amount of positive feedback, but ultimately, that did not translate to sales. With a heavy heart, we watch our friends leave today to spread our brand of storytelling across the games industry.

According to journalist Jeffrey Grub on Twitter, staff at Telltale numbered around 250, which leaves 90% of the studio immediately without jobs. A source tells Dot Esports that the currently affected employees have been released without severance. The news appears to have hit the studio itself suddenly, as well – the last word from the official Twitter account was only three hours ago as of this post.

An anonymous source tells USGamer reports this small crew is in place to finish the final season of The Walking Dead, after which the studio will shut down altogether. This source says that Telltale has filed for bankruptcy, and projects like The Wolf Among Us 2 and Stranger Things are effectively cancelled.

Another source tells Variety that the small team left at Telltale will be working to finish the Minecraft: Story Mode interactive series the company was collaborating on with Netflix.

However, the deal to adapt Netflix’s “Stranger Things” into a videogame series has now been cancelled, and a source tells journalist Joe Parlock that Telltale had hoped this deal would keep it fiscally viable.

According to the same source, Telltale almost didn't get through Spring 2018. The Netflix deal fell apart, which was supposed to save it.

Telltale says details on what’s to become of forthcoming games will be issued “in the coming weeks.”

Former Telltale narrative designer Emily Grace Buck says a full 250 employees have been laid off, with none receiving any severance. Their healthcare will only last for another week.

To clarify some questions people have been asking (and keep in mind I am NOT a company rep)
– Around 250 people are jobless, not 225
– We did not get any kind of severance
– Our healthcare only lasts for one more week
– Many former employees were contract & can't get unemployment

Our best wishes are with the employees affected.