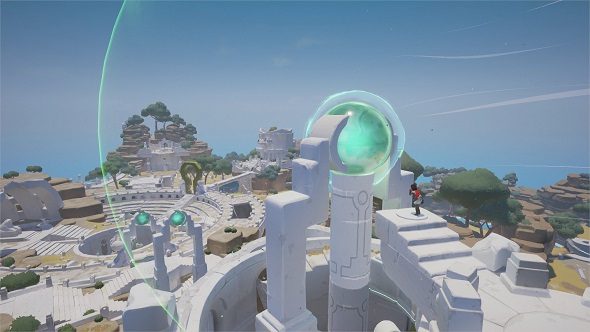 Set to release at the end of the month, Tequila Works and Grey Box have gone into high gear in showing off the sun-drenched action adventure, Rime. In its latest dev diary, the design team go through the process of creating a single in-game puzzle from the initial art work, to building it in the game engine, to adding sound to help guide the player.

For those looking for new worlds to explore, why not try out some of these great PC RPGs?

After the concept and artwork stage, the designers go into “The White Box”, a developer testing area where the team can check that the puzzle can work within the game engine. Once the puzzle has been tested and approved, it is then the job of environmental designers to make the puzzle fit within the game world. “It is not just an artistic process”, says concept artist Elias Sanchez, as artists have to collaborate with designers to effectively translate the puzzle into Rime’s landscape.

Testing the puzzle is then a whole different job, with testers having to “consciously play the game wrong” in order to check everything in between simply doing a puzzle the right or wrong way. This means mashing buttons while climbing, trying to go out of bounds and generally making the pushing the game to its limit. During playtesting, the design team decided to add a fox companion to help point players in the right direction. If you are ever a bit stuck, this mischievous spirit may appear and guide you towards the next location or possible puzzle solution.

Whenever you complete a puzzle, Rime will almost always play a specific sound or snatch of music to signify you have completed it, similar to the jingles in The Legend of Zelda. Many of the game’s puzzles also centre around sound, with some of the solutions being down to the player character shouting in certain areas. As the game has no tutorial or tooltips, it’s important that holistic elements like sound or visual indicators are used to help guide the player, so they only stay immersed, but that they always have some way of finding out a puzzle’s solution.

You can find the whole dev diary above, which goes into greater depth about the mysterious tower at the centre of Rime’s island, as well how the art team reached the final designs of the game’s Shade enemies.