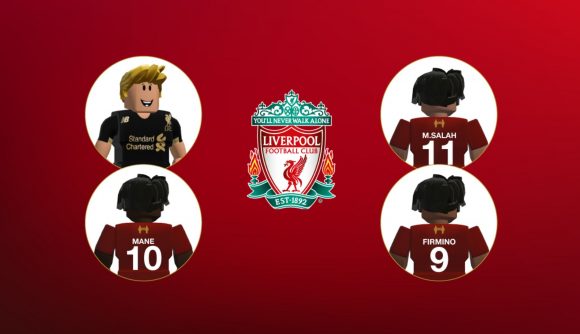 With Liverpool riding high after an near-unbelievable Champions League campaign earlier this summer, you might wonder how things could get any better for Jurgen Klopp and his team. Thankfully, Roblox has stepped in to help the Reds reach even more dizzying heights.

Earlier today, developer the Roblox Corporation announced a partnership with the Merseyside club which will allow players to show their support for the team in-game. For a limited time, you’ll be able to kit your character out in the club’s 2019/20 home kit, complete with its iconic crest.

If you want to take your support even further, the partnership will let you represent your favourite Liverpool players, sporting names and numbers of members of the club’s first team, from star forward Mo Salah to breakout star (and resident PCGN Liverpool fan Iain’s favourite man ever), Divock Origi. The avatar outfits are currently available to download for free via Roblox, but you’ll only have until July 26 to secure one for yourself.

If you’re a die-hard Liverpool fan, you can also get your hands on some extra swag, but they won’t be available to everyone. Junior fans can get their hands on a virtual scarf with the club’s motto – “You’ll Never Walk Alone” – emblazoned across it.

Read more: You can now play Counter-Strike in Roblox

This isn’t the game’s first sporting crossover – earlier this year, Roblox teamed up with WWE to offer fans special WrestleMania avatars. Having watched that second semi-final leg against Barcelona, however, I’m not sure which partnership gets fans closer to the drama.