The Roccat Horde Aimo keyboard is a premium mem-chanical board with plenty to offer membrane-apologists. Although, unlike its Kone and Khan siblings, the Horde Aimo struggles to stand out, and seems like an odd choice to headline Roccat’s Aimo lighting brand.

Roccat’s Aimo range kicked things off with a strong offering in the beautiful Roccat Kone Aimo gaming mouse, and the Khan Aimo – which recently launched as an RGB-laden version of the Khan Pro headset that we’re quite fond of. The arrival of the Horde marks the first time avid Swarm users can reach 75% Aimo utilisation within Roccat’s app, but to somewhat disappointing results. Not least because there’s some sort of missing Aimo link yet to be discovered to take you to 100%.

The board definitively ditches the usual mantra that membrane keyboards are cheaper, watered-down alternatives to clicky mechanical switches, mostly because the Horde Aimo certainly isn’t a budget board. At $90/£90, it’s well up there in pricing to some of our top picks for fully mechanical gaming keyboards.

For the price, however, the Horde does deliver great build-quality, and – while I’m not personally a fan of membrane whatsoever – the Roccat’s membranical keys are pretty responsive and speedy. The board also features five macros, more media keys than you would ever ask for, and a media control wheel capable of even changing the lighting profile on-the-fly. 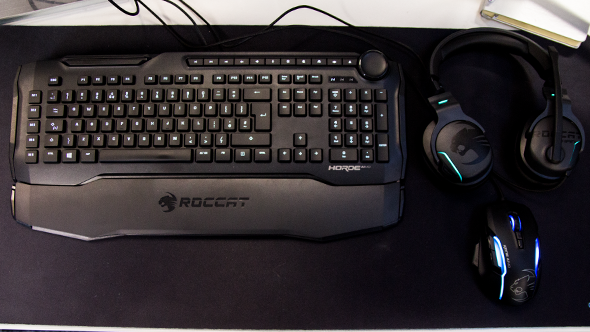 The Aimo suffix denotes that this product works with Roccat’s latest Aimo intelligent lighting system. Aimo allows for reactive and unified lighting that sways and pulses across all of your supported devices – and it has been proven to look spectacular when implemented well, such as with the Kone Aimo. The Horde, however, is considerably hamstrung by its multi-zone lighting.

Membrane keyboards tend to lack per-key lighting compared to the norm among mechanical gaming keyboards. While RGB lighting isn’t usually a dealbreaker among standalone products it is the unique selling point and differentiating factor for Aimo products. So you are better off buying the non-Aimo versions, such as the Khan Pro (which happens to sit in second place on our best gaming headsets roundup), if RGB isn’t your thing.

Unfortunately, the multi-zone illumination of the Horde is a weak link within the ‘unified’ Aimo family. The Kone mouse is exceptionally vibrant – and although slightly less liberal in RGB LEDs – the Khan headset is similarly luminous. These two devices, to Aimo’s credit, feature the sweeping ‘living’ colour changes that Aimo promises, and somewhat highlights the shortcomings of the Horde. You’d be hard-pressed with the Horde to visibly see these nuanced colour changes in any well-lit environment, despite the keyboard offering much more real estate to really make an impact visually. 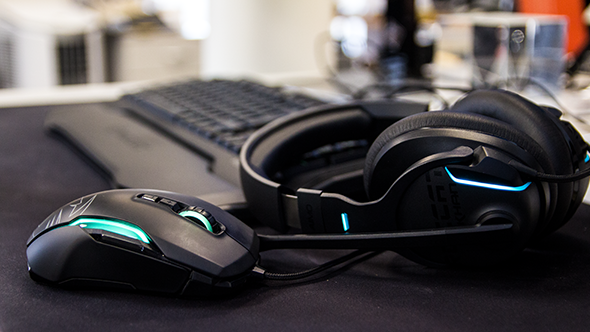 The Horde’s pricing is also somewhat restrictive, it stands at a similar price tag to some great mechanical gaming keyboards, which leaves it as an option only to those who absolutely despise the feel of a mechanical key switch. While the mech-brane switch is a solid implementation, it’s not revolutionary, and I doubt it will convince many mech-fans to make the switch (I see what you did there – Ed).

While the keyboard itself makes for a feature-filled board for mechanical atheists, the lacking RGB lighting with the Horde is unfortunately quite a sour note for the Aimo range. While the RGB-factor is somewhat unified in theory, what you actually receive are products that seem to lack that unity or consistent lighting when actually combined together.

As the current centrepiece to Roccat’s Aimo, it’s a shame the Horde doesn’t push the boundaries a little further – especially when the board itself is well-built and packed with features. We do know Roccat aren’t going to stop here with the Aimo range, and there will likely be more products in every category, but when it comes to gaming keyboards you know what we want to see…

As it currently stands, however, gamers with the funds to purchase the Kone or Khan are likely going to look elsewhere when it comes to the keyboard, subsequently leaving Roccat’s headline Aimo feature gathering dust.

{"schema":{"page":{"content":{"headline":"Roccat’s Horde Aimo is one step forward for membrane keyboards but three back for RGB","type":"news"},"user":{"loginstatus":false}}}}