Roccat is going against the curve with its Vulcan 120 mechanical keyboard. Rather than join the ever-growing swathes of Cherry-MX-equipped keyboards, Roccat has instead teamed up with TTC to create the Roccat Titan – its very own mechanical key switch.

The Aimo range launched as a unified, moving, reactive lighting system. But back when I first got my hands on the original three-product Aimo lineup, I felt that the Horde Aimo gaming keyboard wasn’t living up to the Aimo title as much as I’d like it to – especially when compared to the other Aimo branded products.

The RGB zone limitations and membrane design of the Horde proved to be a tricky needle to thread for Roccat and the luminance suffered. As a result, the whole Aimo lineup suffered too as they depended on a lynchpin product to create a cohesive RGB range.

Ready to make the change to mechanical? Here are the best mechanical keyboards around.

The Roccat Vulcan 120 doesn’t suffer that same fate. The RGB lighting is exceptionally bright, vibrant, and impactful and is the centrepiece the Roccat Kone Aimo and Roccat Khan Aimo have needed all this time.

We’ve already seen what Roccat is capable of with RGB lighting – the Kone Aimo mouse is one of the most stunning implementations of RGB lighting I’ve seen to-date – and with both the Kone and Vulcan in tandem effervescent Aimo flow, the results are quite mesmerising. 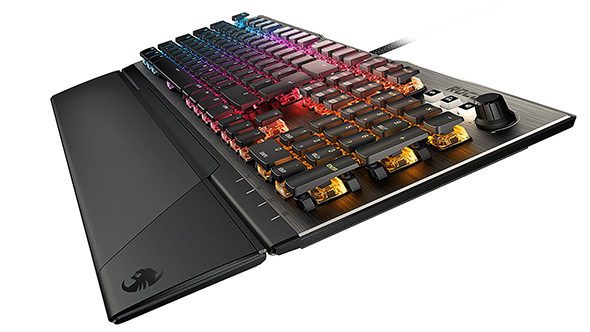 With this in mind, let’s look at how Roccat went about achieving what the Horde Aimo couldn’t, because it’s not your run-of-the-mill RGB mechanical gaming keyboard.

So let’s start with the switches. Roccat has roped in the multi-purpose switch manufacturer, TTC, to help create the Roccat Titan Switch Tactile. This is a tactile switch with a 1.8mm actuation point, but for simplicity’s sake, it’s a most succinctly compared to the Cherry MX Brown. Both feature tactile feedback, and neither feature the loud click that is synonymous with blue switches.

In reality, the two switches are different in both feel and performance, but the core concept of both remains a heady mix of typing and gaming prowess – somewhere between reds and blues in the mainstay Cherry lineup.

Immediately, I felt a difference between the two when it came to the location of the tactile feedback within the key press. The Cherry Brown allows for a slight depression before the bump is felt and the switch actuates, whereas with the Roccat Titan the bump is immediate. The bump is also a touch more pronounced with the Cherry Brown switch over the Titan alternative – which favours a lighter touch.

There’s a bit more wobble in the key switch itself within the board compared to most Cherry Red implementations I’ve come across in popular gaming boards, which could be localised to the Vulcan itself. But don’t let this deter you. The Titan switch is actually fantastically stable and keycap wobble is minimal and largely no issue whatsoever. 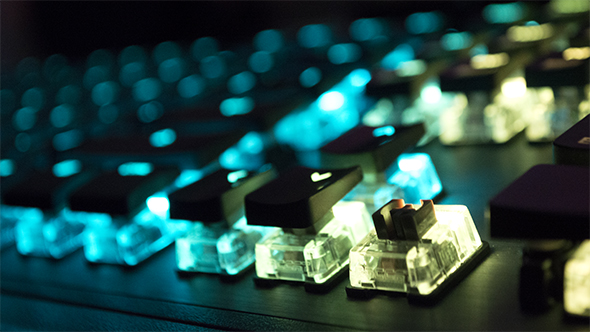 With the Roccat Vulcan, that feature is the keycaps. They feature a shallow and likely-to-be divisive design, more akin to laptop keys than the usual desktop fashion, creating a unique and very Aimo-complimentary aesthetic.

The Vulcan’s aesthetic is also one that was consistently the subject of comment by all passers-by. Not one of my colleagues that came into contact with the board managed to hold back a comment on its style. These were almost always favourable too, minus a few who couldn’t stand it’s incongruities.

As for functionality, a multi-function wheel is located on the upper right of the board. This allows for control of various functionality through three buttons: mute, lighting, and volume. Remaining media and profile keys are secondary to the function row, and six programmable macro keys are secondary to the formatting and navigation keys. The Vulcan also features memory and a 32-bit ARM processor onboard to store all of your macro settings without necessitating software or drivers. 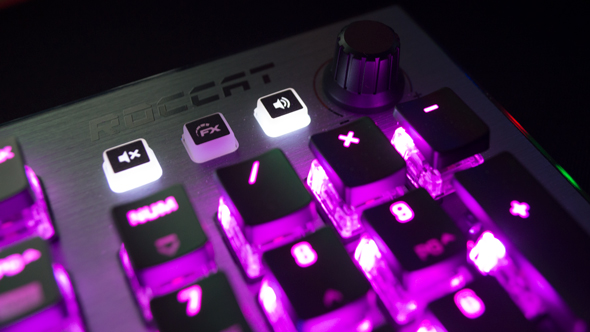 There’s no USB passthrough with the Roccat Vulcan. But, the USB cable from the device is thin and light as a result. There’s also a wrist rest that magnetically attaches securely onto a thin indented front edge of the low-profile board. The wrist rest is very slim, however, and does little to really support your wrists. Future designs could definitely benefit from a wrist rest that is a little more plush, or at least substantial.

As a complete set, the Roccat Aimo brand is finally a cohesive, unified, RGB ecosystem thanks to the Vulcan, and from here can branch into more budget-friendly alternatives. The Vulcan costs £150, but there are cheaper alternatives in the Vulcan 80 (single-colour LED and no wrist rest) and Vulcan 100 (no wrist rest) – at £120 and £140, respectively. 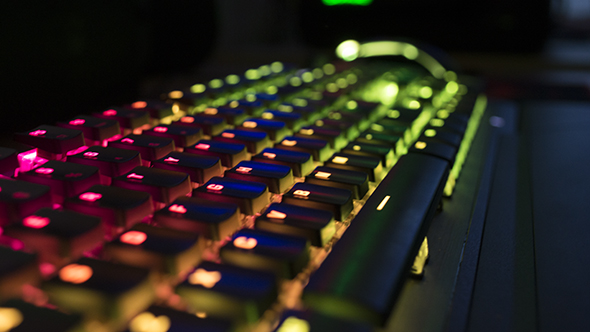 The Roccat Vulcan finally completes the triple threat of the Aimo lineup. In every area – whether that be headphones, mouse, or keyboard – Roccat offers something that is worthy in its own right to sit on gamers’ desks. But which also altogether makes up a brand well-positioned in the market.

Designing your own key switch is a mammoth task and Roccat isn’t short of competitors in this field. Its first attempt has payed off, however, and expanding this range down the line – for example with linear switches or something truly experimental – will only add more value to this initial foray with the Titan Switch Tactile.

It’s one thing to take a popular switch and make a good keyboard. It’s another thing entirely to design your own switch and package it in a compelling flagship product with only a single attempt. The Roccat Vulcan 120 succeeds with flying colours.