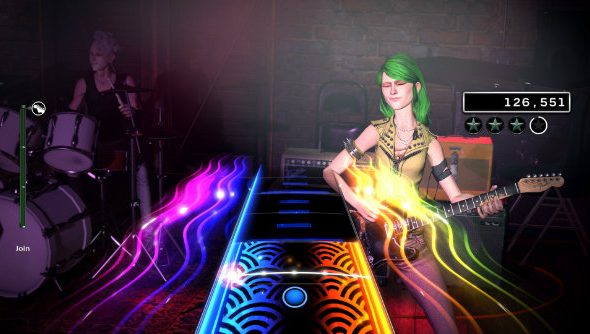 Harmonix have launched a Fig crowdfunding campaign to bring Rock Band 4 to PC players. If successful, we could see Rock Band 4 on PC as early as autumn.

The funding goal is pretty hefty, but it’s below the estimated cost of the game, with Harmonix putting up 25% of the rough development costs themselves. Rock Band 4 is asking for $1,500,000, but there’s a twist – as well as the usual backer rewards, people who pledge will have the option to become an investor and receive a percentage of game revenue.

Some of the backer rewards are really cool, with the biggest pledges offering the chance of having dinner with Tim Schafer, flying in a helicopter and getting your own song into the game as free DLC when it launches. The latter seems like an incredible opportunity for an upcoming band with a chunk of cash to spare. Perhaps they could launch a Kickstarter to pledge $25,000 to Rock Band 4’s Fig campaign.

It’s not all money talk, though. Rock Band 4 on PC will feature some new bells and whistles and will provide players with the tools to author their own songs, publishing them via the Steam Workshop, which sounds like a brilliant idea.

The game will also launch with all the updates and features released on console so far including: World Tour Campaign Mode, Freestyle Guitar Solos, wireless guitar, drum kit and next-generation microphone support, and will include 65 songs, plus up to 33 additional songs for backers on Fig. Over 1,700 additional playable songs will be available as downloadable content.

Check out the Fig campaign for Rock Band 4 here.