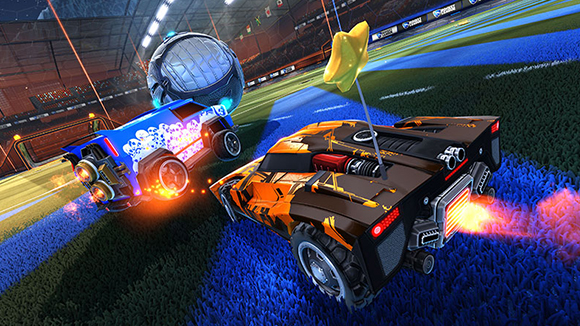 Rocket League provides a wide selection of cosmetic goods through its loot box system, and now developer Psyonix has broken down odds for those crates, letting you know exactly what to expect when you drop money on the system.

When you open a crate – either with a paid key or a free decryptor – the game chooses a rarity level. Rare items have a 55% chance of dropping, Very Rare is is 28%, Import is 12%, Exotic is 4%, and Black Market items have a 1% drop rate. The system then chooses the particular item from that rarity group. Then, it decides whether the item receives the Painted or Certified attribute – a 25% chance for either.

All paint types have the same chance of appearing, and the system works identically for crates and Golden Eggs, though the latter pulls from a much wider pool of items making specific drops in each category rarer. All of these stats apply going back to the system’s original release in September 2016, and the developers are providing further clarifying points on Reddit.

So why are these disclosures coming now, nearly two years after the loot crate system was implemented? Psyonix says it’s in preparation for the game’s upcoming release in China. Chinese law regarding loot boxes requires the disclosure of drop rates, and the rates for that version of the game will be different from the Western release – hence, accurate numbers are now provided.

A handful of new and extended regulations for loot boxes in Europe from sources like the Dutch Gambling Authority have also recently gone into effect, though it’s uncertain whether those provided any pressure for these disclosures. Rocket League is also getting a progression revamp via the new Rocket Pass system, which takes a cue from games like Dota 2 and Fortnite to provide an avenue for new unlockables.