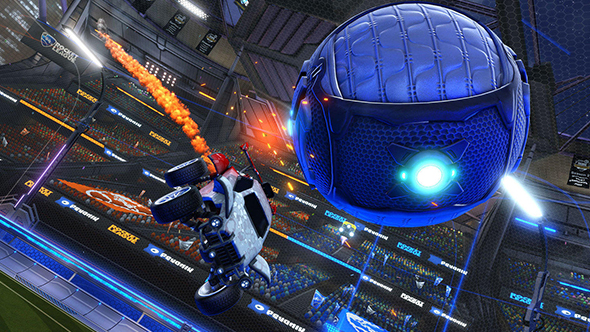 Update, June 19: Rocket League’s Rocket Pass is set to launch soon and so Psyonix has provided more details on what to expect.

Rocket League will introduce a new progression system later this summer, with the Fortnite (and Dota) inspired Rocket Pass offering a new way to unlock in-game items and cosmetics. It’ll come in free and paid iterations, with both versions offering new rewards to keep you playing over time.

The free Pass will let you earn customisation items, player banners, titles, and decryptors, and you can upgrade to premium at any time for ten keys – $9.99. Whatever tier you’ve made it to on the free Pass, you’ll stay there when you pay, unlocking whatever new items would come with that progress.

If you prefer your cars in a more traditional setting, don’t miss the best racing games on PC.

Premium Passes will also let you earn new car bodies and keys, and yes, you’ll be able to use those keys to purchase future Passes as they become available. You’ll also get XP boosts and awards allowing you to progress through the ranks more quickly which, combined with the flattened leveling curve Psyonix previously announced, will make it much easier to keep progressing at higher levels.

Unlike Fortnite, the Rocket Pass won’t feature specific gameplay challenges, though there will be a weekly win bonus as part of a general progression update.

“We are being careful about introducing ‘challenges’ as we don’t want to disrupt the competitive balance of Rocket League by encouraging users to hunt down specific stats like Saves or Assists,” Psyonix says. With that in mind, the studio is still open to “safe ways” of offering specific goals in the future.

On Reddit, Psyonix reps have been answering specific questions in even more detail. They estimate it’ll take roughly 100 hours to complete a Pass and plan for the first version to run for about three months. Despite Rocket League’s cross-play, you won’t be able to take Rocket Pass progress across platforms, though, it is said that “it’s our hope to do this in the future, RocketID is the first step towards a Psyonix Identity you can link to.”

Rocket League’s been getting plenty of updates to keep its cosmetics fresh, with partnerships ranging from WWE to Jurassic Park, and there are no signs of those supersonic acrobatic rocket-powered battle-cars slowing down any time soon.