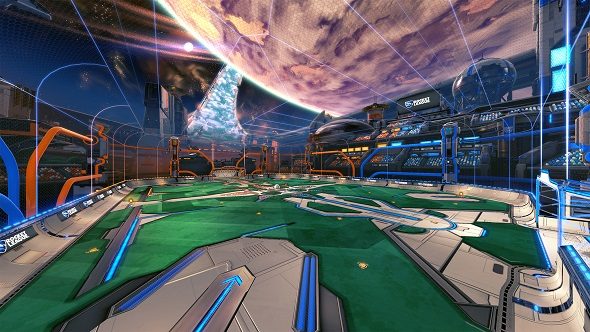 No matter your stance on Rocket League’s more experimental maps, it’s no secret that their presence is controversial. Some people like Wasteland, Starbase ARC, and Neo Tokyo (now Tokyo Underpass), others think they take away from the core concepts of Rocket League. Neo Tokyo was redesigned, but Wasteland and Starbase ARC have remained in both competitive and casual play – until now.

All maps in competitive and casual matchmaking will now be standard maps, the same size and shape. This was announced today in an official post, stating that the current versions of Wasteland and Starbase ARC are now called Badlands and ARCtagon.

Wasteland and Starbase ARC will now only appear in matchmaking as standard maps. The justification for this – as this is a change to Psyonix’s stance on the matter – is threefold. Straight from the announcement:

“We see Rocket League as a digital sport. As such, we think standardization is important and necessary to provide a level playing field and foster consistent competition across all skill levels and events.

“We introduced non-standard arenas partly to provide variety for pro play, but they have not been embraced. Given the success of RLCS and Rocket League Esports in general, we no longer feel that map variety is needed or appropriate for the competitive scene.

“Rocket Labs showed us that only a narrow set of arena designs would be well-received by the Rocket League community. Even the designs that more closely resembled conventional Arenas (like Octagon and Starbase) have been extremely divisive. Ultimately, the alternate layouts we devised simply didn’t add enough strategically to offset the corresponding loss in predictability and muscle memory.”

This change will come into play with Rocket League season 6 when it rolls out this autumn. Don’t expect many more non-standard maps, either, as the development team have “decided to focus on Standard Arenas going forward.” I’m personally quite disappointed, but then I don’t play the game in any competitive manner.