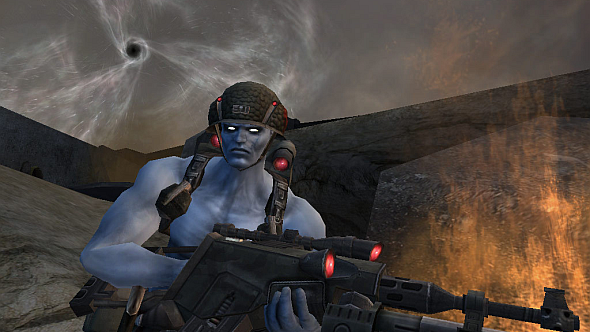 British comic 2000 AD gave us many great characters, such as the almost perfectly badass Judge Dredd. Another is Rogue Trooper, the renegade Genetic Infantryman (GI) who appeared in his own BAFTA-nominated videogame in 2006.

Which of these classic PC games need their own remaster?

Happily, we learned in February that that game is getting a remaster, entitled Rogue Trooper Redux. It’s set to bring a classic game all up to date, and if you missed the original, developers Rebellion have released a video that’ll catch you up on the backstory.

Presented by 2000 AD feature writer Michael Molcher, the video is a nice introduction to Rogue Trooper set against panels of his comic and footage of both games, concluding with a lavish shot of the remastered protagonist himself.

Rogue Trooper is bio-engineered to survive the poisonous atmosphere of New Earth, carries the consciousnesses of three dead GIs in biochips implanted in his equipment, and is the sole survivor of a massacre that wiped out his comrades. Designed for war, and driven by revenge, he’s the ultimate soldier.

If you don’t mind the classic feel, you can try the 2006 original on Steam here for £6.99 ($9.99). For more information on Rogue Trooper Redux, check out its website, and for more on the weird and wonderful world of 2000 AD, check out theirs.