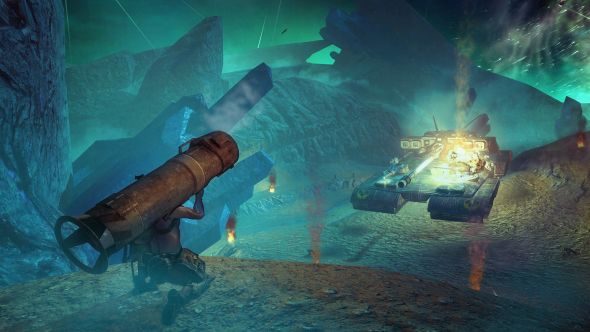 The trouble with a remaster is you’re stuck with the original in every way you can’t spruce up. The trouble with a remake, of course, is it’s a hell of a lot harder to do. Rogue Trooper Redux is different enough that it seems like the latter, but retains just enough of the jank – and the bombast – that you know it’s the former. You’ll see what I mean in the first gameplay trailer above.

Here’s every upcoming PC game you should be thinking about.

The good: it looks mad as hell, campy as anything, and the simplistic style means there’s more enemies, bigger tanks (really, really big tanks), all of which makes for a great visual spectacle, if not an amazing technical one. You don’t get a lot of black-hole skyboxes in games any more, nor the simple joy of killing three enemies with one barrel.

That basic ’00s shooter joy – so well executed in recent years by the likes of Wolfenstein and Doom – does have its downsides when implemented this way. Those animations are, well, not good. Those mole tanks simply disappear.

Despite that, this rehash of the game might be for you if you’re looking for a bit of nostalgic time travel. It’s out later this year and, while no price has been announced, will probably be cheaper than a full-price game.