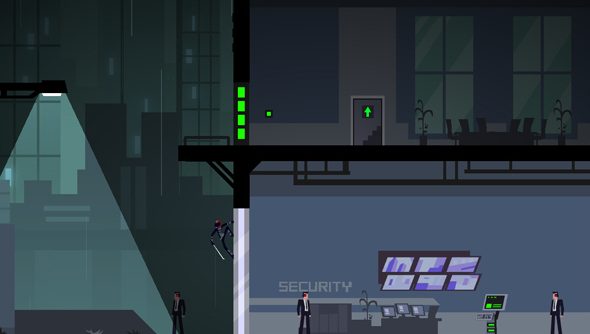 Ronin is a turn-based stealth game, which has started to make tremendous sense as a concept ever since I a) Invisible, Inc. came out and b) my realisation that everything from Thief to Metal Gear to Splinter Cell has the player working in phases: hide-survey-execute. Why not make them explicit?

It’s just now popped onto Early Access for a spot of control and difficulty tweaking – but it’ll be out in under a month.

In Ronin, you’re tasked with forcibly removing the senior board members of a powerful corporation – and to do that you’ll move through fifteen Gunpoint-ish levels step by step (not to mention leap).

Options come in the form of tools: will this turn belong to the katana, the razor wire, the grappling hook or the holographic replicator?

“Ronin is mostly content complete and a full experience at this point,” wrote developer Tomasz Wacławek.

“The only intended changes from community feedback will be tweaks to gameplay, controls and the difficulty curve. Other features or modes might be added based on community feedback but the overall scope of the game will not change.”

The Early Access version is already playable from start to finish, and its price will remain the same – although it’s currently 10% off at £8.99.

Think you’ll allow Ronin to creep up on you?