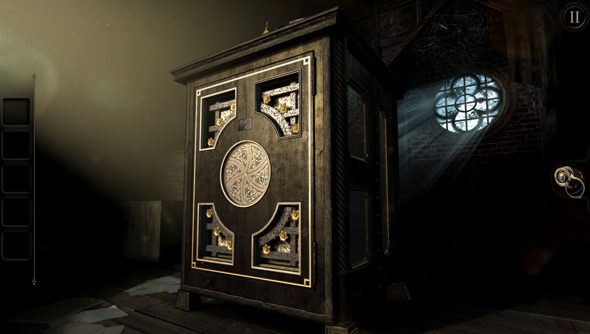 What reason have Fireproof Games to be nervous? Their debut game has sold like gangbusters for the last two years. It won them a bloody BAFTA. And yet the prospect of porting The Room from mobiles to the PC had them quaking in their boots.

“We don’t ever want to release something that PC gamers could accuse of taking the piss out of them, you know what I mean?,” said Fireproof co-founder Barry Meade.

The Room was released on Steam two days ago. But Fireproof have “no idea” how it’s going to do, and the history of Valve’s great, grey platform for all PC gaming intimidates them.

For that reason, the developers avoided addressing the idea of a PC port for a year. But eventually they came to a realisation.

“We thought to ourselves, look, point-and-click games are still plugging away on PC, and they’re making a bit of a comeback,” said Meade. “If you take away the touch controls of our game, it’s just a point-and-click adventure.”

The game’s conceit sees players trapped in the titular room, working to undo a series of complicated doohickies on a box at its centre. Most of the puzzles from the original game have survived the transition to PC with new, mouse-based methods of object manipulation. A few had to be entirely reworked.

“Although we’re very aware of the loss of the feeling of tactility, the actual mechanics behind the game and everything else that the game managed to achieve well is still there,” said Meade.

“So we thought, in that respect, it’s still a short game, but it’s as good as any other point-and-click adventure on the PC. After that, you’re just talking about taste.”

Meade pointed out that there is “no business case” to make for the port.

“Who buys iPad games on Steam?,” he asked. “But we were just like, fuck it. This is what we want to do.”

I’d personally like to hear ‘fuck it’ used more often as a business case. How about you?