I never got to play the Akira videogame that came out on the Nintendo Famicom console in 1988 – on account of my not being born for another six years – but I’ve been led to believe that there’s a reason nobody has tried to make an Akira game since: it was a stinker. However, I did get around to watching the movie that spawned it, and like thousands of others became enamored with its setting, art style and motifs of corporate inhumanity and youth revolt. Ruiner is the Akira game I always wanted, a bold and bloody stampede through a cyberpunk city that’s driven entirely by kineticism.

For more intriguing, low-budget wonders, check out the best indie games on PC.

But let’s start with the basics: Ruiner is an isometric action shooter where movement reigns supreme. You run around using the WASD keys, but apart from picking up weapons, using your shield and skimming through text, every other move and action is assigned to your mouse. That includes aiming, dashing, targeted dashing, shooting, melee, throwing grenades and switching between guns and melee. It’s an incredible amount of control to assign to such a tight physical space, but it’s essential to the pace of Ruiner’s intense arena battles that every control is easy to find and switch between with total precision. 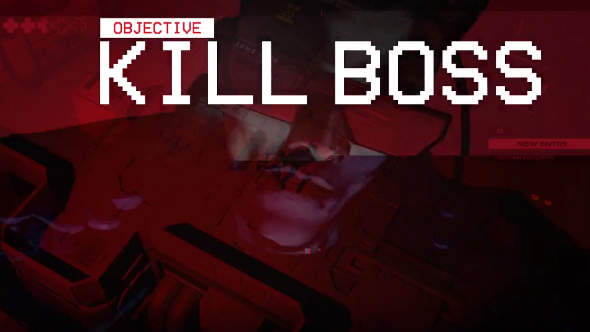 Fights take place in confining arenas, where new foes enter the fray every few seconds, either running in from the sides as lone combatants or deploying from above in groups of three or four. You have to kill quickly to keep the number of enemies manageable, and to do that you have to dash around each arena like a ricocheting bullet in a Korn video. For short distances the standard right mouse button dash will suffice, letting you get close enough to brain nearby baddies with your trusty lead pipe or quickly escape an incoming shotgun blast. More complex scenarios require you to use targeted dashes, which let you slow down time in order to plot a sequenced course of dashes to make.

Here’s why those targeted dashes are important: imagine you’re in an arena with a boss and some henchmen and there’s an automatic shotgun on the floor that would let you turn them all into crimson gloop in a matter of seconds. Running up to it and grabbing it will get you killed – trust me, I tried. Likewise, dashing to pick it up and then dashing away to safety will leave you damaged and still facing five enemies, which is far from ideal. The correct course of action is a targeted dash, first to the closest henchman, then to the two standing next to each other, then to the automatic shotgun – don’t forget to tap E at just the right time to pick it up – and finally to the side of a shipping container you can quickly duck behind to avoid any incoming fire. En route to the first bad guy you’ll want to switch to your lead pipe with the mouse wheel, taking care to time your swing just right so that it falls between the miniscule window of opportunity before the second dash kicks in. Same goes for killing the second goon. Once the sequence is over you get to wrap a tidy bow around the whole set piece by charging out from behind the container and unloading every shell into the boss and his one remaining subordinate. 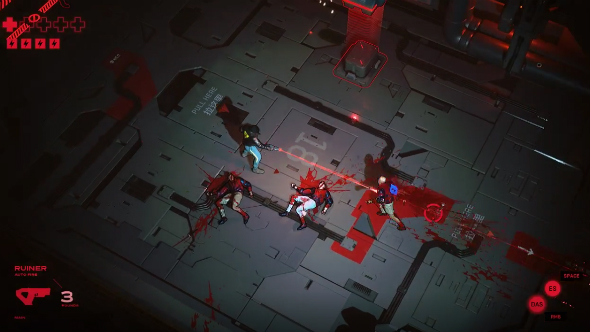 For context, all of that plays out in just over eight seconds. To carry out all of that, or to even think to activate the ability in the first place takes a certain presence of mind that only comes with dying to similar situations repeatedly. Ruiner is not an easy game. There’s a catch too: targeted dashes deplete your energy, so you can’t rely on them to see you through every encounter. Your enemies will dash as well should you try to distance yourselves from them, ensuring every fight stays as tense and fast-paced as possible – there is no escape in an arena, and Ruiner makes you feel that in your sweaty palms and quickened heart rate.

Those physical sensations are mirrored by some truly menacing sound design. The soundtrack itself is a brutish clash of heavily distorted electronica and moody synthwave that’s penetrated by audio glitches, blaring sirens and the echoed screams of those you slay. It’s an oppressive soundscape, but it’s a perfect accompaniment to the gameplay. The visuals are just as suffocating, every surface in sight a cold slab of stainless steel lit by searing flashes of red neon. Excised limbs and generous streaks of blood confirm that Ruiner isn’t shy about gore either, and the occasional digital overlays demanding you KILL BOSS do an excellent job of placing you firmly in the thick leather boots of the wired killer you’re controlling. 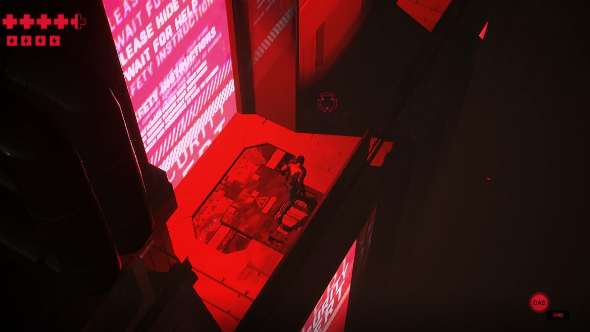 Of course this is only one side of Ruiner, and I’m assured by the Devolver Digital PR overseeing my demo that there’s much, much more to the game than combat. Indeed, developers Reikon Games have previously shown off wandering through city streets, talking to NPCs and buying upgrades from vendors in the city slums. Having only played the brash and bloody opening 20 minutes of Ruiner, the idea of switching gears so dramatically to area exploration and dialogue-driven gameplay is a slight concern. But the backgrounds of Reikon Games’ four co-founders – whose work includes the Witcher series, Dying Light, This War of Mine and Shadow Warrior – suggest they have expertise in both areas.

And this is a world that deserves a solid narrative, with so many facets already demanding explanation or fleshing out. I want to know more about the city of Rengkok, more about the cybernetic sociopath in leather and workman boots that I’ve been controlling, more about the HEAVEN corporation that watches over the cyber metropolis, and more about the hacker that’s invaded our nameless protagonist. I also want to know more about the LED visor he wears that displays messages and images at the whim of the hacker controlling him. Or, now that I think about it, whether I too could get away with wearing blue trousers with a single banana-yellow pinstripe running down each leg and a heavy biker jacket on top. Probably not, but you get the point: Ruiner oozes intrigue and cool. 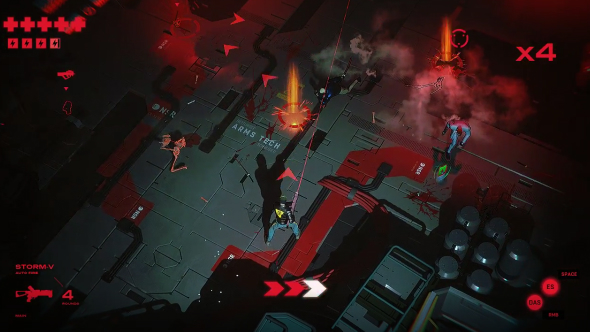 I want more, and nowhere near enough games leave me feeling that way after such a short demo. The combat is hard as nails, but it’s also fun. Really, really fun. Zipping around miniscule arenas, switching between weapons and abilities without a moment to spare and constantly treading a fine line between mastery and total failure – Ruiner’s combat feels fiendishly good. Couple that with an accomplished aesthetic and a soundscape that could give Hotline Miami’s pulsing audio a run for its money and you’ve got a tantalising prospect on your hands. We’ll find out if its remaining elements come together as neatly when it releases later this year.

Looking forward to Ruiner? Let us know in the comments below.